Flash in the Pan: Egg salad 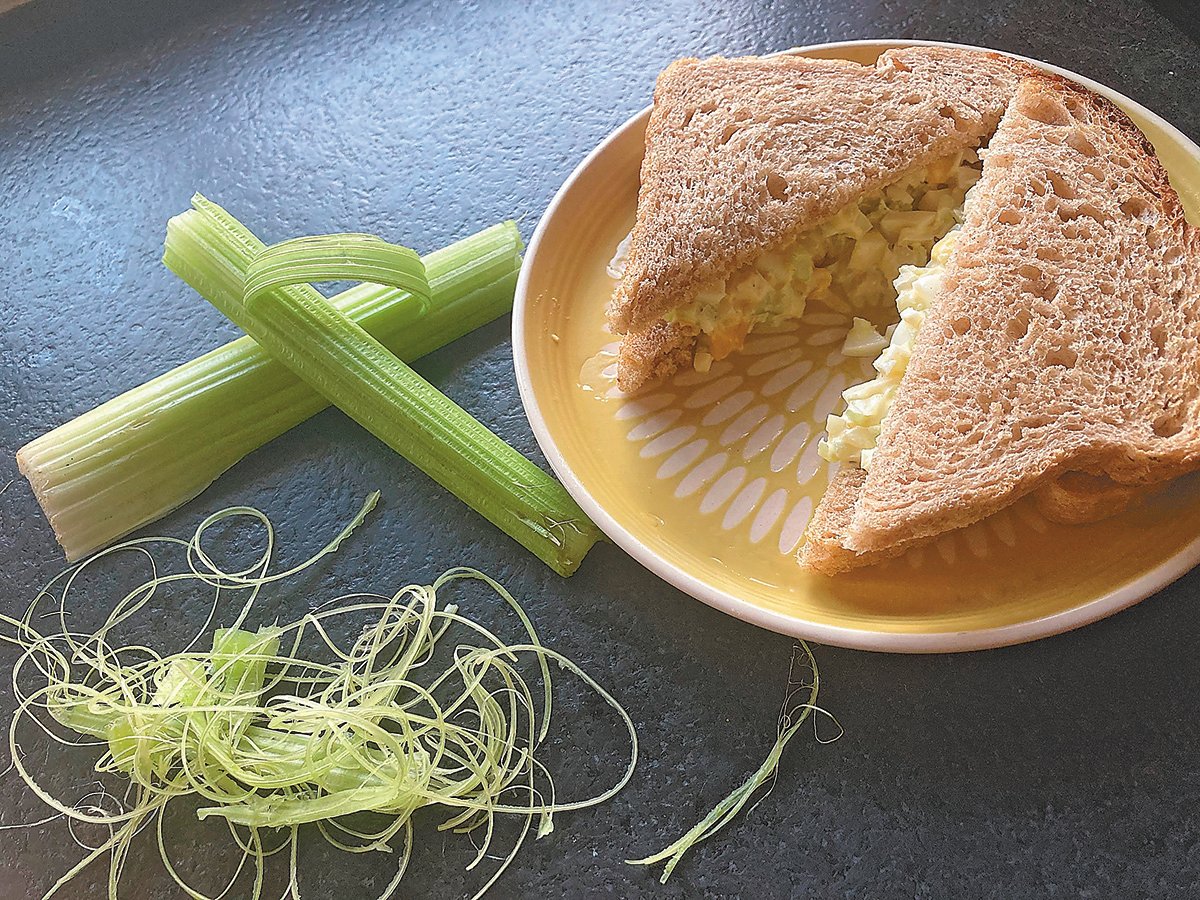 Once, when my mom was out for a visit, she made egg salad sandwiches. The kids wolfed them down before I had a chance to nab a sample. Their mouths were still full when they asked for another round.

I paid close attention as she prepared another batch and watched her pull a move I didn’t even know existed.

She snapped a piece of celery in half, leaving the two pieces connected by the fibers that run down the ridge of a celery stalk. She pulled the two pieces apart, yanking the strings from both pieces at once. Then she hunted for more, digging and tugging out the fibers with the tip of a knife. The de-stringed celery had a glowing, freshly scrubbed look, while the strings sat in a tangled pile like a green hairball. The resulting egg salad, which I managed to taste, was crunchy and soft, chunky yet smooth.

Next time you want to give someone the royal treatment, peel their celery. With Mother’s Day coming up, now is your chance. String-free celery is a luxury on par with breakfast in bed, minus the mess.

Until then, I had been under the impression that chewing a cud of twine was just the way celery eating went. The new way, crunchy and juicy but not chewy, ushered in a brand new celery honeymoon.  More than once, I’ve de-stringed a piece of celery for egg salad and then impulsively popped it into my mouth like a Twix bar.

Pulling those strings will make any celery snack more palatable and won’t leave your heart deprived of fiber, because there will still be plenty left in that string-free stalk.  If you could somehow remove all the fiber from celery, there would barely be anything left but a green column of water.

Mom lives alone and spent most of her 91st year in near isolation thanks to the virus. In January, she came out to stay with us for a while. Now, we are on the cusp of our first Mother’s Day under the same roof in decades.

The problem with Mother’s Day is that if we choose one specific, extraordinary day a year to pamper, remember or otherwise celebrate the moms in our lives, we simultaneously create 364 days of ordinary treatment.

Nobody’s mom is getting any younger, and those who’ve already lost their mother, or never experienced what it’s like to have a mom, might advise you to treat every day like it’s the last Mother’s Day on Earth. Of course, we should pamper our moms, but let’s remember to learn and absorb as much as we can, too.

These days, when mom makes egg salad, I do the heavy lifting and fiber pulling, and she leans against the counter, watching and tasting progress. The salt has to be just right. And you can’t overwork it. Little things. But if you don’t do the little things, the kids will complain.

As for mom, she won’t complain, even if you leave the string in. She never complains. It’s a lesson I hope to learn some day myself. In the meantime, I’m going to keep doing the little things for her that she used to do for me. In life, as in egg salad, the little things add up.

Boil the eggs for nine minutes

Mix them with onion and celery

50g onion (about a 4th of a medium sized onion)

Heat enough water to cover two eggs by at least an inch. When it reaches the boil, carefully lower the eggs into the water with a spoon. Boil for nine minutes. Remove the eggs and place them in cold water. When they are cool enough to work with, peel them.

Break the celery stick in half. If the two halves remain connected by threads, gently pull the two pieces away from each other such that the strings pull out. Once they are separated, remove any more strings you can by digging them out with the tip of a knife and pulling. You don’t need to fuss about trying to remove every single fiber. But every bit that you do remove will make the salad a little easier to chew.

Mince the celery and onion together. Chop the eggs as finely as possible without turning them into a paste and add them to a bowl. Add the minced celery and onions, salt and pepper. Gently mix with a scooping motion to avoid crushing the eggs. Taste to check seasonings. Gently fold in the mayo.