Flash in the Pan: Grilled pizza 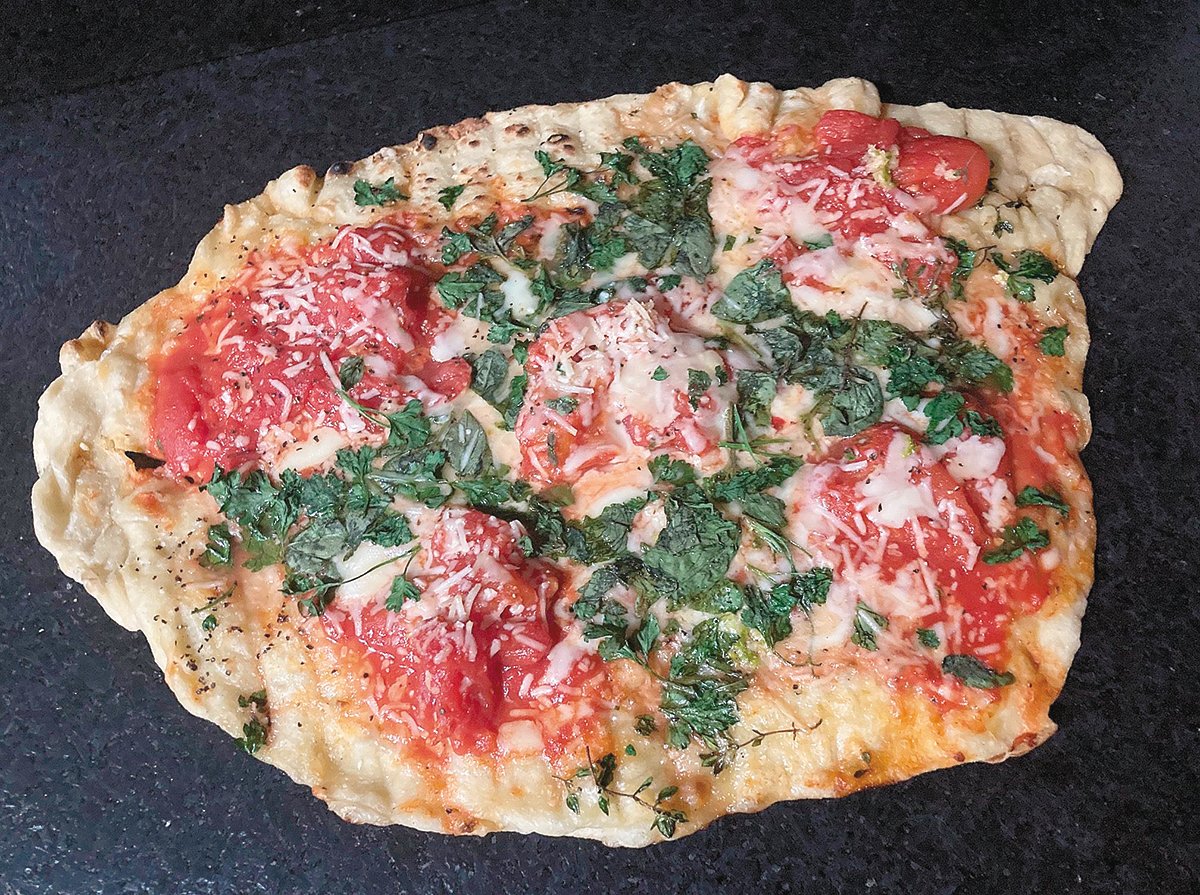 Grilled pizza does not immediately sound like the highest use of a grill or a pizza. You’d think the bottom of the crust would burn into a blackened crisp, while blocking the coals from melting the cheese on top. But that notion didn’t seem to dawn on Johanne Killeen and George Germon, two art students from Providence, Rhode Island, who met while working for Dewey Dufresne, a young chef with a big future of his own.

When Dufresne’s restaurant closed, he went to New York and opened Al Forno in 1980. Al Forno means “from the oven,” an unlikely name for the birthplace of the world’s first non-baked pizza. But the restaurant space came with a grill, and they wanted to use it. Their pizza pie became that grill’s reason why. I’ll be making it all summer, because it’s limit is the sky.

It was the early-’80s, and while Germon and Killeen were inventing local grilled pizza in Providence, I was eating oven-baked pizza from Armando’s Pizza in Cambridge, a mere 50 miles away, quite certain that pizza couldn’t possibly get any better than that. My friend Michele, who grew up in Providence, knew better. Although she never ate there,

Al Forno cast a long shadow. “Eating there was something that rich people did,” she recalls. “It’s where my aunt’s boyfriend took her on fancy dates.”

Grilled pizza wasn’t the only way Al Forno was ahead of its time. In those days, few diners had heard of “pesto,” much less farm-to-table. In order to serve pesto, Al Forno contracted with a local farm to grow the basil.

As for the grilled pizza, it succeeds in spite of the obvious reasons it shouldn’t. Or perhaps these hurdles are why the pizza is impossibly good. The extra-oily, extra-thin crust cooks quickly, all the way through, with no gooey inside to worry about. And it won’t stick to the grill.

That smoky, thin crust has magical qualities, at once crunchy, crispy, chewy and cracker-like, with a charred but hopefully not burnt bottom. It’s topped with a juicy sauce filled with aromatic herbs and the occasional pungent intrusion of half-cooked garlic, all held together by cheese.

If you know what you’re doing, you could grill a fine pizza with a hunk of store-bought dough, a jar of sauce, and a bag of shredded cheese. But there are levels to this. Once you get the basic hang of grilling pizza, you can progress to thinking about toppings. And some day, perhaps, you’ll be ready to contemplate dough mixing. I am not there myself, but luckily I can get decent pizza dough at my local store. With the fuss of crust, I can focus on toppings, and grilling.

The pizza at Al Forno came in many flavors over the years, the likes of nettle pesto, peaches and prosciutto, fried calamari and others, constrained only by the chef’s whimsy. Once you get the hang of grilling a pizza, the pre-cooked crust becomes a blank slate for whatever seasonal and creative toppings you can imagine. But a good place to start along the pizza-grilling path is the Al Forno margherita pizza, the Italian version of basic cheese and tomato sauce.

Germon and Kilheen were not shy about discussing the margherita that put them on the map, and I have read every one of their interviews on the subject that I could find.

They use maple charcoal, but I think any pure hardwood charcoal is fine. I use a simple Weber grill, which works great.

Place the dough ball in a bowl and pour ¼ cup oil over it. Roll it in the oil to coat it all around and leave it to soak. Light the coals and when they are about halfway ready, spread them evenly about 5 inches below one side of the cooking grate.

While the coals catch, remove the dough and place it on the back of a cookie sheet. Press it into an oblong shape about the size of the pan, and less than ¼-inch thick. It’s OK if some parts are thick and others thin. That’s part of the art.  f you stretch the crust so thin that a hole opens up, you don’t try to patch it. This is an artist pizza. Just don’t add any toppings to that negative space and you’ll be fine. Add the minced garlic to the bowl with the remaining oil. Hand-crush the tomatoes and mix in the basil, thyme and parsley.

When the coals are a bit past their prime and not burning quite so aggressively, lift the crust by two points on the same edge and toss it onto the hot side, like you’d whip a fresh sheet onto a bed.

After about a minute on the grill it should start to puff up. Carefully tug up on an edge and peek at the underside. After another 30 or so seconds, before it blackens, grab the edge and flip the crust onto the cool side of the rack. Please note that it’s impossible to give exact cooking times because they depend on the heat of your coals and their distance from the grill.

While it’s still piping hot, immediately brush or rub the newly-browned side of the crust with the garlic oil. Sprinkle on the fontina and then Romano cheeses, and spoon on the herbed crushed tomatoes in dispersed little piles. Sprinkle the salt, pepper, pepper flakes over the pizza.

With tongs or carefully with your fingers, slide the pizza onto the hot side, over the coals. Cook it as long as you can, ideally about four minutes, without smelling any burning crust. If it starts to blacken, pull it to the non-hot side of the grill and put the lid on until the cheese melts. Cut into artsy pieces with cooking scissors and serve.