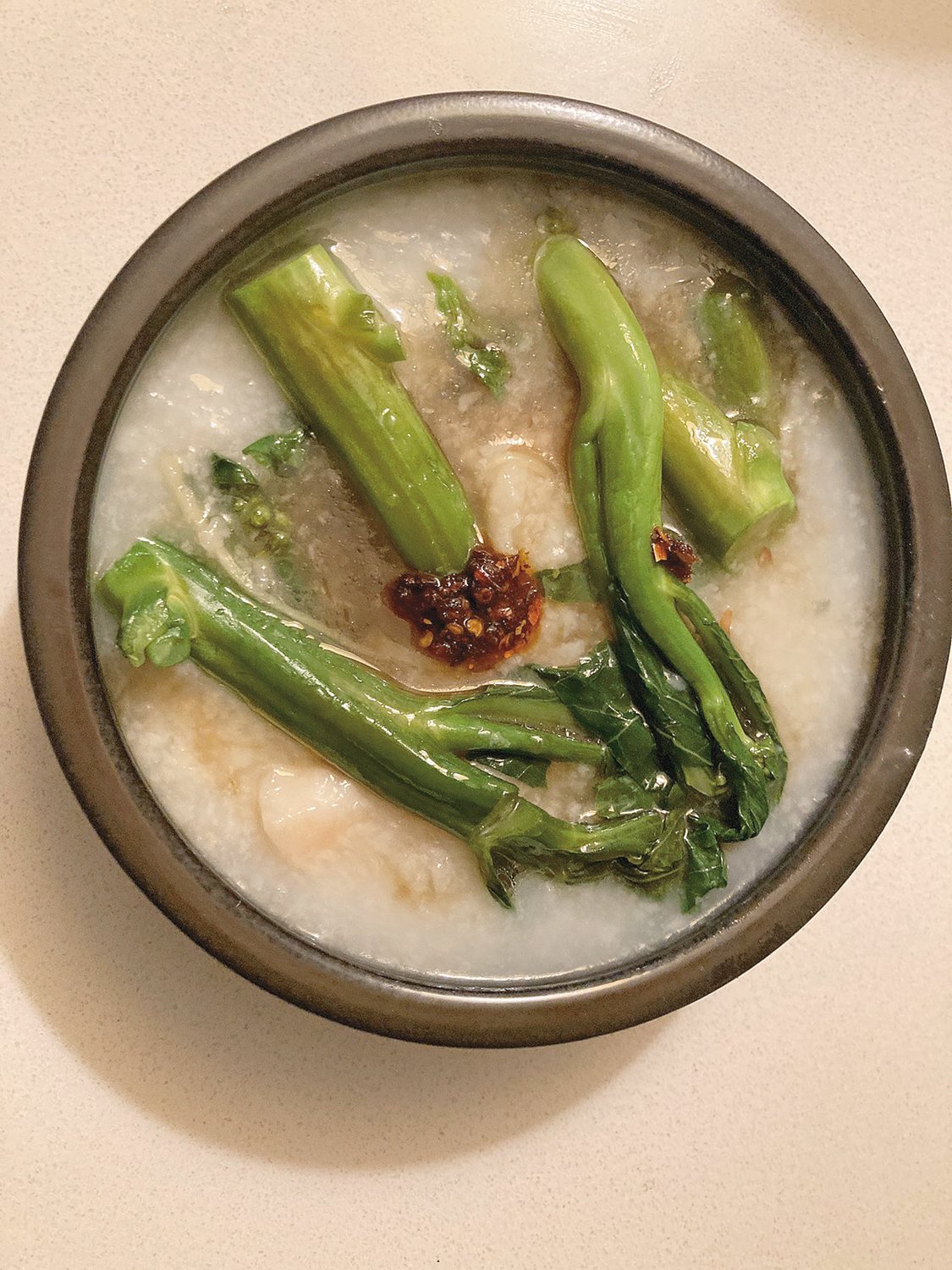 A cocktail of rain, wind and even a little snow assaulted the farmers market last week. The fair-weather hipsters stayed home. So did the lemonade stand. Altogether, more farmers showed up than customers, and coffee was the only thing that sold out because everyone’s hands were cold. There was a steaming cauldron of chicken congee for sale at the Vietnamese sandwich stall, and had the cardboard bowls not run out, the congee would probably have sold out, too.

I was lucky enough to nab a serving of that hearty and comforting porridge. It came garnished with cilantro and green onion, and I squirted on some hoisin sauce and began enjoying my morning, feeling immune to the weather.

Congee goes by various names in different languages anywhere rice is a staple. They translate into the likes of “white porridge,” “dilute rice” and “wet rice.” All of these definitions simmer down to the same basic idea: Cook a little rice in a lot of water until you have a thick, velvety white soup of disintegrated rice.

The Vietnamese sandwich seller, Le Ma, is of Chinese and Vietnamese ancestry. Where he comes from, congee is regarded as having especially nourishing and medicinal properties, akin to chicken soup in the West. “When you weren’t feeling well, that’s what people would make you,” he told me. “It’s easy to eat and easy to digest.”

It also doesn’t fill you up too much, he added. “You’re hungry a few hours later. It’s a good breakfast food because it gets you going. And it’s great also for a late night meal. It’s a light comfort food you can eat before bed.”

Although congee preparation is a simple and straightforward concept, there appears to be an endless array of ways that you can cook, garnish and serve it. It’s like the Zen concept of meditating on the same bowl of rice every morning until it becomes a different bowl of rice each morning, except mushier. And a lot more delicious.

In Bhutan, congee is used to celebrate the Blessed Rainy Day, a holiday that marks the start of the annual monsoon season. In Thailand, ultra-bland congee is often served alongside extra-flavorful side dishes that you add daintily to the congee, a process that my Thai friend described as combining “flavor” and “not flavor.”

Other times, it’s customized toward the end of cooking, like the congee that showed up in my mom’s hospital room last week in Denver.

She was recovering from an illness, and I’d stopped at a dim sum place for dumplings, her favorite, to bring to her room. I decided to order wonton soup as well because soup sounded like the kind of nourishment she needed. I showed up at the room and opened the container, only to realize it was full of congee with chunks of fish — they had messed up the order, but in a fortunate way.  The other flavors in this congee were ginger and green onion. It was pillowy, ethereal in texture and exquisite in flavor. Mom slurped it down. The next morning, I reheated it with leftover broccoli with oyster sauce, and it was once again perfect.

Two days later, I showed up at that brutal farmers market to find Ma’s Chicken Congee, garnished with cilantro and green onion from the neighboring stalls. To make it a bit more nutritious, he’d added quite a bit of quinoa. I must admit, I thought quinoa congee sounded a bit too crunchy, but Ma knew best. And the proof: My kids couldn’t stop eating it.

Good morning springtime. Good morning market. I look forward to quinoa congee year round, accentuated with whatever the seasons bring.

Rinse and drain the rice and the quinoa. Cook them together in a rice cooker. If you don’t have a rice cooker, use a pot with a tight-fitting lid and cook for an hour at a light simmer.

Meanwhile, sauté the chicken, celery, carrots and ginger with the salt and pepper. Add it to the congee pot and cook for an additional hour or so, until it’s a consistency that you like. Garnish with chopped cilantro and green onion, a squeeze of lime and a squirt of hoisin.