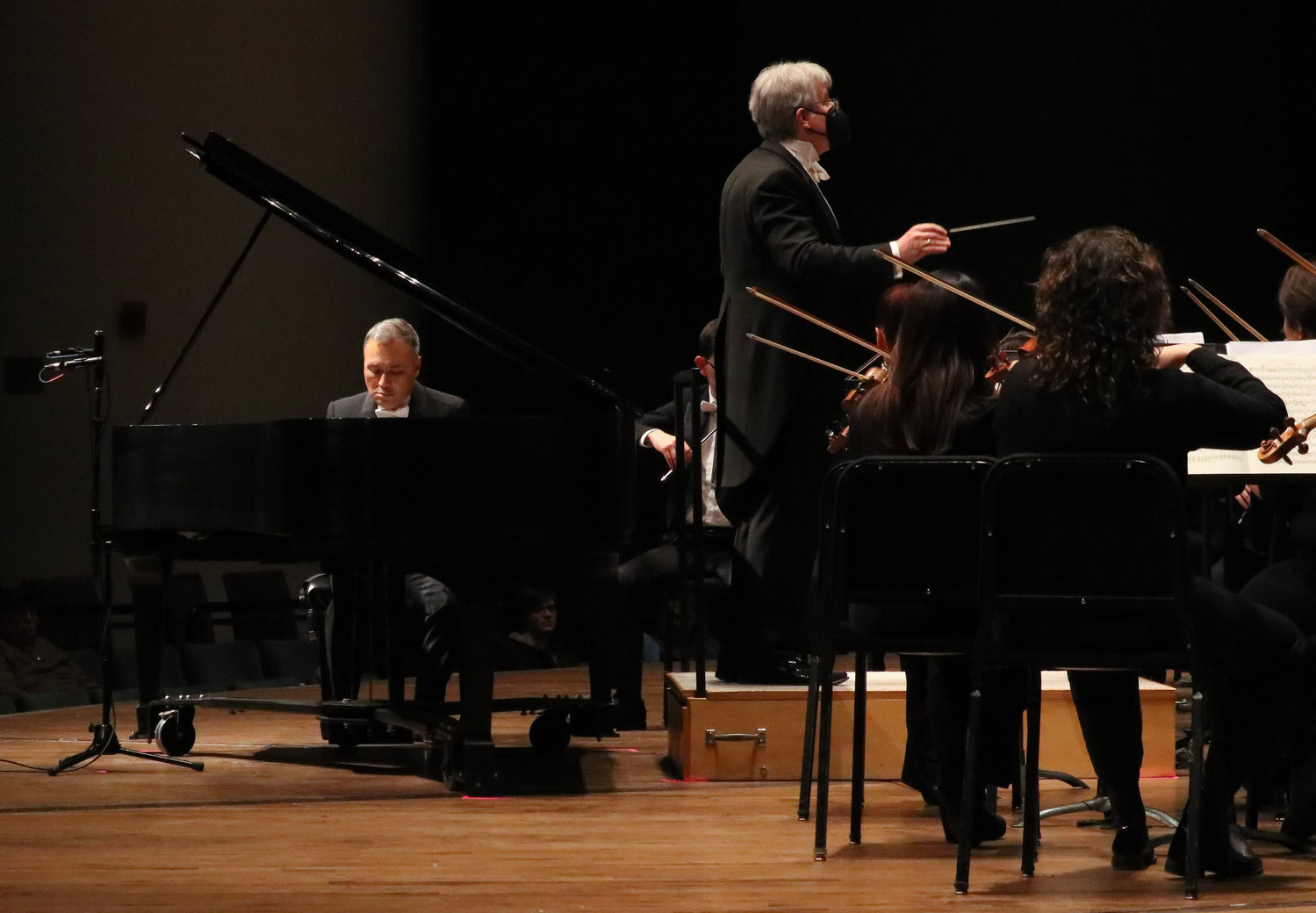 Guest pianist Jon Nakamatsu refrained from showboating and put all the oomph into the music at last week’s Lansing Symphony Orchestra concert.
Courtesy of Olivia Beebe
Posted Thursday, January 19, 2023 12:01 am

Note: This review is based on Thursday’s dress rehearsal. The concert took place Friday (Jan. 13).

Why are there piano concertos? One reason is to act out deliciously dramatic, borderline S&M scenarios, going by the Lansing Symphony Orchestra’s epic engagement with guest pianist Jon Nakamatsu last week. Early in the performance, Nakamatsu played an ascending series of intervals: “oh no, oh no, OH NO, OH NO,” accelerating and building to the dreaded (but not really dreaded), thunderous reply from the orchestra: “OH. YES.”

The interesting thing about Nakamatsu, a celebrated artist and winner of the 1997 Van Cliburn International Piano Competition, is the contrast between his apparent solidity — make that stolidity — on stage and the expressiveness of his playing. Close your eyes, and those gorgeous Brahms melodies surge and tumble in a headlong cataract. Open them, and all you see is a man at work, two shoulders hunched over the keyboard in the concentrated attitude of a jewel appraiser — no grand gestures, no ecstatic head swaying, no nothing. The oomph was all in the sound.

Nakamatsu and LSO maestro Timothy Muffitt are both big-picture artists. Despite the epic length of the concerto, they always came through with clear GPS coordinates.

There’s a surprising episode in the first movement where the piano and orchestra take the mighty melodies and chords from the beginning, shrink them down to palm-print size and lovingly pore over them as if cherishing distant memories. (Ah, those bygone times of a few minutes ago!)

Nakamatsu swept down like a bird of prey in the hyper-dramatic second movement, sending low-end bongs reverberating all the way to Okemos. In a triple-goosebump moment, the orchestra seemed to be riding the grand, melodic waves to a climax when a brand-new melody suddenly surged upward from the string section like an up-thrusting mountain range.

Then Nakamatsu and the orchestra changed roles, generating a musical moment that is impossible to convey with words. Well, OK, I’ll try: Something cosmic seemed to take place, like reversing the polarity of the Earth’s magnetic field, when the orchestra took up the urgent opening theme formerly stated by the piano, and Nakamatsu banged out a neutron-star-heavy reply, riveting a great circle shut. There is no escape!

The furious perfection of the second movement is a hard act to follow, but the profound tranquility of the third movement was a welcome balm. Nakamatsu took his time, massaging maximum resonance from every note, and the heartfelt, candle-dark tones of principal cellist Jinhyun Kim infused the entire movement with deep humanity, whether she was soloing or delicately shadowing Nakamatsu’s ruminations.

And now for a morsel of heresy: is that last movement really necessary? Everything that needed saying had really been said, but it’s churlish to refuse dessert. It was nice to have a moment to sit back, unclench your sphincter and enjoy hearing Nakamatsu and the orchestra finish each other’s phrases like an old married couple chatting over pastry and cream.

The perfect table-setter for the Brahms piece was a brisk and bustling symphony by distinguished American composer Adolphus Cunningham Hailstork III, who earned his doctorate in music at Michigan State University under legendary professor H. Owen Reed.

Hailstork has declared himself to be a lonely proponent of tuneful, enjoyable music. In interviews, he describes himself as a “blue-collar composer,” the man who ran away from the circus of modernist trends that have alienated many listeners. He’s not so lonely anymore, as younger composers embrace poly-stylistic palettes and melodies, but the LSO made a strong case for him as a pioneer of salt-and-pepper post-modernism.

Hailstork’s First Symphony has a strong narrative arc, told in compact-yet-comprehensive musical language. Bang! Surging chords wriggled out of the box like puppies, stepping on each other from an excess of energy. Sure, Hailstork can write a tune, but he’s got some cutting-edge tools in his garage. The first movement chopped away with a bold edge, skirting dissonance and going Art Deco on us with its colliding and intersecting wedges of color and texture. It could have lapsed quickly into a chaotic jumble, but the section work in the orchestra was so crisp and precise that you could delight in the painless knife edge at every unexpected cutoff.

In the tender second movement, the orchestra proved its mastery of the opposite skill — the fine art of diffusion. Strings and woodwinds painted the air with noble, reflective melodies in semi-opaque watercolors.  The third movement brought back the cavorting puppies, yet even here, the music was freighted with a looming excess of energy. The illusory threat that things are about to get out of hand is a specialty for Muffitt, who sometimes puts on his crash helmet and veers, banks and swerves just enough to for you consider reaching for the paper bag. Of course, he righted the plane in the end. In a few quick minutes, the finale delivered on every hint, promise and implied obligation in the first three sections, freshening the tiresome wrapping-up ritual with mercifully quick and effective flourishes.