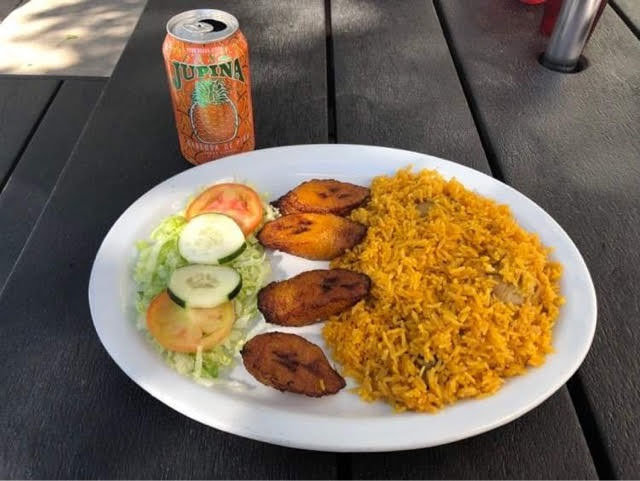 After an afternoon of hiking around looking for mushrooms and swimming at Hawk Island, the appetite demands something hearty and well-rounded. Post-exertion ravenousness speaks to how much context can shape your experience of food, and this point was underscored further during the course of the meal I enjoyed at La Cocina Cubana, downtown on the corner of Washington Square and Allegan Street.

As we worked through our plentiful, colorful plates at an outdoor table, my dining companion and I watched a man locked out of his second-story Washington Square apartment gain entry via ladder, his dog also watching from the bed of his nearby truck, while Lansing notable Deacon Earl performed to a small crowd about a block down. Dinner and a show, really. The best part was when the man decided to give his windows a wash — you know, since he was up there anyways.

It would be difficult to not enjoy your meal while in the midst of such “Pure Lansing” goings-on.

The bread definitely lived up to the circus, though.

Enjoying any dish, for me, is really about discovering all of the different ways you can combine the different elements in one forkful to yield maximum deliciousness and balance. “Constructing bites,” a friend of mine has called it. I like when I’m given a lot of building blocks to play with, and my selection did not disappoint.

From the menu’s varied and tempting offerings, I chose the Latin American classic Arroz con Pollo (chicken with yellow rice), which came with fried sweet plantains and a small salad. The abundant al dente rice, brilliantly colored by saffron and smelling of bay leaf and adobo seasoning, obscured a juicy thigh and drumstick, proving once again that dark meat is superior in most instances.

The small iceberg, tomato and cucumber salad I was ready to write off as an afterthought garnish until I tasted the light, tangy vinaigrette it was dressed in, another note to incorporate in the tasty permutations of flavors this meal affords.

The plantains, though. They really stole the scene. Plantains are the big, brawny, starchy cousin of bananas; when unripe, you’ve got a green plantain, when ripe, sweet. The large pieces of delectable fruit-meat (and I use this word because they’re so satisfying you could lose and not miss the chicken), are fried until the sugars on the exterior are perfectly caramelized to form a delicate, almost creme-brulee-like crust. The texture within is dense and luscious; when mashed into a forkful of rice and topped with a perfectly acidic tomato, you’ve got the perfect bite.

Washed down with Jupina, a not-too-sweet pineapple soda, and paired with friendly, prompt service, it was a meal and overall experience that left a lingering sense of contentedness, as well as enough leftovers for a small, second meal (or, in my case, a later-that-evening snack).