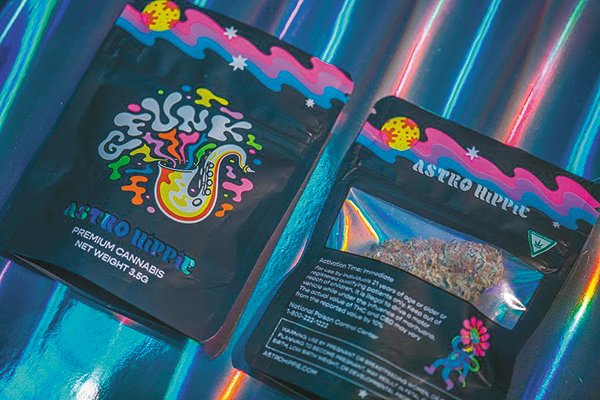 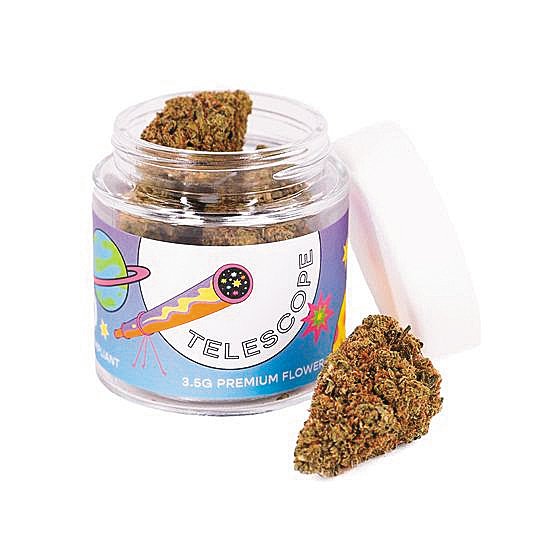 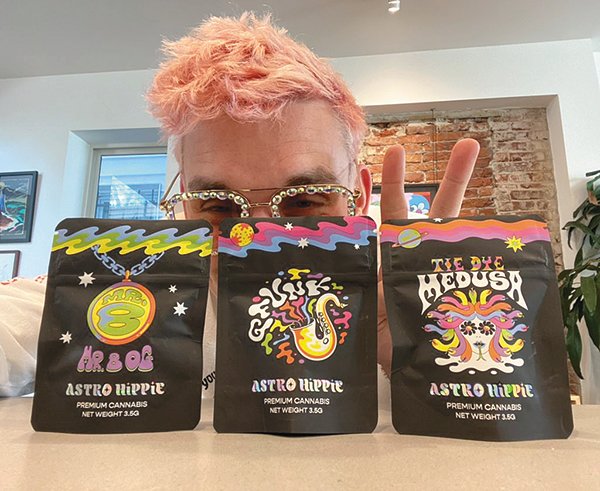 Just in time for the arrival of thousands of college-aged customers at Michigan State University, Grant Richard Kwiecinski, better known as GRiZ, has rolled out a dank lineup of two new premium cannabis lines that are now available in Michigan: Astro Hippie and Telescope.

The multi-instrumentalist electronic music superstar, producer and lifelong stoner from northern Detroit spent his formative years at Michigan State University before permanently abandoning the classroom for the dance floor. And on Saturday evening, he made his way back to East Lansing for a launch party and pop-up concert at Pure Options on Clippert Street to celebrate the official launch of his cannabis brand in Michigan.

GRiZ even helped out with the budtending for a few hours. And of course, I got samples.

The Astro Hippie lineup was developed by GRiZ specifically for its “funky, out-of-this-world flavor profiles” and includes three distinct strains: G Funk, Mr. B OG and Tie Dye Medusa. All three are hybrid blends grown through an exclusive partnership with Pure Options that boast some of the most potent THC levels available on the state’s recreational market.

And with a price tag of $55 for 3.5g, it’s also some of the most expensive pot in Lansing.

The G Funk — my favorite of the new GRiZ lineup — tested at a mind-boggling 32% THC.

These incredibly dense buds were coated with a thick, dusty layer of white trichomes and packed a real cerebral punch. A bouquet of flowery, fruity aromas (and a touch of skunk) burst from the bag. Smoking it in a joint brought out some earthier, grassier flavor profiles.

I couldn’t help noticing similarities between the G Funk and Pure Options’ “Rainbow Belts” phenotype, which has long been one of my favorite strains in Greater Lansing.

As a former drug dealer himself, GRiZ bills the Astro Hippie brand as a “love letter to weed culture” that is geared toward experimenters and tokers who want to “explore life in maximum color” while listening to “music that tickles their ears and blows their minds.”

Growing up in Southfield selling weed while waiting on tables, GRiZ has been proudly getting blazed long before his music career took off and has remained an outspoken cannabis advocate, even after rising from playing small clubs to selling out amphitheaters.

In pursuit of the full Astro Hippie experience on Saturday evening, I smoked two joints back to back while blasting GRiZ’s latest dubstep album “Rainbow Brain.” And I couldn’t think of a more fitting description: That euphoric, giddy sort of high lasted for about three hours before I zoned out into an episode of “Outer Banks” and then crashed on the couch.

Telescope, on the other hand, is a brand developed for those — in GRiZ’s own words — who want “to participate and benefit from this plant without getting on a rocket ship.” The lineup includes three delectable flavors of hemp flower as well as a few different varieties of CBD gummies and tinctures with less than 0.3% THC. Think of it like decaf marijuana.

The Cosmic Candy strain, for example, looks, feels, smells and tastes just like pot and also reportedly helps customers with pain, inflammation and anxiety. I smoked a big tease of a pre-rolled joint on Sunday morning and felt absolutely no psychoactive effects.

Other CBD strains include Milky Way and Astronaut Ice Cream, which still include a total cannabinoid profile of nearly 24%. The sunset sorbet gummies were incredibly flavorful.

I’ve talked plenty of shit about low-grade distillate products in this column. Often made with the cheapest trimmings and shake on the market, they’ve been known to produce a short-lasting and sterile sort of high that lacks the synergistic cerebral effects of terpenes.

When I came across a distillate-focused company called “The Clear” at a vendor tent at Pure Options on Saturday, I was naturally skeptical. But alas, I was proven wrong again.

The Colorado-based company launched a lineup of 1g vaporizer cartridges in Michigan last month that are totally free of filler agents, formulated with food-grade compounds from botanical sources and start at an uncommon potency of well over 85% cannabinoids.

At $55 each, they aren’t the cheapest vape cartridges on the market, but for those willing to shell out extra cash for purity, I’d recommend the Blue Raz variety, which was awarded with a first place recognition at the High Times’ cannabis cup in Michigan this year.