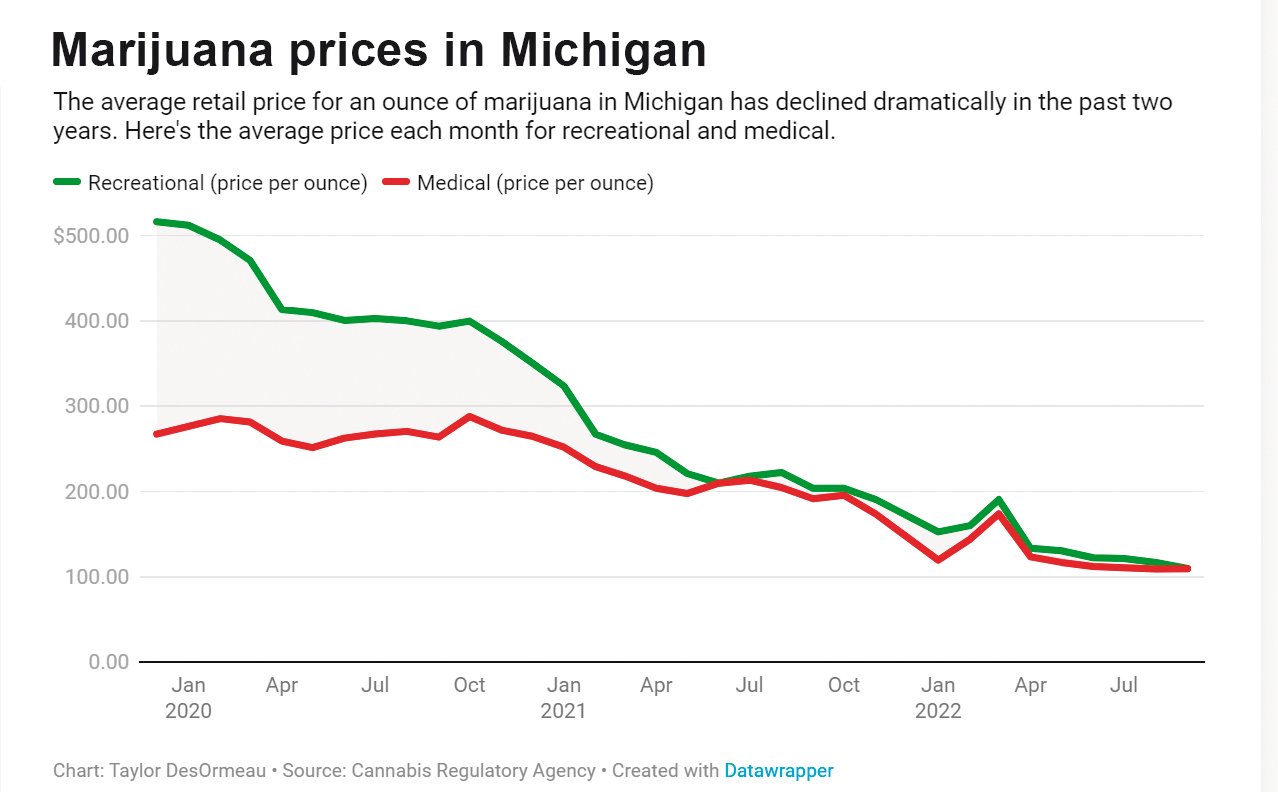 Prices for recreational and medical marijuana have declined in Michigan since January 2020.
Source: Cannabis Regulatory Agency 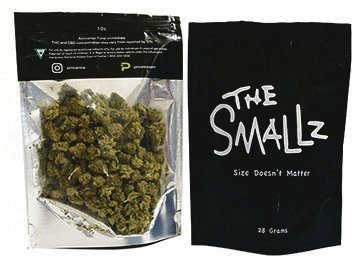 Times are tough out here. Quite an understatement, I know. The cost of groceries has skyrocketed 13% in the last year. Gas prices radically fluctuate daily. So, trying to pay bills can be an anxiety-fueled experience.

With these shaky trends, it’s surprising to hear that the cost of cannabis, especially cannabis flower sold per ounce, has astonishingly plummeted, and it’s all documented by the Cannabis Regulatory Agency (CRA) in its monthly reports.

This price dip has been caused by various factors, like big corporations with even bigger licenses pushing out warehouses full of plants that saturate the market. It has created much discourse about growing licenses, who should receive those licenses and the future of cannabis in Michigan. In the meantime, what does that mean for the consumers? You, dear reader, now have affordable, quality options across Greater Lansing. Balling on a budget has never been easier.

For a bit of background, ounces in Lansing, or ounces of cannabis pre-weighed and packaged at the facility they were produced at, run between $69 to $119 per ounce. Prepackaged ounces typically tend to be cheaper than cannabis that is served “deli-style” or when cannabis is weighed out during each individual transaction. They usually have “too small” buds to be sold in loose or bulk options. THC percentage depends on the strain, but there’s something for every level of stoner.

I perused local dispensary menus and gathered a list of which dispensaries have the cheapest, quality prepackaged ounces in Lansing.

Keep in mind that available strains change daily or on a “first come, first served” basis – check out Weedmaps or the dispensary’s website to see what’s available near you.

It’s no secret that Pure Options’ grow operation, Pro Gro, produces some incredible weed. This year, High Times named its Cherry Lime Runtz, a fruity indica strain created from crossing Cherry Lime Haze and Runtz, as one of the top adult-use strains in Michigan. Users of this strain report feeling a relaxed body high that left the mind focused and creative.

Ascend Wellness may be one of the newer dispensaries in the Lansing area, but they’re no stranger to having a variety of affordable prepackaged ounces. As I’m writing this, Ascend Wellness offers a dozen strains on its Simply Herb line. From gassy, sativa-dominant Lemon Bubba Temple OG (try saying that ten times fast) to sweet, indica-hybrid Wedding Crasher, it’s a diverse bag. I’m personally looking at Dosilato, an indica strain that’s produced when crossing Do-Si-Dos and Gelato 41, because of its rich lavender aroma.

Bazonzoes doesn’t have its own provisioning center or grow operation, but it does have some quality ounces. It carries a wide selection from Bay City-based company Rair Cannabis. Rair’s Mimosa, a fruit sativa-dominant hybrid strain, packs bright and happy daytime effects perfect for folks on the move. Users of this strain report it helping them with chronic depression, anxiety and ADHD symptoms. This could be due to citrus-forward terpene, limonene and its mood-boosting effects.