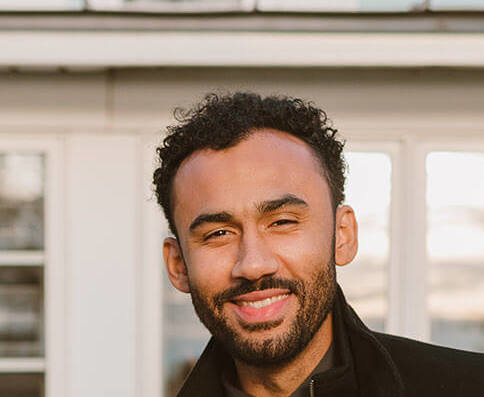 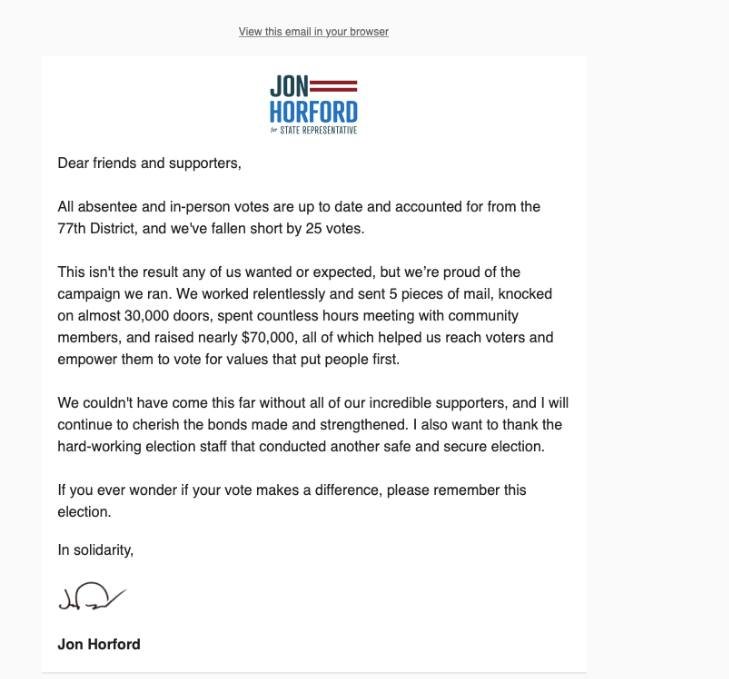 The letter Democratic candidate for the 77th House District sent to supporters on the evening of Aug. 3 conceding he had lost the primary by 25 votes.
Photo from Jon Horford's Facebook Page
Posted Friday, August 5, 2022 3:14 pm
Todd Heywood

FRIDAY, Aug. 5 — Jon Horford has conceded he lost the Democratic primary for the 77th House District.

“All absentee and in-person votes are up to date and accounted for from the 77th, and we’ve fallen short by 25 votes,” Horford wrote in a letter to supporters. The letter was sent by the 30-year-old former basketball player to his campaign email list. He also posted it on his Facebook page Wednesday evening.

The 77th House District includes downtown Lansing north to the city line, a large majority of Clinton County including DeWitt and the Grand Ledge area in Eaton County. Horford played basketball for Grand Ledge High School before heading off to the University of Michigan to play ball. He graduated from U of M with a bachelor’s degree and obtained master's degree from the University of Florida. He also played basketball professionally.

Going into the primary election Tuesday, Horford was the clear favorite of the Democratic Party establishment. He’d vacuumed up nearly all the endorsements in the race. He’d also raised nearly $70,000.

In his letter, Horford thanked supporters, noted the campaign had knocked on nearly 30,000 doors and sent five mailers to district voters.

“If you ever wonder if your vote makes a difference, please remember this election,” Horford wrote.

Dievendorf, a former director of Equality Michigan, has been an LGBTQ leader who identifies as bisexual and nonbinary, meaning not exclusively as a man or woman. She said that if she is elected in the November general election, she believes she will be the first nonbinary member of the Legislature.

She said she also identifies as a person living with disabilities, which she said are a traumatic brain injury and seizures.  The brain injury was related to an incident at the Capitol when a motorcyclist swerved into the area where she and others were painting "Black Lives Matter" on the street.

“Visibility isn't all about campaign literature,” she said in an interview this week. “It is about putting in the work over time, with your head down, just because it should be done. That lets people know who you are. This win is exciting, yes, but it is the extension of a movement that has been in the works and makes this win about all of us.”

With all votes counted, Dievendorf received 4,547 votes to 4,522 for Horford.

In November, she will face Republican  John Magoola of Lansing in a district that she said  leans 64% Democratic. He is unlikely to pose a threat to Dievendorf, given he has requested and received a campaign finance reporting waiver, according to the Michigan Secretary of State's Office. That means he cannot raise or spend more than $1,000.