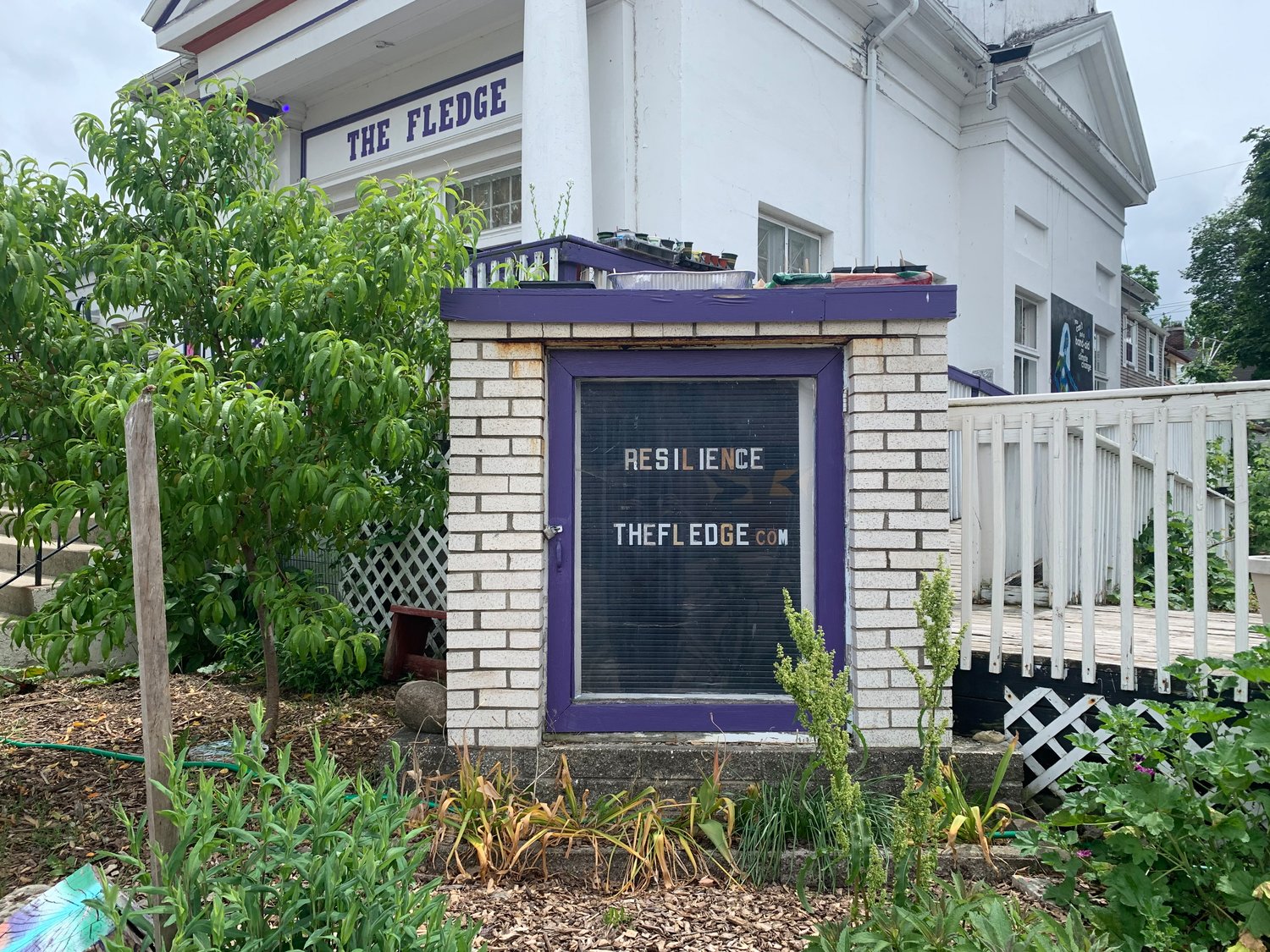 The Fledge is a large community space located on Eureka Street that offers a multitude of services and houses many different volunteer groups.
Cole Tunningley
Posted Tuesday, June 8, 2021 12:00 am
Cole Tunningley

Founder Jerry Norris started The Fledge with just $1200 and a dream. Since its inception, the organization has grown in size and scope. It provides free food, guideship for beginning entrepreneurs, cryptocurrency advice, a space to hold political rallies or a quiet room for local recovering addicts to meet up.

Housed in an old church building on Eureka Street, you can pass by The Fledge at any time on any day and see people from all walks of life.

“Our food security efforts have increased tenfold since the beginning of the pandemic,” said Norris. “We give away a lot of food now. Much more than before the pandemic.”

The Fledge changed course to adapt to the pandemic in more ways than one. Several rooms were converted to accommodate virtual appointments. Norris also plans to have artists from the community paint murals on the inside and outside of the building.

“At this point, I have an army of volunteers,” said Norris. “We’re working on so many new projects.” New people ask Norris if they can volunteer almost every day.

Coming up soon is an event for kids called Learn About Plants. Children who participate will learn planting, transplanting, tending to their gardens, composting and more.

“We love to see victory gardens in the community. The Eastside is the home for community gardens and urban farms in Lansing,” said Norris. “We want to see more of that. More people should be doing it — especially in underserved communities.”

Watching people come together during the pandemic warmed Norris’ heart. He saw how communities support each other when their governments won’t. The pandemic turned him into even more of an anarchist than he was before.

“There’s been a lot of harm and a lot of struggling,” said Norris. “The fact that we give out so much food is not a positive thing to me. It’s a negative indicator. So many people are struggling with mental health issues and poverty. Our city has a long way to go.”

Claire Powers found out about The Fledge two years ago when she was attending Unity Spiritual Center. Unity caught fire, so Norris walked over and offered to let them use The Fledge.

“When I was there, I saw how much The Fledge was doing for the community,” said Powers. “It's the place to go if you’d like to act in service of your community. And it's a place to go if you need support. From basic physical stuff to support in your recovery to help starting a small business.”

Volunteer Marshall Kelly — who uses they/them pronouns — said that The Fledge is everything to them. They have used The Fledge as a spot to record music for their band, Flower Trauma.

The space has been like a second home to them for years. They feel fully and truly accepted when they’re there.

“The Fledge is important to me because it has given me a space to be authentically myself, to create whatever I can think of,” said Kelly. “It has never shown me anything but love and how to work for what I want.”

Passion in Power — an organization that helps people reenter society after stints in prison — uses the Fledge as its base of operations. CEO Katy Kelly founded Passion in Power after her husband was released from prison. She saw that the criminal justice system in this country is broken.

“When I came to The Fledge in 2018, it was the lowest point of my life. My husband and I couldn’t see each other. We were both homeless,” said Kelly. “The Fledge was a safe place for us to be together as a family.”

Being around The Fledge and hearing people talk about their projects gave Kelly the confidence to bring her own idea to life. After months of research, Kelly applied for and received a grant from The Hatching, an organization that aids local entrepreneurs.

Kelly came to The Fledge at rock bottom. Now, she feels like she’s actually doing something with her life.

“I wake up and I’m there at 8 a.m. or 9 a.m. every day. I’m actually excited to wake up and come work on Passion in Power. It’s what I actually wanted to do,” said Kelly. “Without the Fledge, Power in Passion would never have been anything.”