Jackfruit of all flavors 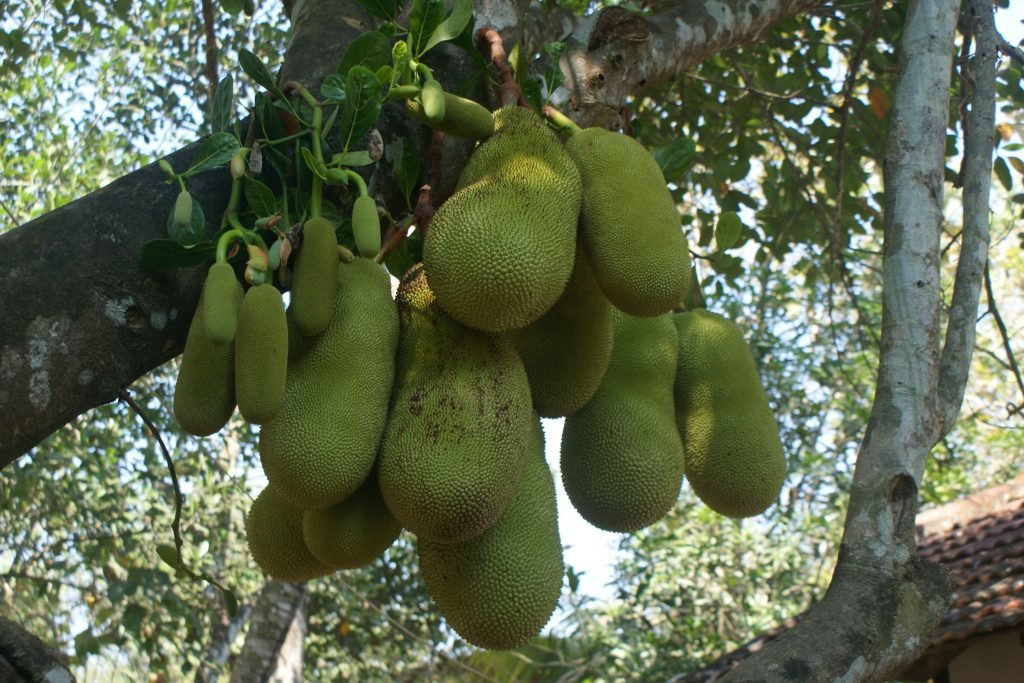 Jackfruit has become a prominent meat alternative — and the fruit itself can grow up to 100 pounds.
David Lowry
Posted Thursday, April 7, 2022 12:00 am
Ari LeVaux

Jackfruit has become a popular meat alternative in the last few years. You can find it on vegan tacos, or on a vegetarian “pulled pork” sandwich at a barbecue joint and at your local grocery store.

The trees are native to South Asia, and the fruit is used widely in sweet and savory dishes. The watermelon-shaped fruit can be three feet long and weigh 100 pounds, and is covered with spikes like a medieval weapon. A single tree can produce hundreds of fruits in a single year. When mature, the bright yellow flesh is sweet. Younger jackfruit flesh is firmer, closer to white in color and not sweet at all, tasting somewhere between palm heart and mushroom.

During my time in Brazil, I never tried eating young jackfruit. There, it’s more commonly eaten sweet and ripe. It tastes like extra-fruity bubblegum, with a sticky aroma you can smell a mile away. I was not impressed.

At an Asian grocery store in Salt Lake City the other day, my son snagged a can of jackfruit from the shelf, hoping for a sugary snack, and stuck it in the shopping cart. I didn’t notice until I got home, so I did what I had heard a lot of jackfruit chefs do, and prepared it with habanero huckleberry barbecue sauce. First, I simmered it in a cup of sauce and water until the liquid was reduced by half. Then, I marinated it for three days in the fridge.

I felt sheepish following this path, because I think dressing up “meaty” vegetables to pass as flesh is a set-up for failure. A serving of jackfruit contains less than three grams of protein — 6% of an average daily allowance. Our bodies can taste protein, and lack thereof. When we expect a meaty experience, a meaty texture alone won’t cut it.

Rather than serve my barbecue marinated jackfruit as a “pulled pork” sandwich, I spooned the stringy chunks onto some rice and ate it like some exotic curry. The mild jackfruit flavor mixed exquisitely with the flavors of the sauce. The texture of young jackfruit, as others have noted, is fun.

I had a little jackfruit left, so I fried it with some bacon bits, like the omnivore I am. It was glorious. The loose flesh of the fruit soaked up the grease, and the firm, chewy texture created a lovely contrast against the crispy pieces of bacon. I wanted more.

In small town Montana, where I live, I think I’d find jackfruit on the shelves. I hit the supermarket just in case and was pleasantly surprised. There was a bag of frozen ripe jackfruit pieces, but that wasn’t the pleasant part. I also found a package of “Bar-B-Que Jackfruit.” I brought it home to the lab.

The Bar-B-Que jackfruit was fine, if inferior to my own creation. I was ready for something different than pretend meat. In the jackfruit’s ancestral homelands, unripe jackfruit has long been used in savory dishes like curries. I was hoping to make an authentic jackfruit recipe, with spices tailored over many generations specifically for it, and for that I needed unflavored jackfruit. Happily, I found cans of young jackfruit at a small international foods market and brought some home. To celebrate, I invented a recipe for Indian-style jackfruit masala, a rich gravy with lots of aromatic spices. It doesn’t taste like fruit, and it doesn’t taste like meat. Nonetheless, I can’t stop eating it.

It’s not meat. It’s fried jackfruit in a fragrant tomato gravy. Serve it with rice, a green garnish, and spicy condiments.

1 15-oz can of young jackfruit in brine, drained and cut into pieces about an inch on a side

1 large tomato, diced, or a can of diced tomatoes — save the water in the can

Add the oil to the pan and heat it on medium-high heat until a flick of water sputters in the oil. Add the jackfruit pieces to the pan, evenly spaced so they aren’t touching each other and fry until browned, stirring as necessary.

Remove the browned jackfruit and potatoes and set aside. Lower the heat to medium. Add the garam masala and leave it long enough to almost brown, and then add the onions and stir into the spices. When the onions become translucent add the garlic and ginger. A minute later the tomatoes, including the water from the can, if possible. Stir it all together and add salt to taste. Add the browned jackfruit to the sauce and simmer for 30 minutes to thicken. Serve with fragrant rice like basmati or jasmine, garnished with chopped cilantro.