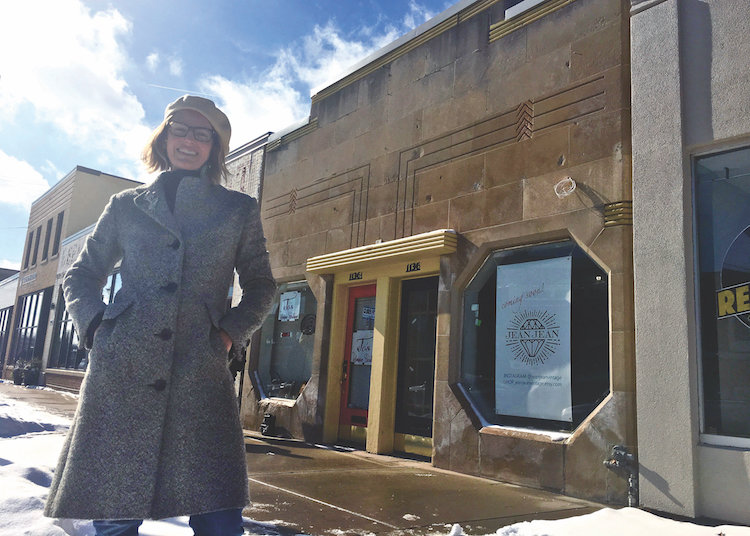 “Even though I’ve been running Jean Jean in Michigan for eight years, it feels like no one knows I’m here,” Duffelmeyer said. “That’s the downside of e-commerce – having no home creates a feeling of being untethered and disconnected from real life. The driving forces that got me looking around for a storefront were wanting to be a visible, active part of the small business community, and also needing a space to host clients coming from out of town.”

Duffelmeyer, who calls herself a curator, a shopkeeper and “a student of jewelry history,” focuses mainly on vintage, antique and original jewelry such as lockets, diamond studs and engagement rings. She also works closely with bench jewelers and gemologists, including Sundance Jewelers in East Lansing and Mark Arendsen in Lansing.

Duffelmeyer will oversee an approximate $100,000 renovation effort to her new space between now and April. She and her landlord, building owner Sam Nealy, are roughly splitting the cost to give the circa 1937 Art Deco building a complete overhaul, including new electricity, a new roof, new plumbing and a new heating/cooling system. The original terrazzo floor will be restored, and Duffelmeyer plans to add era-appropriate details whenever possible.

“It’s going to be an incredible space and I hope people love it,” she said. “I plan to be there for a very long time.”

Duffelmeyer started Jean Jean in 2010 after spending five years as a buyer and manager at Zingerman’s in Ann Arbor. She has a degree in archaeology, and said she was drawn to the vintage jewelry business because she thinks of them as artifacts.

“They’re markers of the past and they hold so much emotion,” she said. “They’re durable, they’re practical and the best designs are always fashion relevant. Also, I enjoy photography and jewelry is wonderful to photograph.”

Duffelmeyer is tight-lipped on where she finds her jewelry, but she said it’s “mostly buried treasure” she finds at private appointments and auctions.

“My inventory is small but mighty,” she said. “I’m very, very careful about what I buy. I am willing to do a bit of work – tighten a few prongs on a ring, replace a broken bail – but that’s about it. Most jewelry is already in excellent vintage and antique condition when it comes to me.”

In 2015, she launched a small collection of “memento mori” (mourning) jewelry, and the next year a larger range of Michigan-made charms and rings based on Victorian artifacts. She doesn’t do custom, or bespoke, pieces, but she said she enjoys helping with coordination, especially if the person wants an antique-style piece or is looking to re-purpose a special family heirloom.

“I have ideas about that, as well as loads of old catalogs and images to give people ideas,” she said. “I love talking through those things, but unless I can add value to the process, I just get out of the way and steer people toward the professionals. I try really hard to keep my focus on antiques. That is the space that I want to fill in this marketplace with Jean Jean.”

The business name comes from the nickname Duffelmeyer’s dad had for her when she was growing up; it’s a play off her middle name, Jean. He died just before she started her business, so she felt it was a fitting way to continue his legacy as she launched her own.

Duffelmeyer said that emotional reaction she gets from satisfied customers drives her. At home, she has dedicated an entire wall to photographs sent by her clients thanking her for her work.

“Engagement stories are always special but I think I’m most moved by people who use Jean Jean jewelry to reconnect with someone they loved and lost,” Duffelmeyer said. “Like the young woman who bought a ring because it reminded her of the one her grandmother wore. Another person found a locket through Jean Jean that had her friend’s initials on it. Those are the stories that move me.”

Recently, Duffelmeyer worked with a woman to coordinate the gold casting of her son’s baby tooth after the boy became terminally ill.

“She said she wanted something she could wear every day to remember him after he’s gone,” Duffelmeyer said. “It’s a very Victorian sentiment. She wrote me the most beautiful note when she received it. I had to pull my car over because I was crying so hard after I read it. Adornment is for fun and fashion, but it also a way for people to express themselves in joy and in sorrow.”