Jonathan Swan is all of us 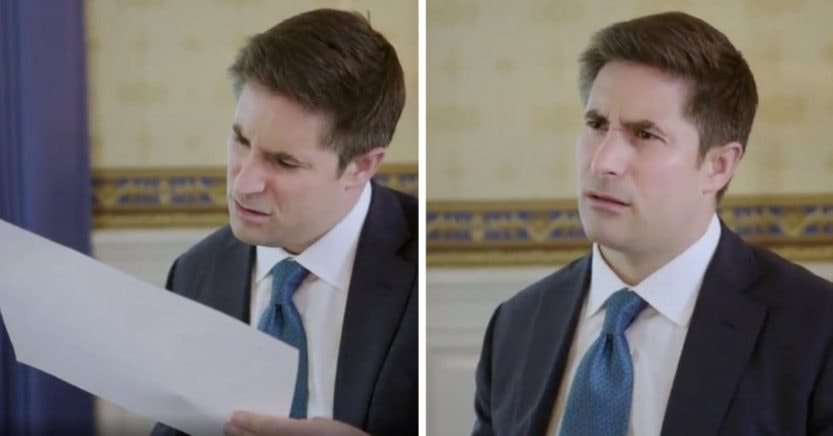 With good reason, much ink has been spilled about Donald Trump’s trainwreck interview with Axios’s Jonathan Swan. It offered plenty of easy targets for mockery: Trump’s horrifyingly tone-deaf remarks about John Lewis (“Nobody has done more for Black Americans than I have”); his absurd insistence that the number of COVID deaths didn’t matter (“It is what it is”) as much as the number of tests; his squirming, dissembling dismissal of intelligence showing that Russia had put bounties on American soldiers in Afghanistan (“That’s an issue many people said was fake news”); his casual equating of anarchists (a legal and legitimate ideology) and “agitators” (a word that calls to mind Bull Connor) with terrorists; his ongoing defense of accused child sex trafficker Ghislaine Maxwell (“I do wish her well”); his complaint that mail-in voting is “new” (Swan: “It’s been here since the Civil War”), to name a few.

As the internet soon discovered, the interview worked better with a laugh track.

And Swan’s stupefied visage when Trump doubled and tripled and quadrupled down on the idea that tests—not the number of hospitalizations or deaths—somehow proved that he was effectively handling COVID, all evidence to the contrary, quickly became a meme.

Swan’s was the face of a nation exasperated by a president consumed by his own bullshit.

Read this exchange, keeping in mind that the one who sounds like your syphilitic drunk uncle belligerently arguing with you at Thanksgiving dinner currently controls nuclear weapons, then try not to drown yourself in cheap booze.

Trump: Here is one. Well, right here, United States is lowest in numerous categories. We’re lower than the world.

Swan: Lower than the world?

Swan: What does that mean? In what? In what?

Trump: You can’t do that.

Swan: Why not as a proportion of population?

Trump: What it says is, when you have somebody where there’s a case-

Trump: The people that live from those cases.

Swan: Oh. It’s surely a relevant statistic to say, if the U.S. has X population and X percentage of death of that population versus South Korea-

Trump: No. Because you have to go by the cases.

Trump: You don’t know that.

Trump: You don’t know that.

Trump: I won’t get into that because I have a very good relationship with the country.

Trump: But you don’t know that. And they have spikes. Look, here’s one of-

Trump: You take the number of cases.

Swan: Last? I don’t know what we’re first in.

Trump: We have the best.

Trump: And we have cases because of the testing.

Swan: I mean, a thousand Americans die a day. But I understand. I understand on the cases, it’s different.

Trump: No, but you’re not reporting it correctly, Jonathan.

Trump: If you take a look at this other chart… look, this is our testing. I believe this is the testing. Yeah.

Swan: Yeah. We do more tests.

Trump: No, wait a minute. Well, don’t we get credit for that? And, because we do more tests, we have more cases. In other words, we test more. We have… now, take a look. The top one, that’s a good thing not a bad thing. But the top… Jonathan-

Trump: Well, they don’t even-

Swan: But they are all going up.

Trump: Well, you look at death.

Trump: Death is way down from where it was.

Trump: Death… excuse me. Where it was is much higher than where it is right now.

Swan: It went down and then it went up again.

Trump: It spiked, but now it’s going down again.

Trump: It’s gone down in Arizona. It’s going down in Florida.

This was the second recent interview Trump had spectacularly flunked, having been run over by Fox News’s Chris Wallace in mid-July. Swan wasn’t a particularly hostile interviewer. This wasn’t a grilling. I found him overly solicitous at times, in fact. But any interview that punctures Trump’s bullshit bubble even slightly is going to be revelatory and likely disastrous for the president.

This was both of those things—so much so that it quickly sent him into the loving and reassuring arms of Fox & Friends.

As I watched the Axios interview, I couldn’t help but think of the political scientist Daniel Drezner’s depiction of Trump as—from the title of his recent book—The Toddler-in-Chief. As Drezner explains in the introduction:

As it turns out, a lot of people with a rooting interest in Donald Trump’s agenda have described him as a very immature boy. One person described NATO’s preparations for Trump’s first attendance at a meeting of the alliance as “preparing to deal with a child—someone with a short attention span and mood who has no knowledge of NATO, no interest in in-depth policy issues, nothing.”

A Trump White House staffer characterized one dubious White House press release as an action designed solely to appease the President, “the equivalent of giving a sick, screaming baby whiskey instead of taking them to the doctor and actually solving the problem.”

In 2017 Trump’s Deputy Chief of Staff Katie Walsh described trying to identify Trump’s goals as “trying to figure out what a child wants.” In 2018, a senior GOP member of Congress told Trump supporter Erick Erickson, “I don’t know what the f*** he wants and in talking to him I’m pretty sure he doesn’t know what the f*** he wants. He just wants, like a kid who’s so hungry nothing sounds good anymore and he’s just pissed off.

In 2019, a person close to Trump’s legal team explained the perils of advising him: “There’s just no getting through to him, and you can kiss your plans for the day goodbye because you’re basically stuck looking after a 4-year-old now.” A US official described cajoling Trump to keep troops in Syria as “like feeding a baby its medicine in yogurt or applesauce.” …

[B]etween April 2017 and December 2019, I have recorded well over one thousand instances in which an ally or subordinate of Donald Trump has described the President as if he were a toddler. The rate is greater than one toddler depiction per day. That seems like a lot.

America has had awful presidents before. It’s had more than its share of knaves, drunks, paranoids, racists, patrician elitists, do-nothings, idiots, mediocrities, and sleazes, often in combination.

But in nearly 250 years, it’s never encountered anything like Donald Trump, a person so self-centered as to respond to a question about the legacy of civil rights legend who, at that moment, was lying in state at the Capitol with:

Trump: I don’t know John Lewis. He chose not to come to my inauguration.

It’s never had a president who would respond to a question about a pandemic that has killed more than 150,000 people in six months by changing the subject thusly:

Swan: But the question is, Mr. President, by June we knew things were bad. And the last time I was with you was the day before your Tulsa rally in the Oval, and you were saying big, huge crowd, it was endorsed. These people, they listen to you.

Swan: Why would you want that?

Trump: Because they had 120 Black Lives Matter people there and Tulsa-

Swan: I understand but why would you have wanted a huge crowd?

We had a tremendous crowd, we had tremendous response. It was like an armed camp. You couldn’t even get through. You couldn’t get anybody in. But we had 12,000 people. It was incorrectly reported. The other thing we had that nobody wants to talk about, so Fox broadcast it. It was the highest rating in the history of Fox television Saturday night. It was the highest rating.

It’s never had a leader who is so historically illiterate and delusionally narcissistic that he would say out loud:

Trump: I did more for the Black community than anybody with the possible exception of Abraham Lincoln, whether you like it or not. People say, “Oh, that’s interesting.”

Swan: You really believe you did more than Lyndon Johnson who passed the Civil Rights Act?

Trump: I think I did, yeah.

(Aside from the sheer lunacy of equating his modest criminal justice reform and the economic growth he inherited with the Civil Rights Act—not to mention the Voting Rights Act—Trump has obviously never heard of Ulysses S. Grant.)

And it’s never found itself led by a man who sounds like he skimmed the Cliff’s Notes 15 minutes before the book report was due:

Swan: Why would you have a test?

Trump: There was no test for this-

There are 88 days until the election. Early and absentee voting will begin in earnest in two months. Joe Biden is still cruising, up somewhere around eight points, the only drama in his camp emanating from the seemingly interminable search for a vice-presidential nominee, which—let’s be honest—began and will probably end with Kamala Harris.

Biden’s campaign might be the most low-key in modern history. On paper, he might have the most progressive platform since FDR, but he’s not running as a revolutionary. He’s staying out of the way. He wants the election to be a referendum, not a choice.

Biden’s strategy, then, is to keep giving Trump rope and invite him to hang himself.

Without necessarily trying to, Jonathan Swan did much the same thing in a different way.

Pin Trump down on what should be simple details, and he gets impossibly flustered, unable to deviate from the singular track in his mind. Allow him to talk and you expose the vacuum between his ears. Ask him questions and his self-obsession becomes unavoidable.

I’m not qualified to assess whether these traits better reflect childishness or senility, but I’m certain they don’t indicate a stable, well-adjusted septuagenarian suited to the pressures of one of the most important and stressful jobs on the planet.

I watched clips from this interview and read the transcript probably dozens of times over the last few days, increasingly dumbfounded.

In 2016, it was obvious—to me, anyway—that Trump was a disaster in the making, that it was only a matter of time before his ineptitude and rank incompetence caught up to him. But that was speculation, I suppose; to vote for Trump was to take a chance on an unknown during a period of relative peace and growth. It was a gamble, a risk.

Four years later, there’s no more speculation. The evidence is here, and it is undeniable. By nearly every metric, Trump’s administration has been a failure.

And yet, in 88 days, well over 60 million people will vote to re-elect this man despite his patent narcissism and lack of intellectual curiosity.

Some will tell themselves they’re doing it for the judges or the Second Amendment or because they hate abortion or because Joe Biden is Karl Marx. Others will pretend that only Trump can fix the economy that he broke. And—whether they admit it or not—many will do so simply because Trump appeals to their racial and cultural grievances and/or they want to own the libs.

That’s what I see when I look at the picture of Swan, staring in WTF? incomprehension at Donald Trump: How the hell did we end up here?

Jonathan Swan is all of us.