Flash in the Pan: Kale chips 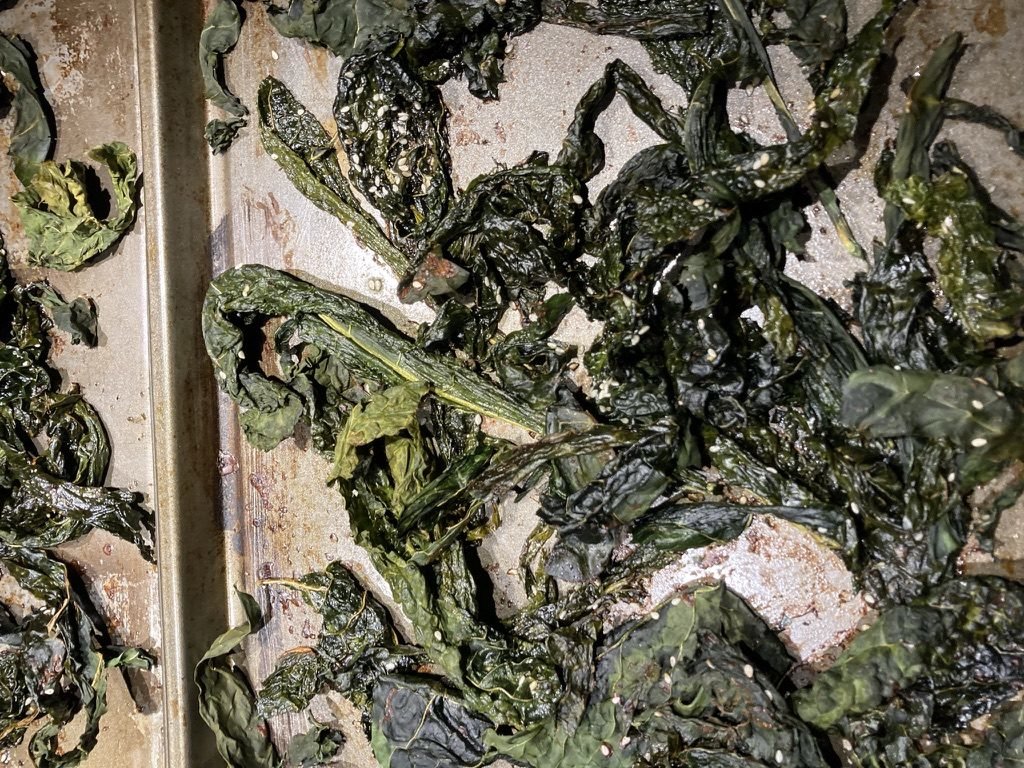 “I don’t usually like it,” observed my son Remy, who is the chef of the family. “But in this form I do.”

When Ella realized to which snack we were referring, she lurched toward me like a starving zombie. “You have kale chips,” she stated in a firm monotone that was both question and statement. The rest of the gang joined in pursuit of the fresh batch of kale chips I’d made for their lunches.

Perhaps someday in the future, food technologists will have the tools to solve the deep, mysterious alchemy of kale chips. Even today, our crude brains can at least comprehend that grease, salt and crispiness will all make food taste better. As for what exactly happens to that part of kale’s flavor that some find harsh, we will leave that to the next generation to figure out.

Wherever it goes, it’s gone. As was a large bunch of curly kale’s-worth of chips, which the children devoured in minutes, after which chaos was restored.

Being foliage rich in chlorophyll, minerals and other nutrients, kale is one of the world’s healthiest foods. When you factor in the inordinate amount of fiber that kale packs, it’s like dark, green leafy steroids for your body, without the actual steroids. Eat them in their crunchy glory. Crumble them onto salad. Nobody will grumble at those million crunchy, greasy, salty, delicious fibers.

These are perfect for when it’s time to feed the monsters you’ve created. The base of the recipe is kale, salt and oil. I’ve added a few extra spices, seeds and flavorings to this recipe as but one example of a near-infinite variety of combinations you can try. Whatever bakes your chip.

Strip the kale leaves from the stems, rip them to pieces and submerge the resulting shards of kale into a large bowl of water. Massage the kale in the water and then transfer to a colander or salad spinner to dry.

Preheat the oven to 275 degrees.

When the kale has mostly dried, put it in a mixing bowl and add the rest of the ingredients. Work it with your hands to distribute the flavorings, and then spread the seasoned kale on two baking sheets in a single layer with some space around each leaf so none touch. This allows for air circulation, which is crucial for even drying.

Place the trays of seasoned kale leaves in the preheated oven, and bake for about 15 minutes. At this point the leaves will have begun to shrink and crisp. Give them a stir to facilitate the crisping. You don’t have to worry about the leaves touching at this point. Just try to spread them all out as evenly as possible.

When they are dried but perhaps not totally crispy, turn the oven off and let the kale chips cool down with the oven. When the oven is still warm but almost cool, remove the kale chips and transfer them immediately to a tightly sealed plastic bag, before they have a chance to absorb any moisture from the air. Put these bags in lunches, picnics, or your choice of snack times.