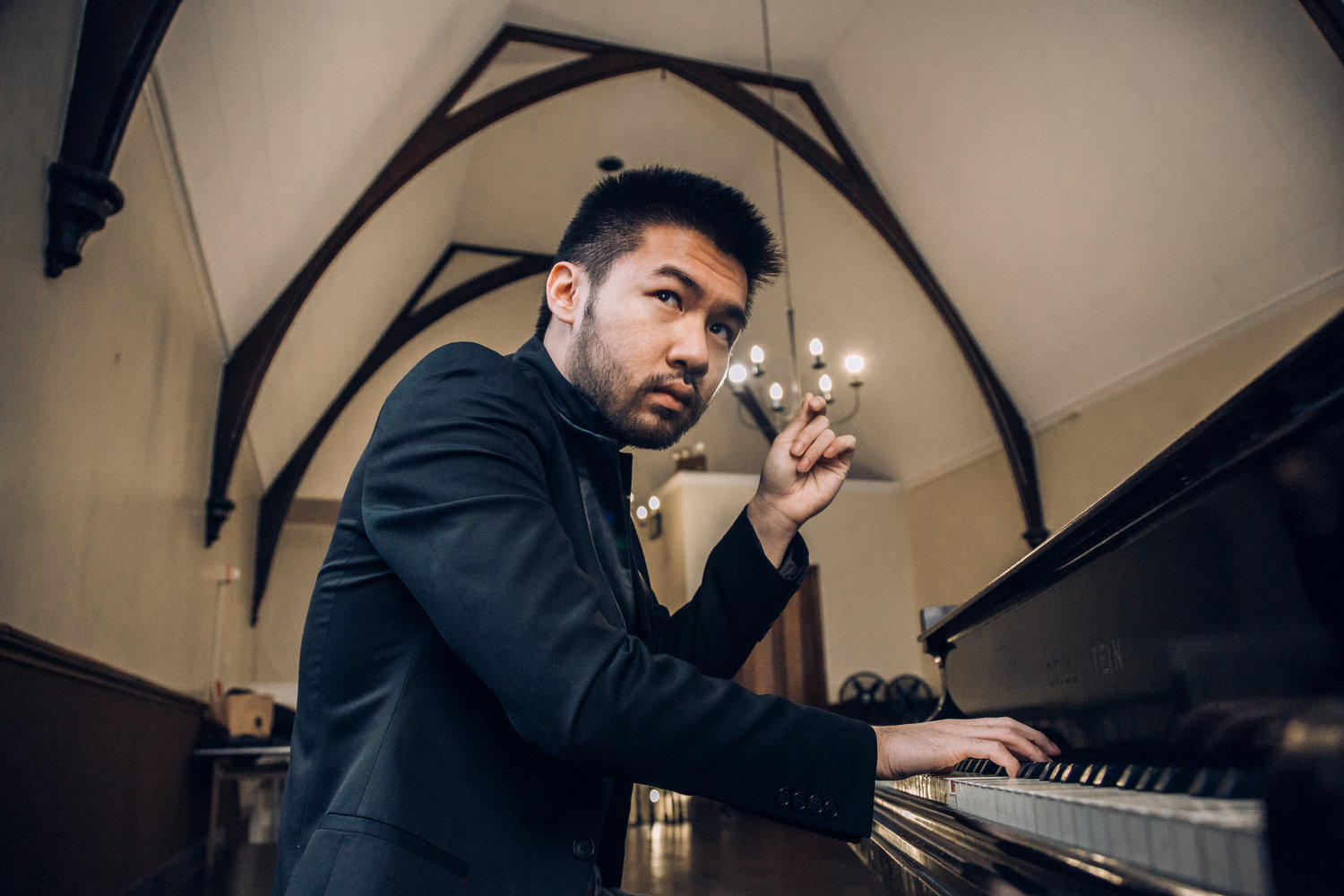 Pianist and composer Conrad Tao is unique in the distinguished annals of Lansing Symphony soloists. At 27, he’s played all over the world.
Posted Thursday, March 24, 2022 12:00 am
Lawrence Cosentino

Would you care for a Suite Français, sir? The sweet and tart dessert came before the main courses at last week’s Lansing Symphony Orchestra concert.  A subunit of wind and brass players formed a semicircle at the front of the stage, with a harpsichord and drums in the middle, and floated through a witty, piquant suite that fused glassy modern harmonies with bumpy medieval rusticity, setting the stage for a remarkable night of masterworks from the classical era.

It was not a corker, a rouser or a tear-jerker of a concert. The evening’s two major works by Haydn and Mozart call for unrelenting attention to detail, exquisite balance, and a watchmaker’s precision, just to reach the level of “OK but boring.” To fly over the top, and transport the audience to a place of pure, floating, satisfaction, the musicians had to summon up a clenched intensity, a scalding flow of magma held barely under the surface, and they did just that, from first note to last. (Note: this review is based on Friday night’s final dress rehearsal, owing to the reviewer’s continuing COVID caution.)

When a lot of orchestras and chamber groups have a “classical” night, they find it irresistible to stampede straight to the Mozart. Lansing is fortunate that maestro Timothy Muffitt, an avowed Franz Joseph Haydn fanatic, is so keen to share the musical innovations and endlessly satisfying felicities of the classical era’s foundational mind. Maybe the problem is that Haydn is often played in a boring way, but Muffitt loves him almost to the point of indecency, and infuses every second of his music with an infectious joy.

After the usual orchestral throat clearings and stentorian calls to order, the orchestra took a series of deep collective breaths and lightly bounced into Haydn’s Symphony No. 90. Melodies scampered up and down and back up again with a supple exuberance and athleticism that permeated the whole performance.

The second movement was a sublime study in discipline and decorum, settling into a long, steady stride that kept perfect balance without dragging. The dominance of the strings gave the sound a leathery, dark texture perfectly suited to show off finely wrought loops of embroidery from the woodwinds.

With a grandiose swell, the waltzing third movement promised an interval of pompous bombast, but Haydn is a man of surprises. The blasts functioned more like dynamite in a strip mine, revealing broad, criss-crossing strata of melodies and counter-melodies. The finale was an insane steeplechase, played at breakneck pace, but it held onto its thin veneer of civilization, like a grand duchess on a runaway post chaise.

When the Mozart did come, it muscled in with a vengeance. Pianist and composer Conrad Tao is unique in the distinguished annals of Lansing Symphony soloists. At 27, he’s played all over the world, with the greatest orchestras, and composed a growing body of passionate, vital new music, often for top orchestras like the New York Philharmonic. In person, he is a hot filament of music. Not only did Tao give a passionate, crystalline performance on the keyboard, he conducted the orchestra at the same time.

A moist atmosphere of delicious doom permeated the opening bars. Tao was all springy energy as he conducted the orchestral opening and half-sat down to play his opening gambit on the keyboard, giving his all to the piano part when needed, deploying his left arm to conduct if the right was otherwise engaged.

Tao is an artist of such prodigious capacity, emotional expression and technical mastery you got the feeling he might have been doing nine other concerts, with his mind alone, while he was performing in Lansing.

Not that he ever seemed detached. Tao’s energy pulls every invisible string around him taut as piano wire, including the strings to your mind and ears, until pianist, musicians and listeners are bound up in an invisible web of mutual experience.

His improvised solo cadenza Friday night pulled Mozart by the scruff of his wig into one particular night in spring 2022, boiling every major element of the first movement into a spontaneous microcosm — first pent-up fury, then desolate longing, and, finally, a headlong dive back into the fray.

The second movement pivoted from murk to simplicity, centering on a hymn-like melody that glowed like a candle in Tao’s hands.  The third movement introduced a new peril: perfection paralysis. Every phrase, every nuance, was so exquisitely wrought it was difficult to take it all in. Fortunately, Tao understood, as Mozart did, that contrast is the salt of life and art. By now, he and the orchestra were one, like a dragon is one with its tongue, showing its iridescent scales one moment, rolling over to expose its grumbling, ominous underbelly the next. The musicians clearly relished working with a soloist, conductor and musical mind of Tao’s caliber, and matched him note for note in precision and exuberance.