‘A farmers market no more’ 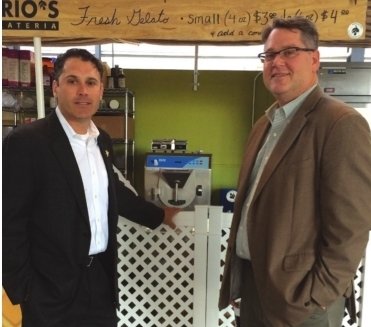 Posted Wednesday, June 17, 2015 12:00 am
Brooke Kansier
It may still be called the City Market, but farmers will no longer be driving its identity under a new plan being shaped by city officials.

“People still identify it as a farmers market, but really, the elements inside have changed,” said Scott Keith, president and CEO of the Lansing Entertainment and Public Facilities Authority, which runs the market.

“It’s not a farmers market anymore,” Keith said. “We have elements of that, but that’s not its core.”

Keith called what’s coming an “urban market,” with more emphasis on eateries, prepared foods, specialty food stands and possibly a brewpub to complement the already successful Waterfront Bar & Grill. Some, like the ever popular Hills Home-Cured Cheese and the new Iorio’s Gelateria will stay. It will also feature more eateries along the lines of already established Red’s Smokehouse and For Crepe Sake.

The concept is a work in progress now, but Keith said market patrons should see a full transformation within the next two or three years. He cited similar, successful markets in cities like Grand Rapids as models for the transformation.

When it was founded in 1909, the City Market had a niche as Lansing’s only farmers market. Now, over 20 Michigan Farmers Market Association-recognized markets call the Greater Lansing area their home. Only 11 vendors occupy the City Market, according to Keith. When the market reopened at its current location in 2010, nearly 40 vendors packed the space. There was talk of adding a second story to the pole barn on the Grand River that replaced the 1938 market nearby. It was torn down to make room for the colorful apartment complex MarketPlace.

While the idea of an urban market has been in planning for some time now, Pine said a public survey held this winter reinforced the idea.

“It’s not as much what we’re looking for, as much as it is what the demand is asking for,” he said.

As new apartment buildings spring up and more restaurants make their Lansing debut, the market has to change with the city, Keith said. He believes an urban market will appeal to the city’s growing younger crowd.

Pine said as river revitalization efforts increase, the market’s riverfront venue gives it a big advantage. In July, the market will host a meeting of Friends of the River Trail, a nonprofit organization that works to improve and maintain the city’s River Trail and other riverfront areas.

“We have to define success in a lot of different ways I’s not just economical, it’s about helping this community be a place that people want to live in, and a place people can enjoy,” Pine said.

The City Market is home to Lansing’s only restaurant on the water, the Waterfront Bar & Grill. Last summer, the market began offering kayak and canoe rentals.

“When I met with those guys and they pitched this idea, nobody was ever on the river,” Keith said. “And now, there have been Saturdays that they’re sold out of kayaks.”

He said the biggest obstacle right now is filling the market with merchants that fit the urban market concept. Keith hopes to eventually see a baker and a butcher at the market, among other groups.

“That way, we can really get the right stuff in there that people want to come to,” Keith said. “Do I think some will leave with that change? Probably, because a farmers market offering is a little bit different.”

“I just think that if they bring new vendors in, they have to be careful not to duplicate a lot of stuff,” she said. “If you duplicate stuff, it kills you.”

When Mama C’s made their debut three months ago, Davis said she faced resistance from other vendors.

“The first two weeks we were here, it was a bad note,” Davis said. “In a way, we were looked upon as a threat, because we’re going to take some of the money — but [they’re] not thinking about the fact that we’re going to bring people in.”

Along with vendors, LEPFA is also looking for a new market manager, to replace previous manager Lori Mellentine.

Those fond of the old market will get a bone: The market plans to hold an outdoor farmers market on Tuesdays, partly in honor of the landmark’s history.

“One of the things we’re challenged with is that there’s a large core of people in this community that know that history of the City Market, that harken back to the days when they might’ve went to the market with their parents,” Pine said. “So, we have to be good stewards of that history, but we also have to understand that that customer has changed.”

Diane Thompson, who formerly chaired the Friends of the City Market, a group that advocated for the market before its 2010 move, said that she misses the old market, but she is glad that LEPFA is working to improve the newer venue. She said that a farmers market would be difficult to sustain in the new location due to limits with size and access.

“I certainly think that it’s great to look at what might work, you know?” she said. “We would all want it to be successful.”

In addition to a seasonal farmers market, LEPFA hopes to organize a food truck gathering on Mondays, when market vendors are closed. Free music and other events are also in the works to get more people to the market this summer, Keith said.

Pine is optimistic that the urban market will become a big draw for city residents and tourists alike.

“You’ve got this location that has eateries, specialty shopping, right on the water’s edge,” Pine said.

“We can be more than a farmers market.”