Bishop Boyea gets an earful from Lansing Catholic, IHM parents 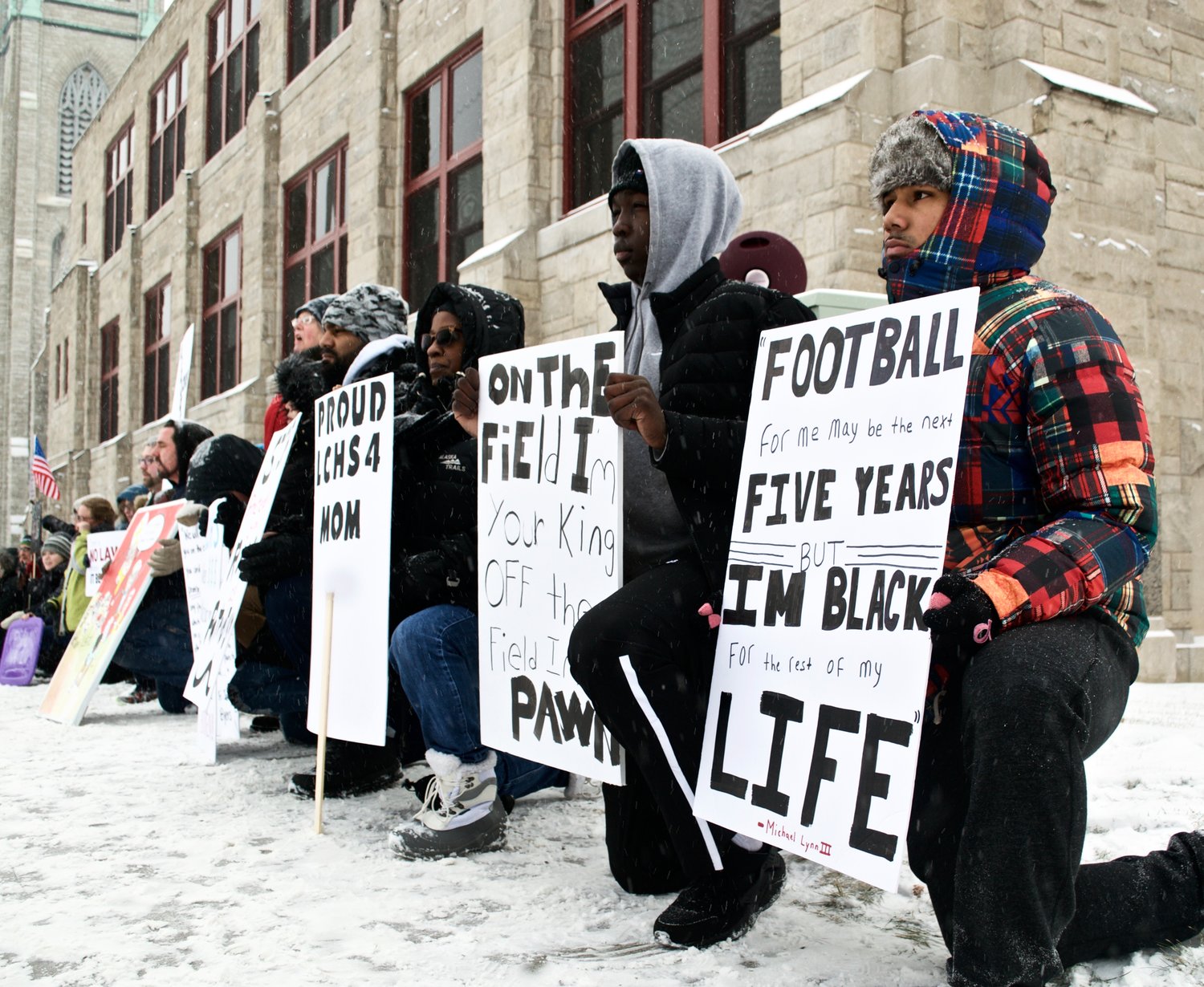 Posted Thursday, January 25, 2018 9:43 am
Lawrence Cosentino
A door opened at Diocese of Lansing on the morning of Martin Luther King Day.

Outside the door, over 150 people marched in freezing weather to protest the treatment of student athletes at Lansing Catholic High School who took a knee during the national anthem at sporting events.

A man emerged from the door and offered coffee to the protesters.

Protester Tashmica Torok was ready. Put that coffee on a table, and bring Bishop Earl Boyea to talk with us over it, and you’ve got a deal, she told him.

“I’m the bishop,” the man said. It was a welcome surprise for Torok and a group of student athletes and their parents.

There appear to be no blacks on the teaching staff at LCHS. The 2017 Cougar yearbook, “Evolve,” shows 35 teachers and eight administrators, counselors and chaplains. It’s impossible to definitively determine ethnicity by looking at a picture — nor do many people proclaim or identify with any particular group — but there are no black faces among them.

The Lansing Catholic board of directors has no blacks and one person of color, Cristo Rey Community Center director Joseph Garcia.

At the Jan. 15 audience, Paul Torok told the bishop that pervasive lack of diversity is not an abstract issue for children of color like his son.

Torok was pleased with the meeting, but disappointed at the circumstances that he brought it about.

“We’ve sent emails for two months and didn’t get a meeting until we showed up with 150 people and a bunch of signs,” he said.

Boyea met with the group for about an hour and a half. The superintendent of school for the diocese, Sean Costello, was also present.

Lansing Diocese spokesman Michael Diebold confirmed that the meeting took place and that four parents were present, but he declined to describe it further. Paul and Tashmica Torok said the bishop gave them a sympathetic hearing.

“We talked and he listened,” Paul Torok, said. “I felt the bishop was genuine in hearing our concerns.”

The parents want the schools to end the threat of punishment, from benching of athletes to suspension from school and possible expulsion, for taking a knee during

the anthem or the Pledge.

They told of racist incidents involving the use of racial slurs and the taunting and shunning of their children who protested.

Boyea mostly listened, but he said the “sin of racism” needed to be addressed. The bishop told the group he would never experience racism the way they had, he asked them to keep their children in school.

“He seemed moved by the stories we shared,” Paul Torok said.

“We’ve been struggling to have a conversation that is not about them explaining rules to us or telling us that we’re wrong,” Tashmica Torok said. “I asked that he step in and be our advocate.”

The parents of the protesting students agreed weeks ago that they would no longer meet with diocese officials separately, fearing a “divide and conquer” approach.

Torok said his son is putting up a brave front, but the blowback from his taking a knee at IHM is giving them both a tough education.

“I’m white, and he’s opened my eyes up to how different his experience is from mine,” Torok said. “You have somebody that is trying to live out this Catholic social teaching of not standing down in the face of injustice and they’re trying to discourage him from doing that.”

For the first time in its history, LCHS took a holiday on MLK Day, setting aside the day for what Diebold called “diversity and sensitivity” training. IHM held classes as usual on the MLK holiday.

Both schools have found a way to put the student protests on hold. The national anthem was not played at the Lansing Catholic basketball game Jan. 12. (Kabbash Richards, the Lansing Catholic player who took a knee at the Williamston game Dec. 8, was benched anyway.) The morning Pledge of Allegiance has been suspended at Immaculate Heart of Mary.

Among themselves, the group of parents call the no-anthem, no-pledge strategy “draining the pool,” in reference to a Las Vegas hotel that sidestepped conflict by draining its segregated pool when African- American singer Dorothy Dandridge stayed there.

Paul and Tashmica Torok hope the schools will restore the anthem and pledge as opportunities for the protesting students to express patriotism — one of the Catholic virtues stressed at Lansing Catholic and IHM — in their own way.

“It’s just the start of communication, but it really felt successful to me,” Paul Torok. “That picketing provided us an opportunity to tell our side of the story. We’re putting our trust in his sincerity and we will see how they respond.”