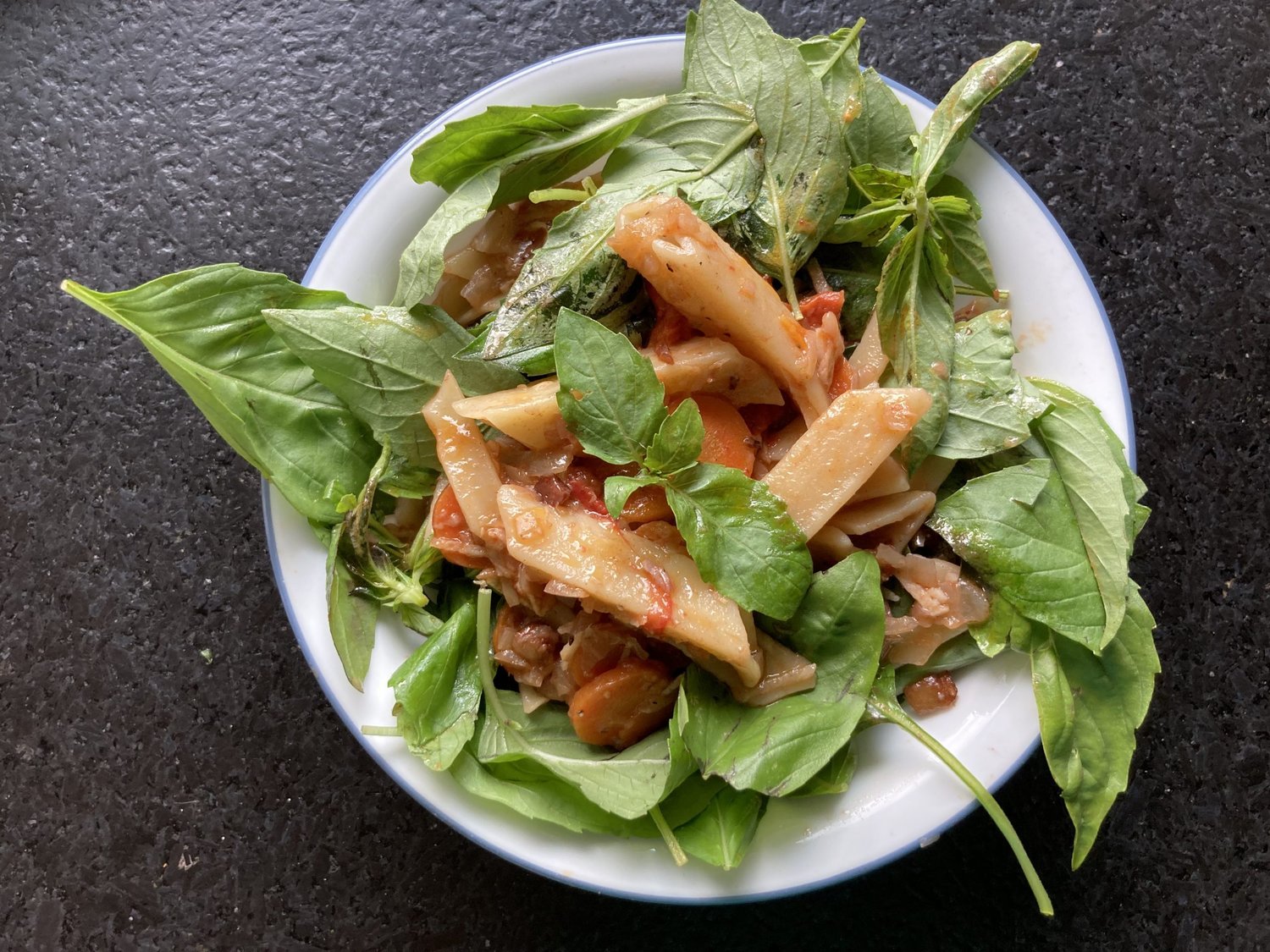 My children have an arrangement with an area farmer. After the weekly farmers market, he supplies them with surplus produce, which they sell at a roadside stand in front of our house. They split the proceeds 50/50.

One of the things that’s nice about having a farmstand at the end of your driveway is that you will never run out of onions. And then there is the slippage – produce that we have to pull if it gets a little soft, even though it’s totally edible. Each night, I’ll go through the unsold tomatoes and cull the ones that are too soft. I’ve been using these extra-ripe balls of flavor in a particular pasta dish that comes together amazingly quickly, especially given how from scratch it is.

For this and many other dishes, a pasta basket is very helpful. It’s essentially a perforated pot that slides inside a larger, non-perforated pot, allowing you to cook and remove things from boiling water without pouring it through a colander each time. I use my pasta boiler in many ways, some of which have nothing to do with pasta (when making soup stock, for example, but that’s a different story).

Today, it’s about the marinara — that’s also a carbonara. And then I smother it with fresh basil. In the end, it’s a fresh, summertime basil pasta salad that comes together as fast as you can chop and stir.

This sauce is as fresh as your ingredients. And this time of year, freshness has no limit. The tomatoes should be the ripest, soft and heavy enough to almost split their skins.

1 pound of tomatoes, either culled from your personal farmstand or otherwise acquired, cores removed

1/2 pound cured pork belly, such as bacon or pancetta. Bacon ends, which can easily be chopped into cubes, are ideal.

2 (or more) cups of fresh basil

Heat enough water in a pot to cover the bottom of the pasta insert by a few inches. Add a tablespoon of salt to the water. Turn the flame to high. While the water heats, chop the cured pork belly. It’s easier to do this cutting if the meat is partly frozen. Fry the pork on medium, occasionally stirring, until brown and crispy all around.

When the water in the pasta pot reaches a boil, add the cored tomatoes. As they simmer for about five minutes, prepare a bowl with cold water, ideally with a few ice cubes floating in it. When it’s time, remove the pasta cooker and roll the tomatoes into the ice bath. Remove the tomatoes from the water when they are cool enough to handle. Slip off the wrinkled skins and put the tomatoes in a bowl.

There should be a decent amount of grease in the pan from the pork. If not, or if you aren’t using pork, add 2-4 tablespoons of olive oil, so the pan is plenty greasy. Add the minced onions to the browned pork pieces, with the heat still on medium and cook until the onions become translucent. Add the carrots, thyme, half of the garlic and the wine. Season with salt and pepper, and let the sauce sizzle for a few minutes. Add the tomatoes, mash them with a fork and stir them together to simmer.

Turn the heat under the pasta boiler, bring it back to boiling, add the dried pasta and cook for the required time. Drain the pasta and toss it with a shot of olive oil and the remaining garlic.

Add the pasta and stir when the tomatoes have melted into the sauce, and it’s simmering nicely. Throw on some cheese and allow it to cook down. If the pan is drying out, dip a cup into the noodle and tomato cooking water and pour it into the pasta.

Simmer for about five minutes. Then turn off the heat and allow it to cool. When still warm but not hot, toss in the basil leaves and serve.