Broad Museum leans into the legacy of Zaha Hadid 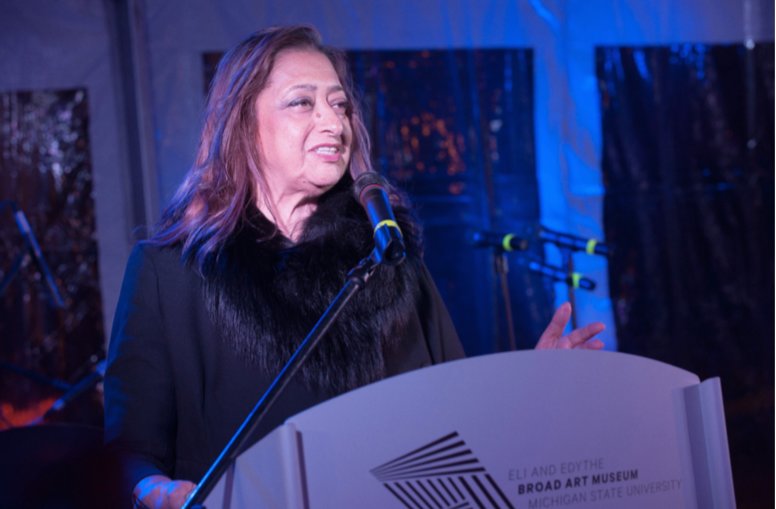 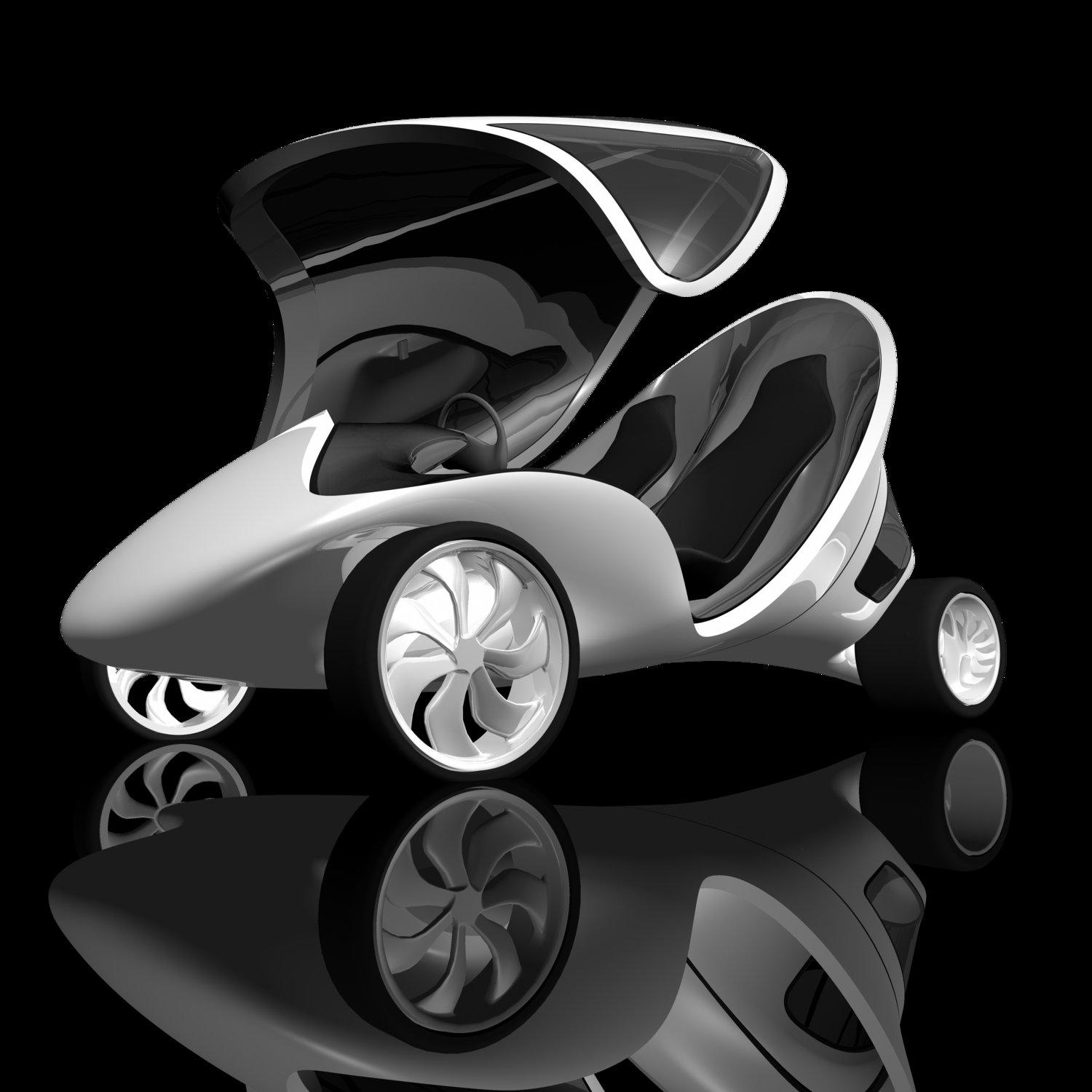 A hydrogen-powered, zero-emission “Z-car” designed by Zaha Hadid never made it past the prototype stage, but it’s now part of the MSU Broad’s permanent collection.
Courtesy MSU Broad Museum 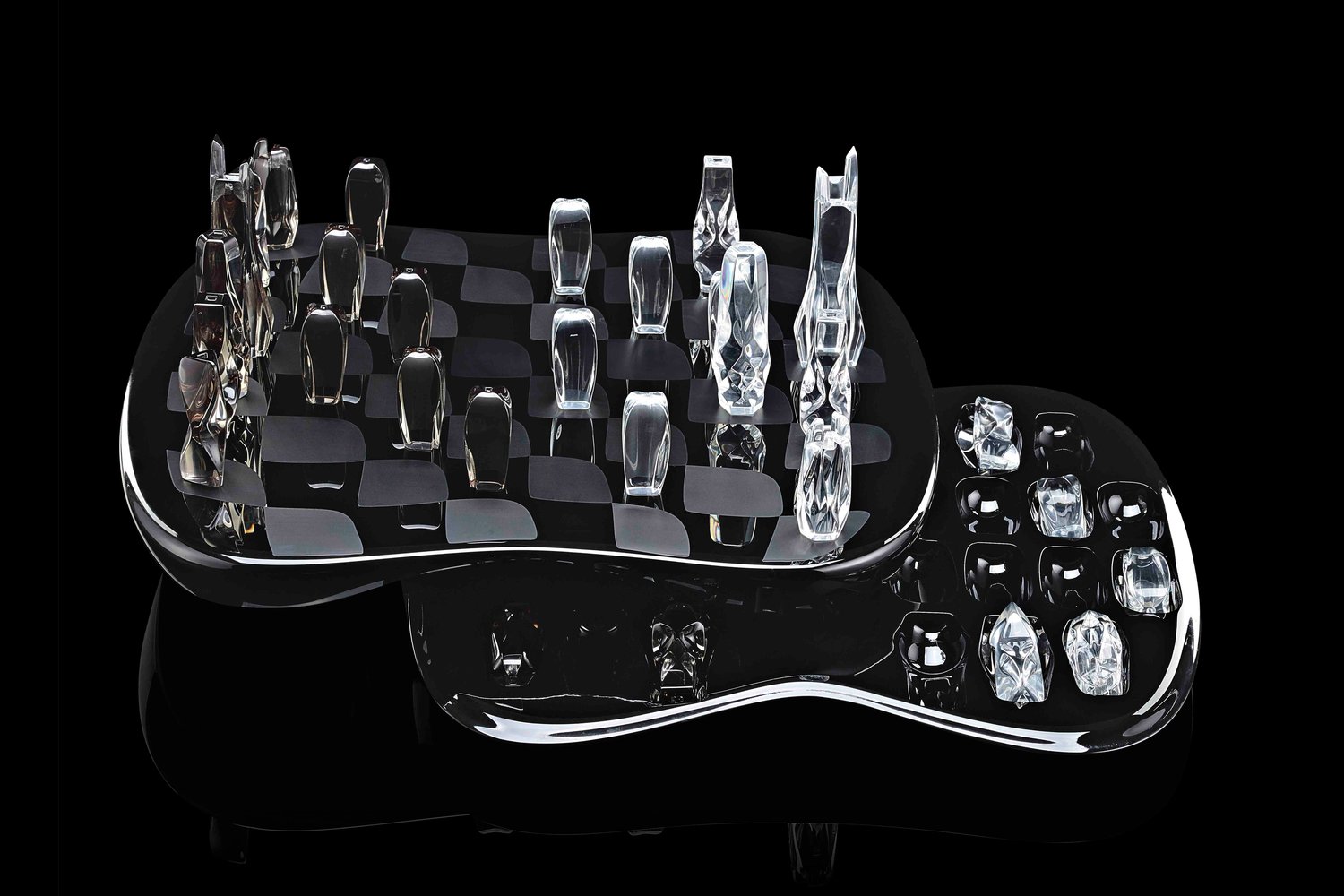 White is black and black is blacker in “Field of Towers,” a chess set that resembles a miniature city of Zaha Hadid-designed skyscrapers.
Courtesy MSU Broad Museum 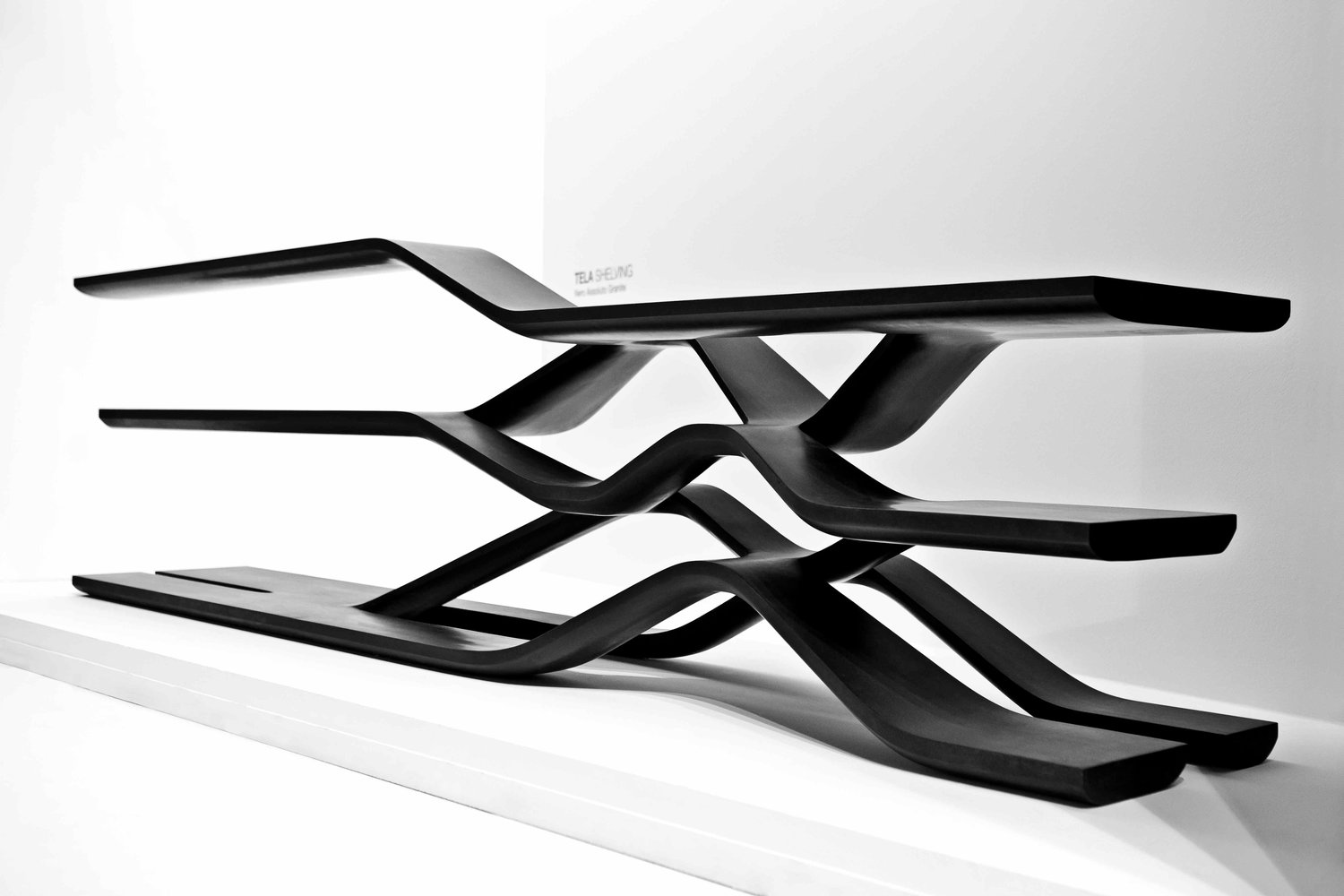 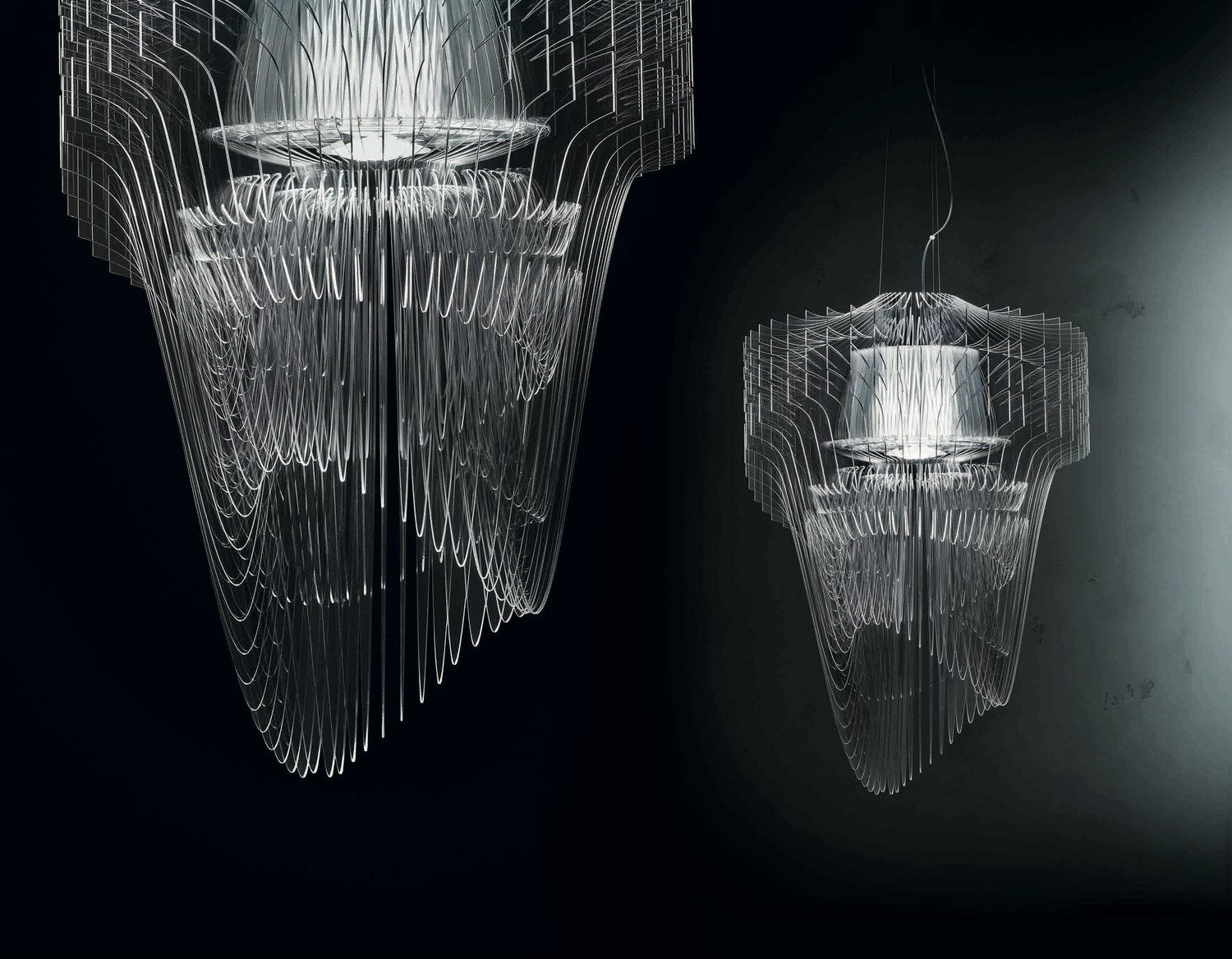 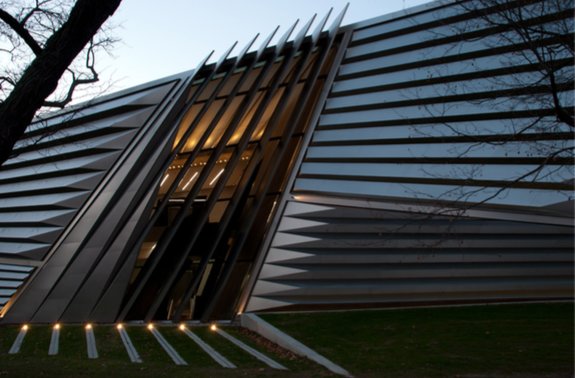 “Zaha Hadid: Untold” includes a wealth of material exploring the principles and processes Hadid applied to the design of the museum itself.
Courtesy Kevin Marshall, Integrated Design Solutions, LLC, and the MSU Broad Museum
Posted Thursday, September 8, 2022 12:00 am
Lawrence Cosentino

Zaha Hadid, the visionary architect of the Broad, who died in 2016, designed every object in the exhibit, from an egg-shaped prototype electric car to panoramic carpets, swooshing furniture, shoes, clothing, dishes and saltshakers. And all of it is leaning in.

Not since John Malkovich slid down the tunnel into his own brain in “Being John Malkovich” has a single consciousness taken over a space so completely.

“It’s unlike anything we’ve done here,” Broad Museum interim director Steven Bridges declared. “How often do you have the opportunity to put an artist’s work inside their own architectural structure? It’s truly unique.”

In every corner, every nook, everywhere your neck can crook and your eyes can look, this is Planet Zaha, from cellar to ceiling, tea candles to skylights, rostrum to rest room.

Above all, the Broad and its staff are celebrating its 10th birthday by leaning in, wholeheartedly, to embrace its unique design and visionary creator.

Last week, detailed color plans were taped to the museum walls as a crew unpacked crates and strategized over placement, lighting and a myriad of considerations specific to each object. The Broad team met with Hadid’s people weekly, via Zoom, every Tuesday for more than eight months leading up to the opening.

Unauthorized photography was forbidden, but the exhibit was taking dramatic shape. Newly hatched from its crate, one of two existing prototypes of Hadid’s Z-car, an egg-like electric car that never went into mass production, nestled in the airy northwest gallery. A seductive shoulder, green as a tree frog, peered from a hippo-sized bundle of packing paper — a Zaha Hadid sofa was waiting for a home.

Larger pieces, including miniature versions of Hadid’s designs for buildings around the world, basked in bands of natural light orchestrated by Hadid herself. Others sprang darkly from the inner convergences of the Broad Museum’s jewel-box design. In a hermetic, windowless first-floor gallery, a room-filling array of pancake-like, golden shapes floated at various heights, with no visible means of support. A mysterious scenario Hadid dubbed “Dune” was forming.

“This is a kind of living room set, even if it may not look like that at first,” Bridges said.

The undulating benches, desks, shelves and other furnishings were solid to the touch, but the whole ensemble was so delicately, amorphously shaped it looked as if it could be blown into nothingness by the slightest breeze.

Exquisite shapes waited to be unpacked: a cluster of tables with organic stalks like lily pads; a red chair curled like a fortune cookie from a single circle of carbon fiber; a pair of high-heeled shoes black and spiky enough to make the Devil forget Prada.

Graphic design flourishes on the floor will help to further unify the experience and guide the viewer through the galleries. In an upstairs gallery, a virtual reality set will enable visitors to engage in the design process along with Hadid.

Hadid’s audacity and unity of vision, combined with the sheer range of objects included, will have visitors peering at their toothbrushes the night after their visit and imagining the bristles at a 45-degree angle.

“Nothing was too small or insignificant to be off-limits,” Bridges said. “She gave everything a fresh, rejuvenated perspective.”

If there’s a single founder of this visual feast, it’s former Broad Museum director Monica Ramirez-Montagut, who left the Broad in June to become director of the Parrish Museum on Long Island.

Ramirez-Montagut wanted more than a spectacular show. As a trained architect, she also wanted to demonstrate how the principles and methods Hadid applied to a car, a shoe, a desk or a salt shaker also apply to the Broad Museum itself.

In 2006, Ramirez-Montagut worked on a Hadid retrospective at the Solomon R. Guggenheim Museum in New York City, but that exhibit was more architecture-focused than the one at the Broad will be, assistant curator Rachel Winter said.

“We’re thinking about design in the broader sense, how design factors into our lived experiences,” Winter said.

She added that Hadid and her prolific design firm have produced a lot of new work in the intervening 16 years, since the Guggenheim retrospective, and much of it is on display at the Broad.

“Zaha Hadid: Untold” also leans into the Broad’s growing commitment to mounting exhibits with local ties and regional importance. Recent exhibits at the Broad have tapped into Lansing’s car culture, MSU’s long tradition of agricultural research, the prison system in Michigan and many other local roots. What could be more local than the building itself?

“It’s a moment for the museum that I’ve been thinking a lot about,” Bridges said. “How is this museum, and the experiences you have in it, truly unique to this university, this context? This exhibition will mark a signal, a shift, in thinking more exactly about that.”

It’s a permanent shift. Many of the objects on display, including bigger items like the furniture and the C-car, are now part of the MSU Broad’s collection. Some were donations; others were purchases.

“Now we have a significant collection of her work — one of the largest in North America — here at the museum,” Bridges said.  “We’ve always been identified with Hadid, but having her legacy grounded in our collection, as part of who we are, is all the more important to us, moving forward.”

Ramirez-Montagut’s strategy of using a Hadid retrospective to educate visitors about the museum itself is embodied most explicitly in a lower-level exhibit devoted exclusively to the origins, design and construction history of the museum.

The exhibit includes schematic designs from Zaha Hadid Architects and records from the architectural competition that kicked off the project, letters from Zaha Hadid as she monitored the design and construction process, and many other documents never before seen publicly. Winter, Bridges and the Broad team pulled the information from the Broad’s archives, the MSU Library Special Collections, the archives of architects and contractors who worked on the museum and many other sources.

To keep the momentum going, the Broad will launch a series of architectural tours of the building on the second Sunday of every month, beginning in October.

There’s another sign that the Broad is leaning into its Zaha Hadid legacy. The exhibit brochure sidesteps academic jargon, for the most part, and even includes regular people’s fanciful reactions to the building, including visual comparisons to a grilled sandwich and a ravenous shark.

“Zaha was a playful person and brought fun to her designs,” Winter said. “That’s another thing audiences will learn about.”

“People referred to the building a lot of different ways — the shark, the spaceship,” Bridges said. “Why not embrace these imaginative responses? There’s something fun and enjoyable about that.”

Ramirez-Montagut took much the same view in a 2019 interview, as she strategized how to take the community on a deep dive into Hadid’s thought process.

“Whatever nicknames the community is giving the building, you embrace it, but with the understanding that there’s a lot of meaningful design decisions behind every single aspect of that building,” she said.

Winter hopes the lower-level exhibit will “bring much more information” to the ongoing discussion.

“Zaha was incredibly innovative and insightful, but it was never arbitrary,” Winter said. “She had an extensive background in math and philosophy. She always imagined things with geometric principles, with architectural and art history in mind.”