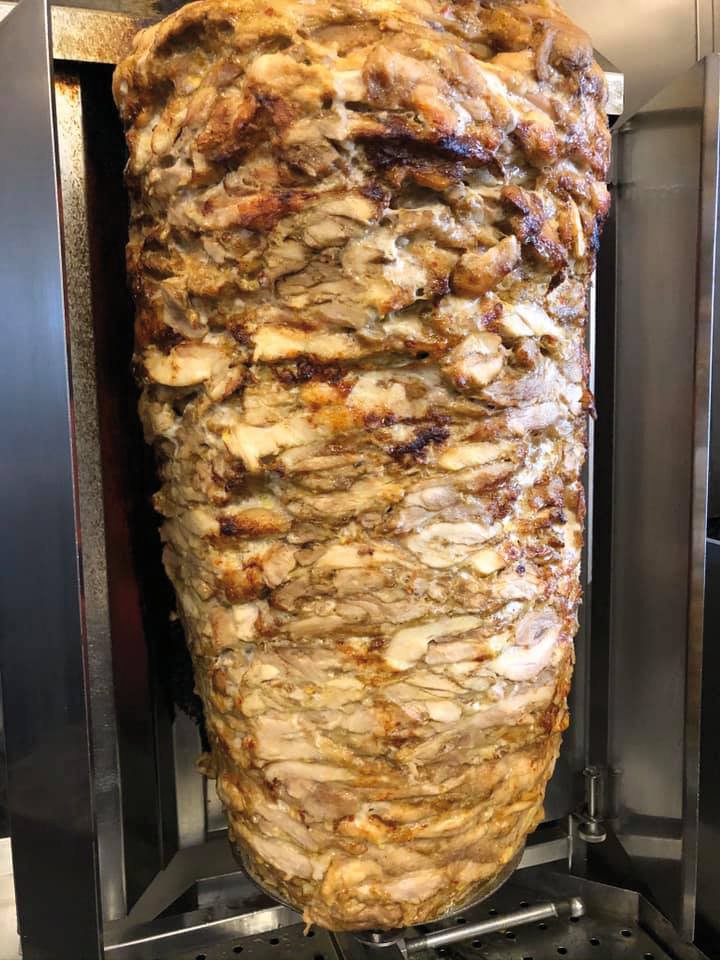 When I was a student at Sexton High School, we had an hour-long lunch and an open campus. My friends and I frequented the usual suspects on West Saginaw, including a now-defunct Blimpie location that today, in a totally different way, is once again the site of one of my favorite lunch spots since it now houses Choupli Wood-Fired Kabob.

In a way, Choupli is like Subway for Middle Eastern food. Your food is prepared in front of you, and fried items are made to order. On a recent visit, I chose a halloumi and mushroom plate ($10.29). The meatless entrée includes chunks of one of my favorite cheeses, halloumi. This cheese can withstand high heat and becomes irresistibly gooey and decadent when grilled or seared. The plate comes with three sides — I chose rice, fries and house salad. The rice is the traditional Middle Eastern rice pilaf, which includes small pieces of vermicelli noodles and is buttery perfection. The house salad has chunks of fresh, crunchy cucumber, romaine and tomato and comes with a tangy vinaigrette.

Mr. She Ate, the chicken shawarma fan club president, had a shawarma wrap ($6.99). He hailed it as “one of the most affordable lunches in town and also one of the most delicious.” A drive from downtown Lansing, where we both work, to Choupli is quick enough for a lunch hour and allows us to have gossipy conversations about downtown characters without fear of being overheard. Not that we’d ever do that.

On a return visit, Mr. She Ate leveled up and ordered the lamb kofta plate ($12.29.) As one of the most expensive items on the menu, it comes with three sides and is still entirely reasonably priced. For those unfamiliar with kofta, imagine a cylindrical-shaped burger pattie spiced with allspice, coriander, cinnamon and cumin. It’s melt-in-your-mouth delicious, but here’s the thing about kofta: if it’s dry, it’s awful.

But, no worries. The kofta at Choupli is fantastic. It’s moist, juicy and well-spiced. He ordered it like an absolute pro, with sides of fries, house salad and rice. One of the world’s best condiments is garlic sauce, and a bite that includes both kofta and a French fry with a dip in garlic sauce cannot be beaten. The crispiness of the fries, the meatiness of the kofta and the tang of the garlic is a tantalizing combination.

I chose the veggie kabob plate ($10.29) and loaded it with more salad, hummus and rice. I’ve been trying to be much more mindful about incorporating meatless meals into my diet, and I find that when I pair my vegetables with a starch-like rice and a healthy fat like hummus, I don’t miss the animal protein. This checked all the boxes. I dipped each bite of grilled bell pepper, tomato and onion in the smooth, rich hummus. I requested extra banana pepper rings and pickled turnips on my salad because I love the added pickled flavor.

What to expect if you haven’t been to Choupli? A quick meal. It is fast and casual. You place your order and pick it up at the counter before sitting down. Fried items take a few extra minutes to prepare, but everything else is ready, and the line moves quickly. For under $20, you can have lunch for two if you’re thrifty with the wrap options. But if you’re hungrier than that, which I always am, two plates will still only set you back around $25.

One of the things I love best about the Greater Lansing area is our absolute infatuation with Middle Eastern cuisine. I’m happy to have solid, delicious options from one side of town to the other.

I spend a fair amount of time in the United Kingdom, where, depending on whom you ask, either fish and chips or bangers and mash are typically considered their national delicacy.

While studying abroad in London, I had my share of fish and chips … and one less-than-stellar traditional English breakfast.

However, I found the kabob shops a far more preferred option. In Europe’s big cities, Mediterranean-inspired fare is found on roughly every other corner. Meat piled high on spires or spits and shaved into pita bread offer sustenance for hungry bespoke suits during the day or sweaty, starving ques outside the club after long nights out (or so I’ve heard, wink-wink).

Here in the Lansing area, there are several quality restaurants, some local franchises, others strong independent operations that serve robust flavors rooted in the Mediterranean basin. These flavors are influenced by a wide reach of nations from Algeria and Spain in the western Mediterranean Sea to Turkey, Syria, Iran and Iraq toward the East.

Choupli Wood-Fired Kabobs in Delta Township is a no-frills kabob shop with a handful of tables but lots of takeout traffic. Meals are ordered as either wraps ($8.99-$9.39) or plates with a choice of three sides ($13.99-$16.39). The staff is eager to please with spoon-heaping portions of side dishes onto your plate or to-go box. Choupli isn’t as fancy as some of the other more well-known local Mediterranean restaurants, but for a quick pop-in and pick-up, it’s on par with other kabob shops across the pond.

What’s not on my plate

My better half enjoyed the soslu patlican, a tomato-based eggplant dish served cold. She said the sauce is faintly sweet and liberally smothers generous cubes of eggplant, chunky tomato and red pepper. She is spice-averse and had no complaint with the hint of spice in this dish, nor was there any comment about the often-overbearing oiliness that other soslu patlican’s have.

I have continuously documented my wholehearted disdain for the devil’s fruit (more commonly known as tomato), and this offering was no exception. The baba ganoush — a hummus lookalike that includes pureed eggplant instead of chickpeas — was a delight for my favorite dining partner. She said the olive oil and lemon juice played in the background allowing the roasted eggplant and tahini flavors to shine through.

The best Chicken shawarma in our area can be as debatable as the best pizza. Lots of people have strong opinions. Choupli makes a convincing argument to at least be in the conversation. Tender and succulent, it has a deep flavor profile that includes garlic, turmeric, cinnamon and cardamom. The meat rotates on a spit until crispy on the outside and is then shaved into a dish to continue simmering in its juices.

Choupli’s shawarma is best enjoyed with the house-made garlic sauce. On the first visit, we loved it over the rice, and the second time with the bulgur wheat (a whole grain that’s like a pilaf) was just as good.

The beef kabob was juicy, tender and smartly seasoned to let the quality of the meat speak for itself. The kabobs are grilled as you wait over coals on a skinny rectangular grill and paired to perfection, either as a wrap or over rice, with the pickles and banana peppers made for an awesome sour and savory contrast.

Side note: The soft pita bread is individually wrapped and ever-fresh. It is simply delish every time. That consistency alone deserves acknowledgment.

The Lamb Kafta was very flavorful, with garlic and notes of cumin and other herbs. This ground lamb dish is shaped into a skewered oblong meatball. The garlic sauce was better on the shawarma (garlic overkill?), but when the lamb was combined with the pita dipped in olive oil drizzled hummus with a dusting of paprika, “yum” is all you can say.