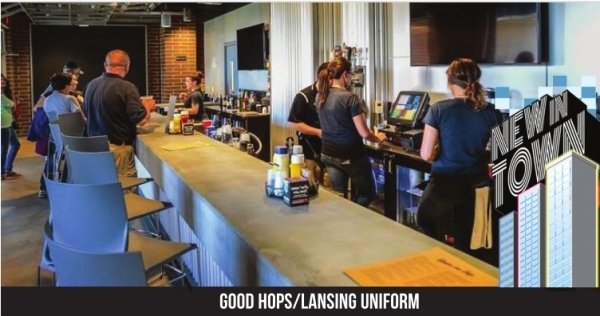 Posted Wednesday, July 15, 2015 12:00 am
Allan I. Ross
You think baseball games, you think hot dogs, beer and maybe the old peanuts-and- Cracker Jack combo. But Cooley Law School Stadium has gone the gourmet route with its new addition, Good Hops. The specialty hamburger-and-craft-beer station, situated in the new construction beyond the outfield, is part of the stadium’s push to be more inclusive with the community and to offer baseball fans more than your typical ballpark fare, said Nick Grueser, Lansing Lugnuts general manager.

“This came from listening to what (Lugnuts attendees) wanted and trying to accommodate them in a unique way,” Grueser said. “And the feedback has been extraordinary.”

Good Hops, which opened June 1, is a long and narrow space, seating about 20 people. Grueser said it’s small “by design,” to not-so-subtly direct people’s attention out to the action on Jackson Field below. It offers 12 craft beers on tap and seven inventive hamburger creations, such as the Wynken, Blynken & Nod ($12), with beef brisket, caramelized onions, chili and shredded cheese, and the Hotel California ($10), stacked with avocado, Monterey Jack cheese, and breadand-butter pickles. All burgers each come with hand-cut fries and house-made ketchup; chicken, veggie and bison patties have a $2 upcharge.

Given the work put into the menu, Grueser said Good Hops works as both a ballpark stopover and a destination dining location for downtown workers. For now, it’s only open during games, but said that may not be the case forever.

“We’re tossing around the idea of keeping it open (to the public) once construction finishes,” he said. “It makes sense. And it’s allowed us to create three new venues to give more seating and dining options. It also gives us space to be able to offer private events year round.”

Directly adjacent to Good Hops is a new banquet facility, called the View. That can hold about 150 people, and is connected to the patio, which can hold another 80-100. The Tailgate Terrace is a game-only area that seats about 700-800 people at picnic tables. Grueser said that over a season, about 25,000 people will make their way to that area. All together, the new construction comes to about $13.8 million.

And there’s the (literally) built-in customer base directly above it: the Outfield apartments, 84 units of downtown under construction in the Lugnuts outfield by the Gillespie Group. Gillespie will own and operate the three residential floors, while the Lugnuts will operate the ground floor, which is city-owned. The apartments won’t be complete until next summer, but the finishing touches on the View and Good Hops should be done by the end of the season.

“(Cooley Law School Stadium) has been here for 20 years now, and all these changes are just something that keeps us competitive,” Grueser said. “You can’t stay the same forever.”

For 45 years, Lansing Uniform has supplied Metro Lansing police departments, EMS workers, firefighters, bus drivers and DNR officials with all their uniform needs. The longtime business will soon vacate its 2,200-square-foot REO Town location for expanded digs on the city’s south side.

“It’s nice to see REO Town going through this current renaissance, but there’s just no parking here,” said owner/president Jim Downs. “This move will allow me to expand my retail operations, make it easier for customers getting on and off the highway, and provide better parking access.”

Downs will move into a 24,000-squarefoot space adjacent to Rycus Flooring at 5301 S. Pennsylvania Ave. His father, James P. Downs, started Lansing Uniform in 1970 and sold it to his son after he retired. When it started, Downs said his father serviced mostly industrial workers, but evolved to fill the local niche for law enforcement, first responders and public transit workers. His services mostly include retail sales, alteration work, and patch applications.

Downs’ father will still own the REO Town building at 1141 S. Washington Ave., but so far no businesses have expressed an interest in taking over that space. Downs said he expects to complete his move by Oct 1.

Last month, Metro Lansing lost two businesses with personality. On June 18, Grand River Coffee Co. called it quits after the owners decided to retire. And downtown Lansing’s Spotted Dog Café served its last chicken salad sandwich on June 25. No word yet on what new businesses will take over those locations.