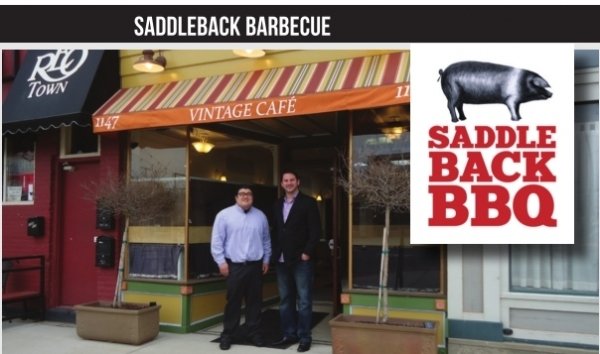 Posted Wednesday, April 22, 2015 12:00 am
Allan I. Ross
Business partners Matt Gillett and Travis Stoliker plan to open Saddleback Barbecue, a Southern-style barbecue joint, next month in REO Town. It’s named for the British saddleback, a distinctive type of pig with black-and-white bands. Gillett settled on the name as a tribute to his roots … sort of.

“I grew up in Mason, where there are a lot of pig farms, but I never paid any attention to them,” Gillett said. “When I was looking for a name, I did some research and came across the saddleback, which has a neat sound and an interesting look to it. That was that.”

Saddleback Barbecue will take over the former location of the Vintage Café, which closed in December. Gillett, a 17-year veteran of the food service industry, had been looking for something to do for the next stage in his career. A few years ago, he and his Stoliker became barbecue hobbyists, not knowing where it would lead.

“We went down to Georgia and bought a smoker from (competitive pit master) Lonnie Smith,” Gillett said. “We cooked with him for the Big Pig Jig last year, which is like the Super Bowl of smoking, and won the grand championship. We learned about the process.”

The experience planted the seed of an idea to open a barbecue restaurant, and Gillett began to put the pieces together. He developed a fundraising model and pitched the idea at the Hatching, a monthly East Lansing event that awards $1,000 to promising local startups. (He didn’t win.) Still, Gillett said he was encouraged by Stoliker, who kept the idea alive, and continued looking for spaces. Gillett noticed the Vintage Café was available when he was looking at different space in REO Town. He made a call and things moved quickly.

“It all came together in three weeks,” he said. “I’m pretty sure first-time ventures don’t always go this fast.”

Gillett left his job as the wine bar manager at Dusty’s Cellar earlier this month to focus on opening Saddleback. The restaurant space is only has room for about 30 seats, but he hopes to get about 200 people in and out every day. For now, the plan is to keep the menu simple — sausage, chicken, ribs, pulled pork, brisket and just a few sides — but to emphasize “the craft.”

“Our brisket will be a 48-hour venture from beginning to end,” Gillett said. “It will be done in the wood-fed smoker that will be staffed 24 hours a day. It’s a position that requires a skilled worker, but it will be worth it. That big smoke flavor makes all the difference.”

Saddleback will also make all its own sauces. Gillett’s specialty is a Vernors ginger alebased reduction. There will also be mustard sauces and a rotating list based on customer feedback. Initial plans are to focus on lunch and early dinner crowds, but he may stay open later, depending on demand.

“I just don’t want to be in the position of running out of food,” Gillett said. “But I’m really looking forward to this. Barbecue has a ton of personality, and it’s the kind of food people will give a chance to. The best part is that it’s so diverse — there are so many ways to be the best.”