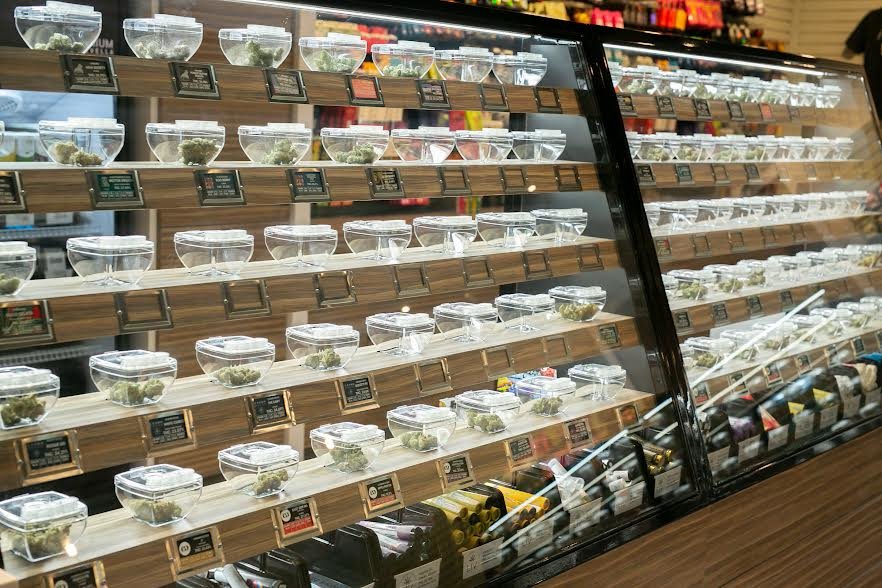 It’s also bringing some live entertainment to downtown Lansing next month as the official sponsor of the second annual 420 Music Festival at Adado Riverfront Park from noon to 11 p.m. on April 23. The concert will feature several artists, including Too $hort and Curren$y. General admission (for ages 21+) is $40. Guests will be able to legally smoke marijuana on site.

Common Citizen also recently partnered with boxing legend Mike Tyson to bring his California-based cannabis line to retail shelves in Michigan — including his favorite strains “Knockout OG” and “Pound for Pound Cake.” Both are available now at LIV. Tyson will also be at the store on April 23 to meet customers and sign some merchandise before the festival.

(This story was corrected to reflect accurate business hours  for LIV.)

Last summer, this column featured plans for a new pot shop that was initially set to open last year along Martin Luther King Jr. Boulevard between I-96 and Miller Road. Signs surrounding the construction site had billed it as the future fifth retail location for Common Citizen — a company founded by Michigan State University alumnus Michael Elias that labels itself the “largest” vertically integrated weed brand in the state with other shops in southeast Michigan.

At some point, those plans changed.

The Common Citizen banners were taken down this year and LIV Cannabis Co. set up shop there last month, becoming at least the 18th marijuana dispensary to open — and stay open — in Lansing within the last two years (Homegrown was the first to open its doors in early 2020).

The white brick storefront is sleek and ultra-modern with some major Apple Store vibes. The large windows and open floor plan made the space seem larger — and it’s already pretty big.

Customers have two options after they walk in the door: To the left is one of the most expansive (and expensive) head shops in the city. There are bubblers, bongs, vaporizers and pipes; just about every accessory you can imagine. The exceptionally friendly staff pointed me to a large hand-blown, tree-shaped glass piece inside their most prominent display. The price? $40,000.

I told them I’ll come back after I hit the Powerball.

To the right is heaven. Two unnecessarily large steel doors automatically swung open to reveal one of the widest assortments of cannabis goodies I’ve ever laid eyes on. It was like walking into Willy Wonka’s chocolate factory — a remark I’m sure the staff has already heard more than once. Large glass cases are filled with dozens of different strains, edibles, tinctures and concentrates. If you can’t find what you’re looking for here, then you don’t know what you want.

Aside from a focus on stunning interior design and a wide product selection, LIV co-founder Dennis Zoma also offered a brief statement about how the company is designed to be “community-forward” and provide “safe, high-quality” weed to patients and adult customers.

“Lansing has welcomed us with open arms, and we look forward to creating job opportunities, helping grow the local economy and giving back to this vibrant community,” Zoma said.

The grand opening festivities — which last through Thursday (April 7) — include steep discounts on several brands including Common Citizen, MKX, Kiva Confections, Dixie Brands, Mary’s Medicinals and High Life Farms. I naturally gravitated toward some of the cheaper stuff.

The Runtz and the East Side OG (among about six other Common Citizen strains) came in affordably priced prepackaged eighters for only $20. The Runtz were exceptionally dry nugs with a light, sugary scent and a mild, fruity flavor profile that resulted in a lackluster high: a short-lasting head buzz that left me wanting to smoke another joint as soon as I was finished.

But I’ll be back for some more East Side OG. These dense nugs were absolutely caked with creamy yellowish trichomes that radiated this perfectly complex, skunky-sweet sort of odor. The old school OG Kush lineage also came through with a spicy flavor profile with a hint of citrus. It also caused me to spend most of Saturday glued to a video game in a dazed state of relaxation. My budtender told me the shop’s first batch of East Side OG sold out in two days, forcing them to rush in more to meet local demand. Apparently, I’m not the only local pothead who loves it.

LIV is open from 9 a.m. to 9 p.m. The company — which also has retail locations in Ferndale and Battle Creek — also plans to expand into Lake Orion, Detroit and Pontiac this year and open a cannabis consumption lounge attached to the Lansing shop sometime next fall.

“Michigan’s Capital City — the epicenter of our state — was the most logical place to continue our expansion and further our mission of connecting people through the many wellness benefits of cannabis,” Zoma said in his statement. “The entire LIV Cannabis team is excited to help consumers in Greater Lansing create memories that enhance their lives through cannabis.”

Orders can be placed online at livcannabis.com. Free local delivery is available.