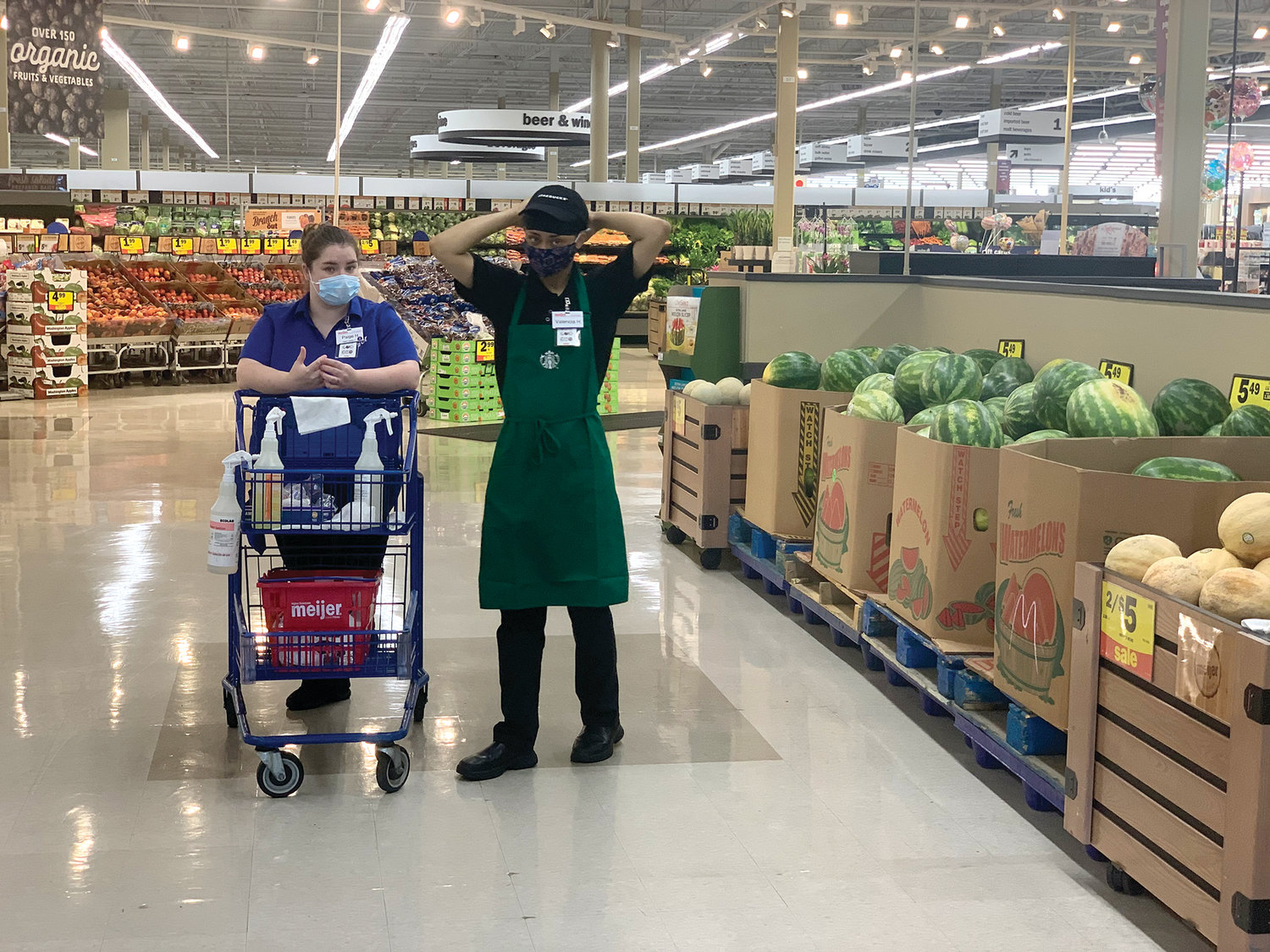 Meijer stores in Greater Lansing have employees keeping watch over entry points to ensure customers are wearing a mask. Under the executive order, only those with a medical intolerance and other limited exceptions can enter without one.
Kyle Kaminski/City Pulse 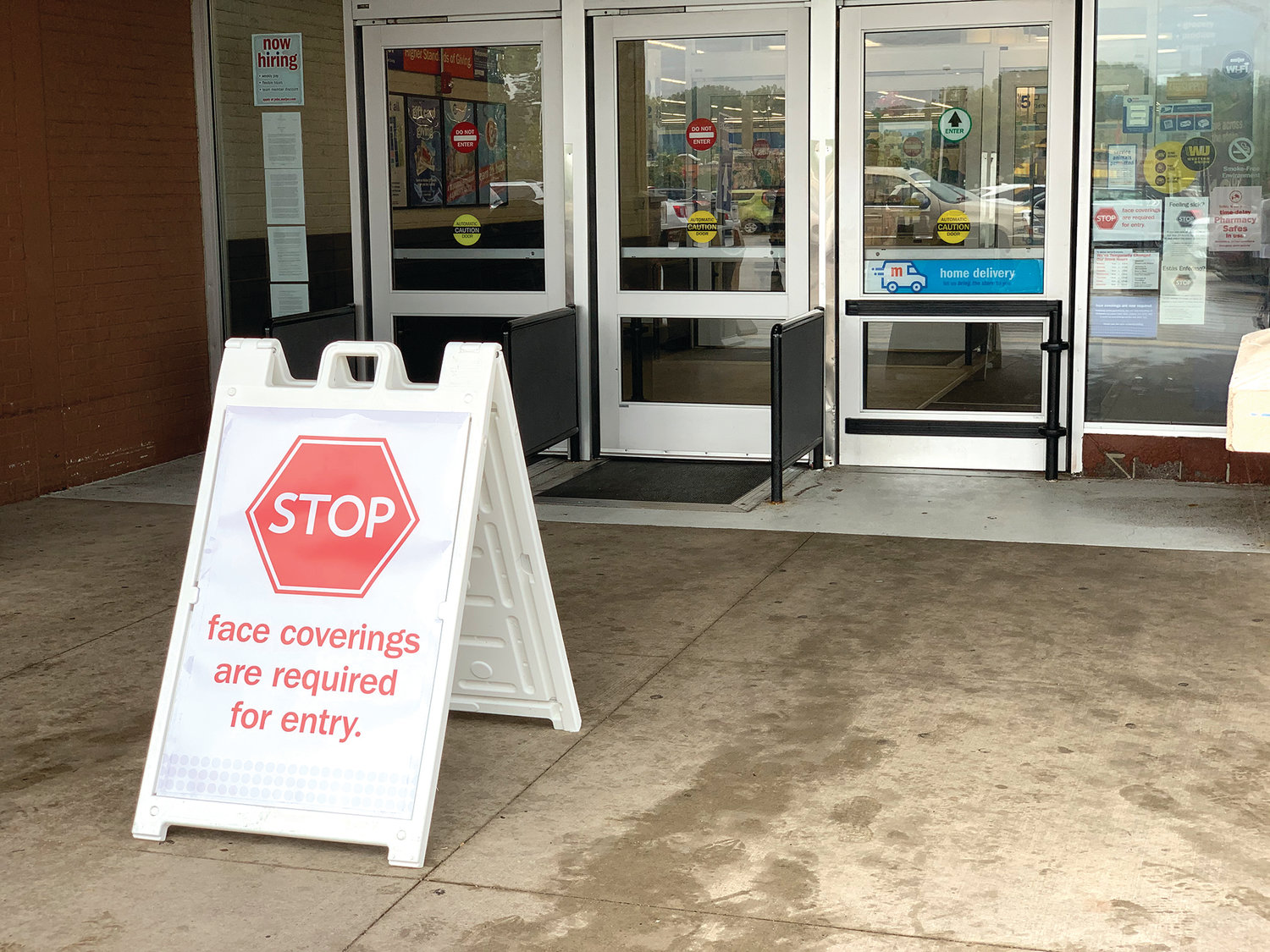 A sign at a Meijer store in Lansing warns customers to wear a mask while shopping.
Kyle Kaminski/City Pulse
Previous Next
Posted Thursday, July 23, 2020 9:10 am
Editor’s note

Lansing area residents were shocked last week when a knife-wielding assailant injured a 77-year-old man at the Quality Dairy in Dimondale. The attacker had been refused service for not wearing mask. He took out his anger on an innocent bystander, who was hospitalized in critical but stable condition. An Eaton County deputy sheriff later shot and killed the attacker, identified as Sean Ruis, 43.

But as unnerving as the episode was, it appears to be an isolated case involving confrontation over the new reality of masks— though that’s in part due to the exercise of discretion by so-called mask police.

This week’s cover story looks at how area residents are coping in general with Gov. Gretchen Whitmer’s requirement that masks be worn indoor in most situations. It also reports on the history of masks going back to the Spanish flu pandemic as well as the change in heart about masks that health experts locally and nationally have undergone since the COVID-19 pandemic struck the United States.

Grocery stores and other retailers across Greater Lansing have introduced a new type of frontline worker amid the fight against the ongoing coronavirus pandemic: the Mask Police.

Over the last few weeks, big box chains like Meijer, Kroger, Target and Walmart have deployed staff, usually in pairs, to patrol their entranceways, fending off maskless shoppers from coming inside and carefully monitoring capacity to ensure aisles and checkouts don’t become crowded.

Badged with some newfound executive authority from Gov. Gretchen Whitmer, these employees act largely as the first line of enforcement in preventing newly reopened retailers from becoming a breeding ground for COVID-19. Masks, officials have emphasized for months, are the solution.

“I’ve been called all kinds of names — every cuss word in the book,” said an employee at Target in Okemos tasked with ensuring customers wore masks last week. “People have been good. I’m technically supposed to say something, but I’m not about to put my life on the line for this stuff.”

Though compliance with the mask mandate appears to have made substantial progress in Lansing, a few customers strolled inside without a mask while employees looked the other way.

“It’s just not worth it,” she added. “People are going to do what they want to do anyway.”

City Pulse sent reporters to several major retailers across Greater Lansing over the last week to gauge compliance with the state mandate. And the vast majority of local shoppers appear to be masking up. Only a few bare faces were spotted among hundreds of customers in recent days.

Under an executive order on face masks released from Whitmer’s office earlier this month, all residents must continue to wear face coverings in indoor public spaces and crowded outdoor spaces unless they “cannot medically tolerate” wearing one, among other limited exceptions.

Whitmer beefed up that order late last week, further requiring businesses to do more than just post a sign about the mandate. The new order clarified that businesses can’t just assume that maskless customers are unable to medically tolerate wearing one. It demands confrontation.

Vail said staff should also be reminding maskless shoppers to put them on once inside.

Maskless shoppers must now give staff explicit “verbal representation” that they have a medical condition that prevents them from wearing a mask. They needn’t elaborate further or have any sort of written confirmation to display, and businesses shouldn’t pry further into that condition.

From there, businesses can choose whether to allow those shoppers inside, according to the order. And they’ll never be punished for turning away a maskless shopper.

“They can also work with customers,” Vail added. “I’ve seen businesses do things like more curbside pickup, or smaller shops that will actually bring out a few items for this customer to browse. At the end of the day, you have the option of who you want to allow inside your store.”

The Michigan Department of Civil Rights said businesses can remain in compliance with federal accessibility laws by providing those who do not wear face coverings with an alternative — like curbside pickup. Alternatively, retailers can continue to allow for customer medical exemptions.

“There are very few medical reasons to not wear a mask,” Vail added. “Asthmatics can wear masks. The actual portion of the population that cannot medically tolerate them is just so small, and if we can get mask wearing at about 80% or so, then we’ve covered most of everyone.”

Vail said those who are sufferering from traumatic experiences — like child abuse — and who have diagnosed stress disorders could have genuine issues with masks, as well as those with other mental disorders. But oxygen flow generally isn’t a problem for most, Vail emphasized.

State officials said violations are dealt with by local law enforcement in conjunction with state regulatory agencies. Individual shoppers can face a misdemeanor conviction and a $500 fine. Businesses could also theoretically face licensing consequences on a state regulatory level. (The state Liquor Control Commission has announced it will hold a hearing Thursday requiring the owners of Harper’s Restaurant and Brewpub to answer questions after 186 cases of coronavirus were tied to the business.)

In most cases, that enforcement first falls to lowly paid retail employees who are often hesitant to escalate tensions over an already polarizing debate over masks. Cops can be called, but it hasn’t happened in Lansing, and employees don’t expect that it will.

“We’ve had a few angry people that have just walked away,” said an employee at a Kroger in Lansing. “Most people just forgot to grab it or left it in their car. I think it’s all starting to sink in.”

The Lansing Police Department and the Ingham County Sheriff’s Office have yet to take a report on a mask violation since the order took effect. Sheriff Scott Wriggelsworth said he hasn’t even had any deputies respond to any close calls, but they could be handled like trespassing complaints.

It’s like adding “no mask” to the familiar line of “no shirts, no shoes, no service,” he explained.

“They can refuse service, but what might start as a mask dispute could also turn into trouble with a suspect. It really isn’t about masks once it gets to that point,” Wriggelsworth said. “We’re taking everything on a case-by-case basis, but we haven’t cited anybody for anything on this.”

“Emotions get involved and sometimes poor decisions could be made,” he added.

“Any business can call up the police and say there are people in the store that are refusing to wear a mask,” Vail added. “They should also be telling people to wear one and keep it on inside the store. Other than that, any other type of confrontation probably isn’t going to be productive.”

The enhanced regulations are designed to ramp up compliance in an order that already has unavoidable weak spots. Banning all maskless shoppers could pose an accessibility issue for those with bonafide health concerns, but even those shoppers increase the risk of transmission.

Still, shoppers across Greater Lansing appear to be playing it as safe as reasonably possible.

“I’ve only seen one person all day without a mask,” said an employee at a Walmart in Lansing.

Exceptions to Whitmer’s executive order on masks, in addition to the medically intolerant, include children younger than 5 years old, those eating and drinking while seated at a restaurant, exercising where masks would interfere with activity or while in a polling place.

In the last two weeks, every region of Michigan has tracked an uptick in new cases of COVID-19. Daily case counts now exceed 20 cases per million in all but one region in the state. State officials have casted the blame on “spotty compliance” with face masks requirements.

A study on different regions in Germany, for example, suggests the adoption of mandatory mask ordinances stilted the daily growth rate of COVID-19 infections by 40%. Models from the University of Washington also suggest 40,000 lives would be spared with a 95% masking rate.

“Wearing a mask is the right thing to do to protect our families, our businesses, and our economy,” Whitmer said last week. “If everyone in Michigan masks up, we can save thousands of lives and put ourselves in a better position to send our kids back to school in the fall.”

Will Lansing face another summer of gun violence?

FRIDAY, June 24 — For years ago, a man rented a handgun at a gunstore in Mason for use on the indoor shooting range, but then left the store illegally with the gun. Shortly thereafter, he …