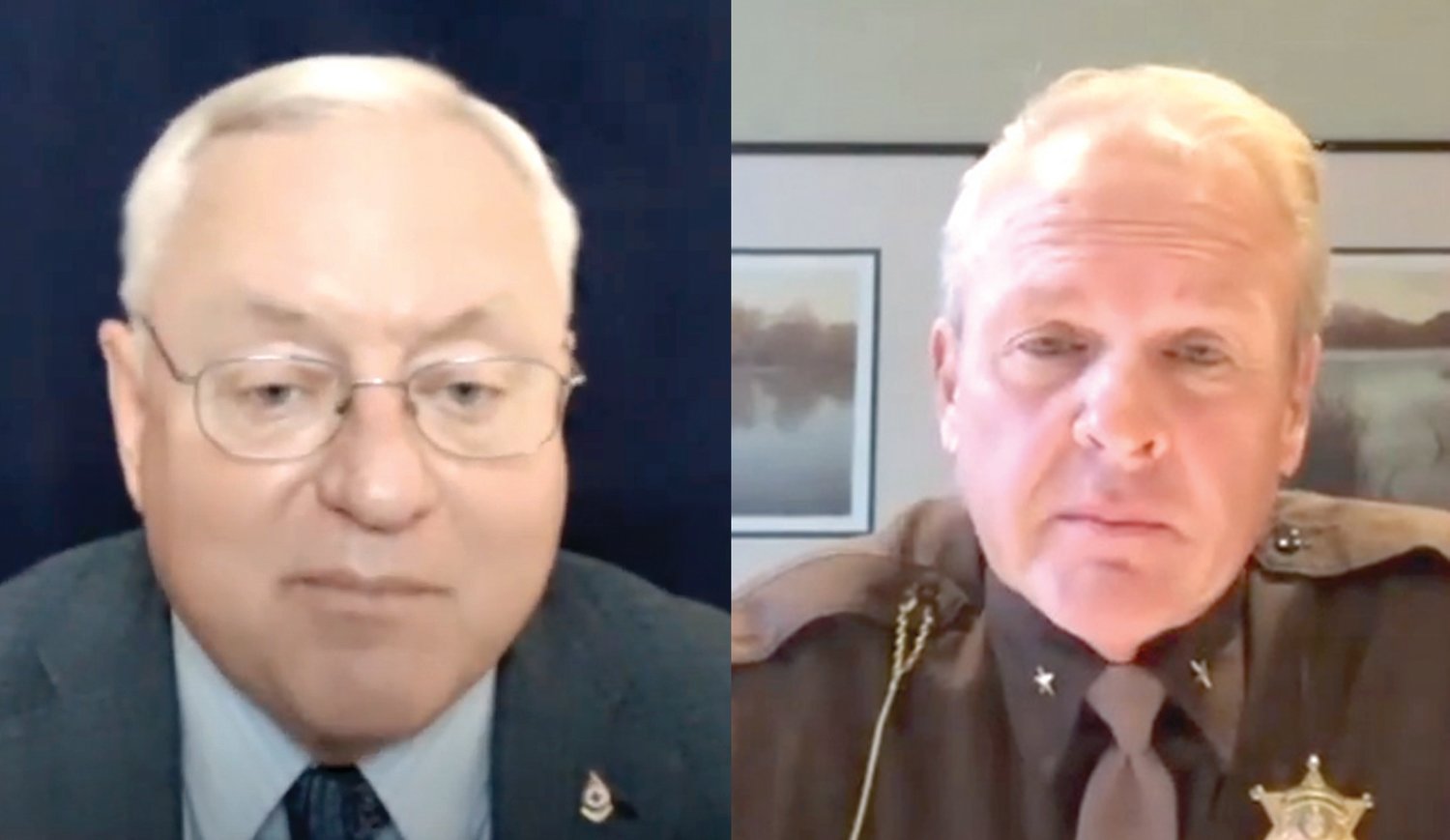 On Nov. 3 voters in Eaton County will choose between Sheriff Tom Reich, a two-term incumbent, and former state Sen. Rick Jones, who was sheriff for four years before being elected to the state Legislature. Each has more than three decades of experience in law enforcement. They sat down on Zoom together for a debate moderated by City Pulse editor and publisher Berl Schwartz, which is available here.

Reich, a Democrat, and Jones, a Republican, both declined to say whom they support for president — a sidestep nod to the purpleness of Eaton County, which Donald Trump carried in 2016 yet seven of its eight commissioners are Democrats.

Here are their opening statements from their Zoom debate, when Jones went first:

I’m a career cop. I started at 21 years old as a deputy, and I held every position to the Sheriff’s Department, including the jail administrator before I finally became sheriff. Why am I running? Many reasons. I’ve seen things going wrong at Eaton County Sheriff’s Department and I’d like to see changes. For example, we had a deputy who was on a routine traffic stop who snapped. He lost his temper. He brutally, brutally assaulted a citizen, grabbing him by the neck and the head, made an arrest, through him in jail, wrote a false police report. And why was the citizen exonerated? Only because he left a cell phone recording on the dash and it showed that he didn’t do a thing, not a thing. The deputy simply snapped. So, what happened? The sheriff called him in, he was allowed to resign, but he never sent a report to the prosecutor.

I have confirmed this. He never requested criminal action against the deputy. And there should have been, because he let him resign. He then went to another department. Sheriff Reich did not send a video to the new employer. And he had further assaulted behavior at the other department. Sheriff Reich had a deputy accused of rape, a horrible crime. What should have occurred is he should have immediately been put on administrative leave until it was determined that he was innocent or guilty.

This didn’t happen. That’s not normal police procedure. And he had a deputy who was addicted to opiates, very serious. He knew about this and he told the media, “Yeah, I knew about it for about four months.” Why wasn’t he taken off the road? Why was he left on the road with a gun and a badge? Why wasn’t he immediately called in and said, “You have a problem, and we’d like you to take a drug test, and we will put you in rehab, but we’re not going to leave you out on the road with an addiction.” That didn’t happen. I’m urging you to make a change this November, return Rick Jones as your sheriff.

In 2012, I was voted in as sheriff of Eaton County. I was reelected in 2016 as the sheriff of Eaton County. Throughout my eight years career as sheriff, we’ve done many things. Prior to me being sheriff, I was 25 years old and I retired out of the Ingham County Sheriff’s Department, where I held every position up to Detective Lieutenant. From there, I worked for the state of Michigan for 12 years as a director for Bureau of State Lottery. Then I ran for sheriff, because I’d seen all the problems that Eaton County had, and I wanted to make a difference. So, from there, I ran in and, like I said, for eight years, I’ve done a lot of things here in Eaton County that are good.

I don’t have the time to touch base on the false information Mr. Jones is saying. I urge people to go to my Facebook to look at my Fact Check Fridays, where I have already put in there the facts of these cases that Mr. Jones is referring to on these deputies. It’s pretty dangerous going to those accusations when he doesn’t have the facts, he does not have the facts. There’s a lot of things that go into play in that. But in my 33 years of law enforcement experience, I’ve done a lot of accomplishments. Mandatory deescalation training for all of our deputies since 2015. I later mandated every deputy receive additional training in escalation prevention and deescalation training. I’ve mandated a separate course on fair and impartial policing. Since I implemented these programs long before the current world events and recent government mandates, my deputies are now leaders in using their knowledge and communication skills, we have had much success in preventing the escalation of situations and deescalation of events on a daily basis.

I’ve mandated every deputy wear body-worn cameras since 2015. I mandated autism training. I have mandated cultural diversity training. In 2017, Eaton County’s Sheriff’s Department was instrumental in the development of our Lansing Region Crisis Intervention Team Training.

Both candidates were asked if they think systemic racism is a problem in policing today or if it’s just “bad apples” causing the probems?

Jones: Well, I can tell you that I have seen some horrible examples in the media. Kneeling on a man’s neck, I was taught not to do that in the ‘70s. It’s simply something that’s not done. I think we have a few bad apples out there that need to be removed. I think the vast majority of the police officers want to serve and protect and, unfortunately, they need the proper leadership to make sure that’s what they’re doing.

Reich: I have recognized that every department goes through a issue with a bad deputy or police officer. Eaton County was one of them. We’ve had some bad deputies that I have removed from that position. Other departments have had the same thing, whether it’s racial or not, sure, there are some deputies and I’m sure some officers that are racist. What we’ve seen with this police officer putting his knee on someone’s neck and eventually killing this individual was horrific, and that person should be charged with murder. This racial thing, it kind of hits home to me. I have two granddaughters who are biracial and it saddens me what they go through weekly, whether they’re in school or not. I want my deputies to be treated and treat others the same as I want my grandbabies to be treated.

Yes, there needs to be more cultural diversity training. I want new programs developed by the experts where we can implement those at the Eaton County Sheriff’s Office. So, I look forward to these changes in the next four years.