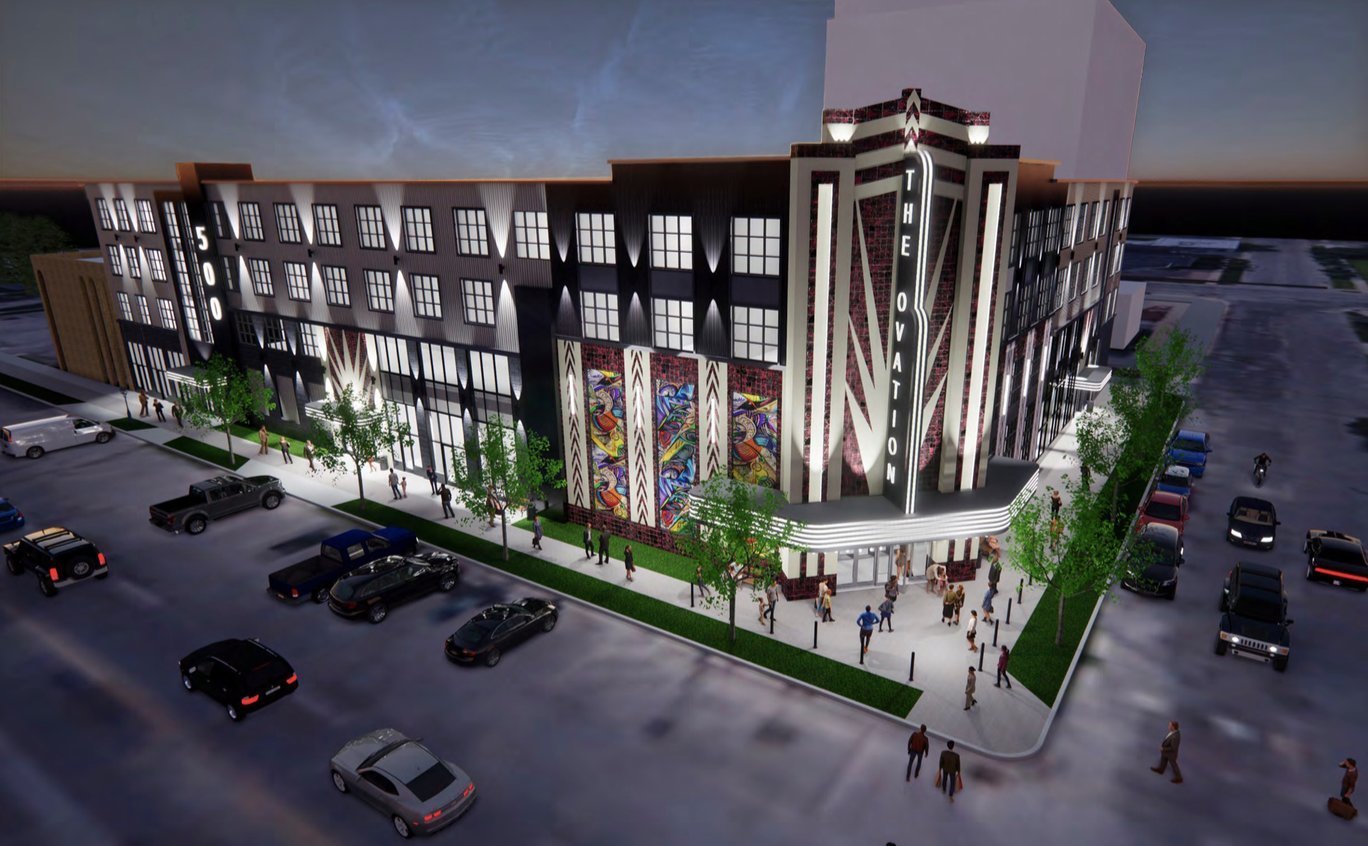 The proposal for The Ovation, at the corner of Washington Square and Lenawee Street unveiled Feb. 1 included the prospect of 40 affordable “live and work spaces” designed to attract working artists. However, due to building height regulations that significantly increase fire safety protocols and architectural requirements, those have been cut.
Posted Thursday, November 24, 2022 12:01 am
Todd Heywood

Apartments are out, but a rooftop restaurant and bar are in the latest plan for a three-story downtown performing arts center as the Lansing City Council appears poised to approve up to $20 million in bonds to build it.

The proposal for The Ovation, at the corner of Washington Square and Lenawee Street, that Mayor Andy Schor unveiled Feb. 1 included the prospect of 40 affordable “live and work spaces” designed to attract working artists. However, due to building height regulations that significantly increase fire safety protocols and architectural requirements, those have been cut, said Dominick Cochran, who is overseeing the project for the city. Had the project included the proposed apartments, which Cochran numbered at 68, the project would have cost an estimated $27 million. Without the apartments, the project has an estimated $17 million price tag.

“It’s just really complicated for the city to get into the housing business,” Cochran said. “But what we have, as a result of that, are an exciting bar and rooftop restaurant.”

Cochran described it as “hybrid. Half of the rooftop space will be heated and will work on all but the coldest days.”

He said they are conservatively estimating first-year revenues from the new eatery and bar at $150,000. “We can expect that to be probably quite a bit higher than that,” but the planning group is trying to be conservative.

The main hall will be on the first floor, with balconies and a “lobby/performance space” on floor two, he said.

The rooftop will include a large screen to show movies, he added.

He noted that the bar and restaurant will be open even when the venue does not have performances.

“That whole area is being activated with new housing,” he said. “The people who move there are going to want something to do in the evenings.”

City View Apartments, located in the former Lake Trust building next to the arts center site, just opened this month. This is the first phase of the housing project, which will be offering 55 studio, one- and two-bedroom apartments. Developers are continuing on that project to add additional housing. The former YMCA plot downtown has given rise to new apartments as well.

The Lansing City Council is likely to approve a proposal to authorize up to $20 million in bonds for construction when it meets Dec. 5.

The Council has tabled that resolution and two others for a month as members have pushed for more details on the project.

“I just need to make sure we’re not going to end up subsidizing this project like we do the Lansing Center, the stadium and Groesbeck Golf Course,” said Patricia Spitzley, an at-large member of Council. Joining Spitzley in questioning the proposal is Councilmember Carol Wood.

Council will consider three resolutions on Dec. 5, including the authorization to bond for up to $20 million. Another would accept the $5 million in Strategic Fund grant money from the Michigan Economic Development Corp., and a third resolution would create a quasi-public body to oversee the facility like the one that operates the Lansing Entertainment and Public Facilities Authority. Board members would be nominated by the mayor and subject to City Council approval

Cochran is the director the Lansing Public Media Center, which is playing a pivotal funding role in the arts center. He explained why the bonding was necessary.

“The MEDC money comes in tranches,” he said. “Bonds will allow us to do the work and then have the money released to us. When it’s all done and the doors open, the city will carry on its books about $6 million in bond debt. We know we have that covered with future PEG dollars.”

PEG is short for Public, Education and Governmental money, which comes from a franchise fee paid by cable providers to create public access programming. The city recently renegotiated its PEG agreements with AT&T, Metronet and Comcast. Past deals have been 10-year contracts, but the new contracts are for 20 years, delivering about $2.5 million a year in franchise fees. That money, Cochran said, will cover the bond debt.

“They are very supportive of this project,” Cochran said of the cable providers.

In addition to the PEG and MEDC money, Cochran said the city has put aside $2.5 million. The state has appropriated another $2 million for the project.

Cochran said the project is expecting another $750,000 in federal cash and up to $7 million in private naming rights income.

Cash from naming rights, along with additional initial private gifts during the fundraising, will go into the operational fund to be a fiduciary backstop preventing a need to rely on a city subsidy.

“That’s something that came out during the private fundraising endeavor. Nobody wanted to build something that would be a burden to the city in the future,” Cochran said.

Schor is onboard with the current plans.

“This is important and exciting for Lansing,” Schor said. “At the end of the day, the bonding will get us through the construction, and the plan has contingencies to fund the building operations in the event of an unforeseen crisis. In the worst-case scenario, the building can be sold to pay off any debt. Council is not under any obligation to fund a subsidy for anything, including this. They simply reject it during budget time.”

The main performance space will remain at a 2,000-person standing capacity, but a proposed black box theater has been scrapped for four smaller rooms. The large space could be partitioned off for professional touring shows with smaller audiences. Cochran said creating a performance space at the South Washington Office Complex would be less costly for community theaters to rent and use, and make more sense for them as well.

Peppermint Creek Theatre Co. did a trial performance in the SWOC this year with a production of Stephen Sondheim’s “Merrily We Roll Along.” The big room requires pipes and curtain sections to create a more intimate space but is functionally flexible enough to host theater performances in the evenings and conferences and lectures by day.

The new facility will focus on up-and-coming musical acts, as well as groups on the wane.

Cochran said a marketing study found that what Lansing was missing was “ an intersectional place like St. Andrews Hall,” referencing a popular 1,000-person performance venue in Detroit. “The fact is we have a major university and we’re a capital city with no venue like that — it’s pretty wild.”

The marketing study found students from MSU were willing to commute to Grand Rapids and Detroit for performances. While many in-person venues are still struggling to stand back up after the pandemic shutdown, Cochran said there is a “certain demographic” that is “ready to party,” creating “more demand, ironically, than before COVID.”

(Berl Schwartz contributed to this story.)