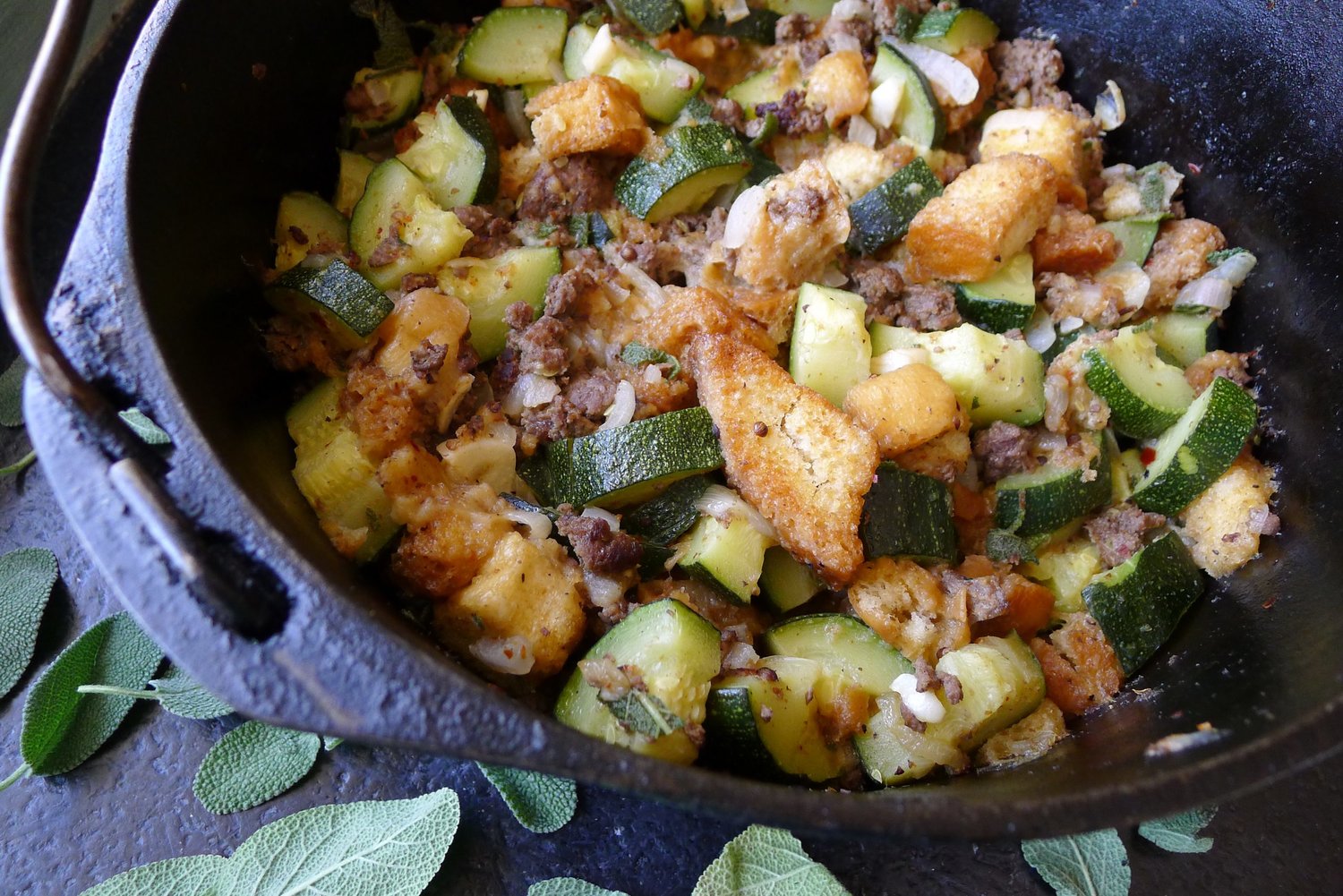 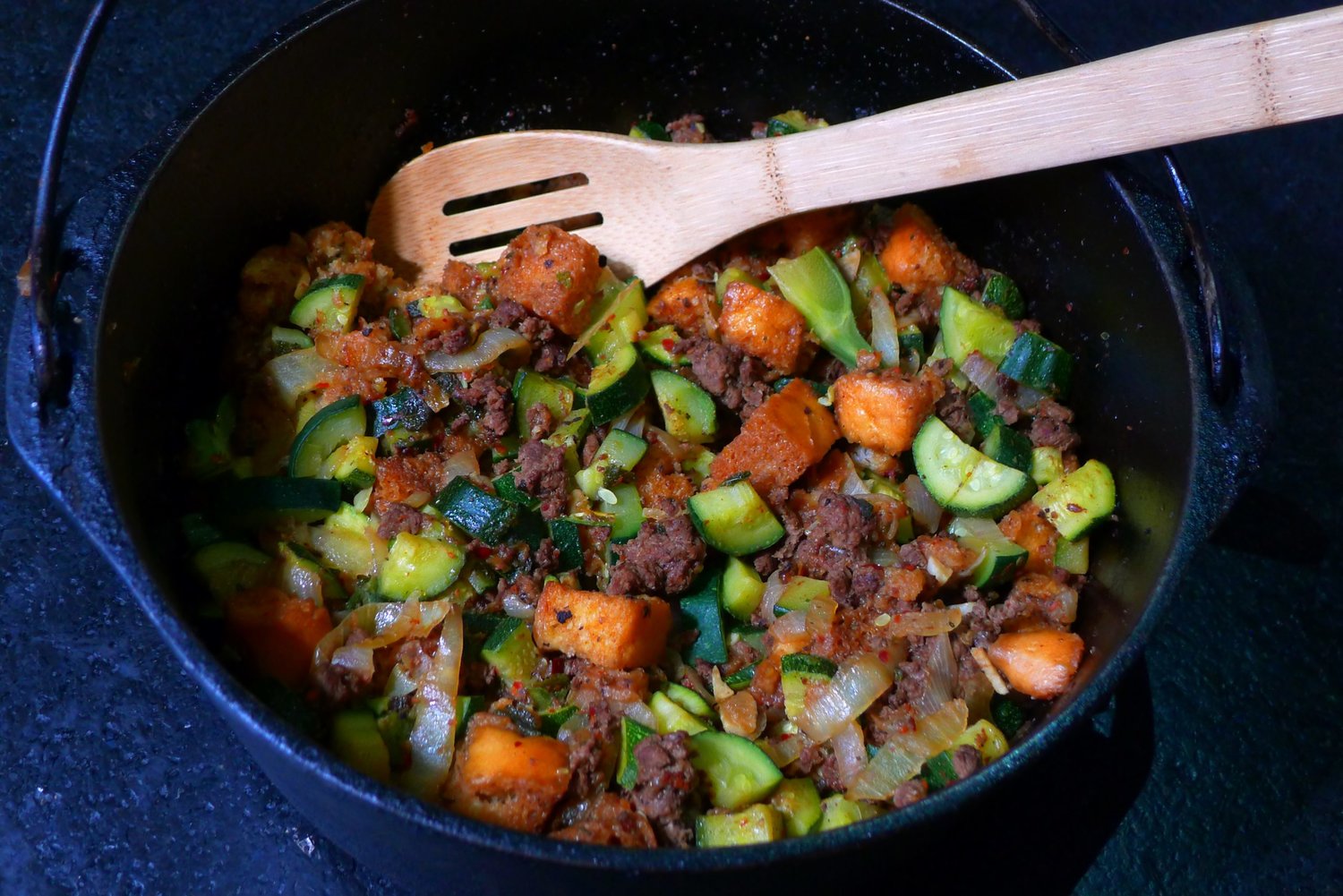 In front of an Agway store in Montpelier, Vermont, a sign announces “World’s Largest Zucchini Here.” The grower, store employee Ron Sholtz, told WCAX News Sept. 28 that his state record 115-pound specimen is currently the largest zucchini on planet Earth, according to an unnamed international body that keeps track of such things.

His green, warty cylinder sits massively on a sturdy, hay-strewn table, a reminder of the intense power of a zucchini plant — the same unstoppable growth force that fuels a zucchini’s takeover of your garden, quietly building dark submarines in the prickly undergrowth as your attention is distracted by the bounty of summer. By the time the zucchini is big enough to trip over, your options are limited. But unlike Mr. Sholtz, whose large conversation piece is, in the end, nothing but pig food, if you have a zucchini that is up to the size of a baseball bat, your big specimen can still find a little purpose in a loaf of zucchini bread.

To be clear, a large zucchini has less flavor, more bitterness, a tougher peel, and large woody seeds. You could feed a small city if you could only get someone to eat it. If.

Things being how they are, there is no shame in bailing on an overgrown zucchini. You owe nothing to each other. But if you have the freezer space, and a desire to bake zucchini bread, then bust out the kitchen grater and save that monstrosity in a form that could be of use down the road. Peel and seed your large zucchini until you are left with nothing but solid white flesh and grate it through the grater’s largest holes. (With zucchini smaller than a wine bottle you can skip the peeling and seeding.)

Add a half-teaspoon of salt for each pound of zucchini. Mix together, wait 15 minutes and then squeeze out as much water as you can, either in a colander or nut milk bag, and freeze the grated zucchini in an airtight freezer bag, with no air pockets and flat enough to stack neatly and space-efficiently in the freezer. That pound of zucchini will yield about a cup of grated product, ready to give body to your muffins, or perhaps a savory soup.

Meanwhile, the season of fresh zucchini isn’t over yet. At my friend Luci’s farm, October is zucchini stuffing month. Luci always seems to have a way to cook awkwardly large quantities of anything, and she invented this recipe during a power walk from field to kitchen.

“I was thinking about what to do with zucchinis, because we had so many, and what to make quickly, because I had like half an hour,” she recalls.

“What I really wanted was stuffed zucchini because it’s so yummy, but didn’t have time to bake it, much less stuff it. I always try to do one pot meals for lunch— I have a huge kettle. So I added the ingredients for stuffed zucchini and kind of stirred it around.”

Inside Out Stuffed Zucchini, as she originally called it, evolved to include sage and chicken stock and other stuffing flavorings, so it tastes like something that was cooked inside a bird for hours. It has that richness, even without any gravy.  The croutons are mushy but just chewy enough, the meat is dark and savory, the herbs are aromatic, and the zucchini melts into a juicy sauce that brings it all together. It might be nature’s most perfect food. At the very least, it’s a good warm up for a chilly day.

The guiding principle of this dish is it should taste like stuffing.  When in doubt, advance that principle. The sage, croutons, onions and chicken stock do their jobs, elevated by the zucchini and meat. Luci uses stale, hard bread that she keeps frozen for this purpose. I have been very happy with bagged croutons from the store.

Fry the meat in the oil in a heavy-bottomed pan until it reaches your desired shade of brown, stirring as necessary for even cooking. Add the onions, garlic and spices, and cook until the onions melt into oblivion.

Add the zucchini, croutons and butter and stir it all together really well. Add the stock and cover. Turn down to low and gently simmer until the stock is gone, about ten minutes. Let sit covered for ten minutes, then serve. Being stuffing, it goes with anything.