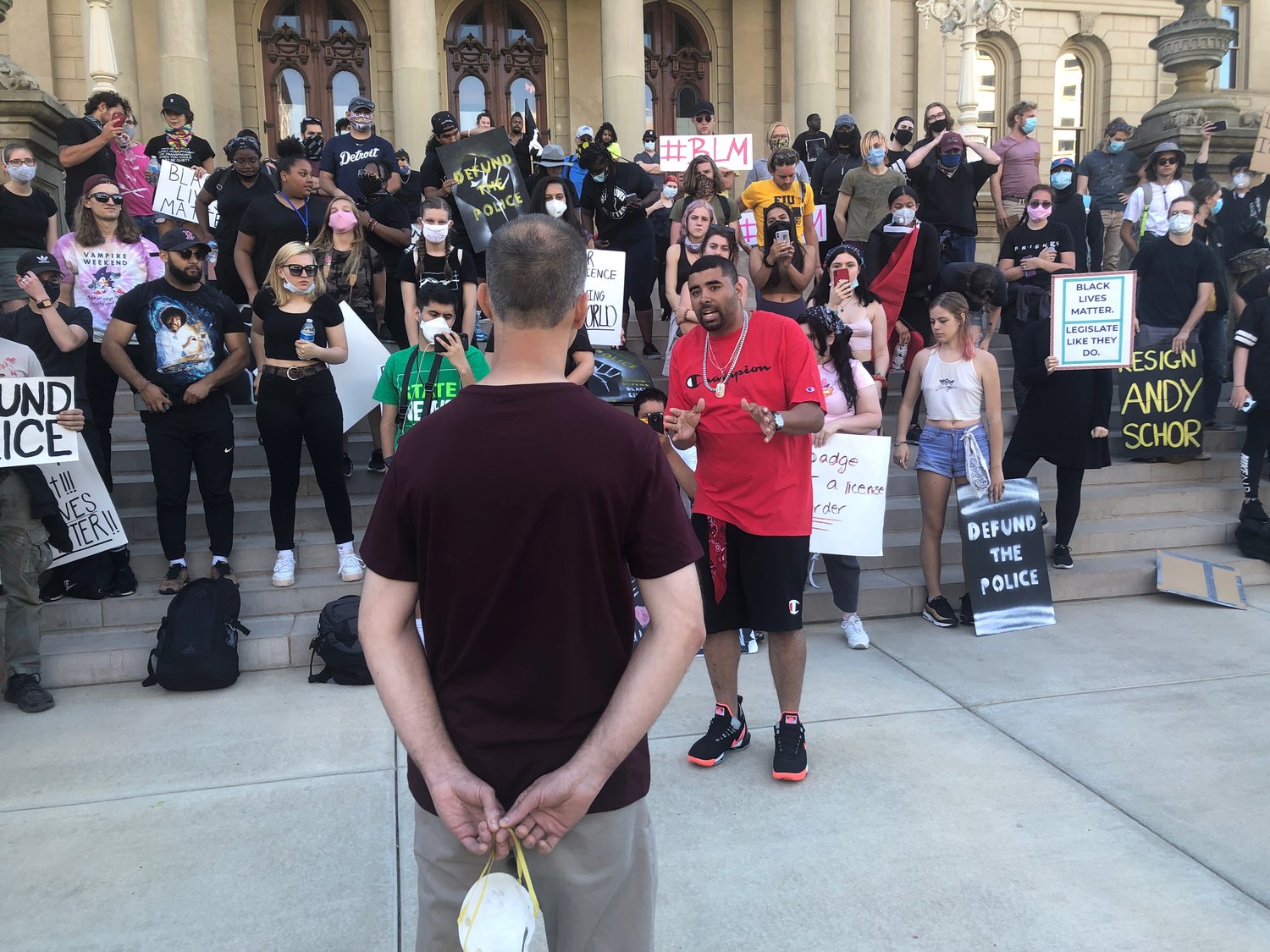 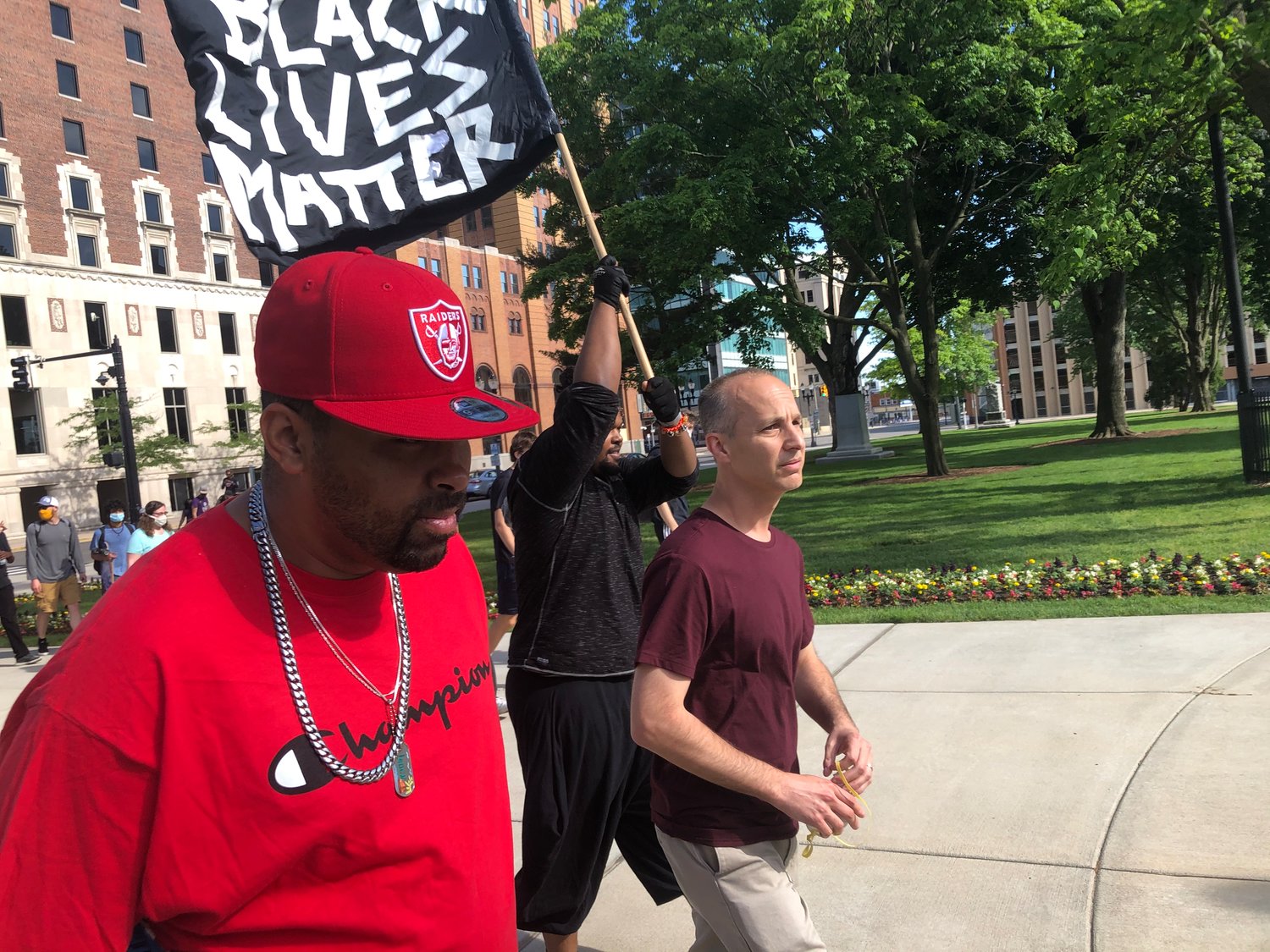 SUNDAY, June 7 — Lansing Mayor Andy Schor told protesters tonight he wants to cut the police budget by at least $100,000 in order to fund social equity priorities they are seeking.

“We’re going to look at the budgeting and at all the items you’ve been talking about,” Schor said, referring to the demands they had given him the night before. “I don’t have a specific number right now.”

Police spending for the new fiscal year, starting July 1, has already been cut $800,000 because of the city’s financial ills brought on by the pandemic.

Then protest leader Paul Birdsong dismissed him, saying Schor was giving “bullshit answers.” He told Schor he was done asking him questions.

Schor headed to his car. On the way, asked by City Pulse what he would spend the money on, he said:

“I’d like to put the $100,000 into a fund for organizations to use for equity, for my brother’s keep type issues, allow agencies within our city to utilize these dollars to make change.”

Schor said the Mayor’s Diversity and Inclusion Advisory Council is going to sponsor a town hall that he will be part of. “We’re going to come up with an action plan, taking all the recommendations provided to us. We have a lot of work to do.”

Schor said he does not know if he would seek a cut bigger than $100,000. “We have to have a conversation with the community, with City Council, with others, about our entire budget,” he said.

“I think we can find dollars in here to provide for a lot of these groups,” he added. “I started with a number. They asked me for a number, so I threw one out.”

Defunding is a national movement resulting from the police killing of George Floyd in Minneapolis. In New York City today, Mayor Bill de Blasio endorsed taking funds from his department to pay for programming to address racial inequality.

Schor surprised the protesters at the Capitol. He was waiting for them when they arrived for what was going to be a march to Schor’s house.

Last night, they did march there, where they presented Schor with their demands, introduced by Birdsong as, “We’re not asking, we’re telling.”

Before they left, Birdsong told Schor the protesters would gather at the Capitol at 4 p.m. today to head to his house. Instead, Schor came to them.

If he thought the protesters would be pleased to see him, however, he was mistaken.

“You see how the news tried to say that letting us use his bathroom made him a good guy?” Birdsong said, referring to Schor’s open invitation to protesters last night to use the bathrooms in his house.

“We’re still not done,” Birdsong said. “I’m not going to give anyone a chance to play me. I don’t trust him or no one anymore.

“You can’t just come here and expect us to stay quiet,” he went on.

Referring to a statement Schor made the night before, Birdsong said, “You said there’s already de-escalation training going on, that we already have non-bias training right now. But the trainings happening now are bullshit.”

Before things went south over the defunding amount, Schor told protesters he “struggled” with the decision to let the police use tear gas twice Sunday night to break up crowds after a car was burned and windows were broken by crowds downtown.

“My question really is how do you directly prevent someone from hurting someone else and destroying things?” Schor asked. “We don’t use rubber bullets in Lansing. We’re against police brutality. I don’t want the officers going in and causing something to happen. How do we do this better?”

Birdsong told the mayor: “You might think we’ll give you credit for showing up. We don’t care. We want to see changes.”

Once Schor had left, Birdsong announced that they would still march to Schor’s house.

An hour later, they were seated in the street and on the grass of the Country Club of Lansing across the street from Schor’s stone and wood home on the river side of Moores River Drive.

They serenaded Schor with a call for him to resign to the tune of “Na Na Hey Hey Kiss Him Goodbye,” by Steam:

Birdsong told City Pulse that on the march over, a white truck driven by a white man rammed a protester’s car near the intersection of Martin Luther King Jr. Boulevard and St. Joseph St.

“One of our guys who was armed popped out to stop him from ramming anyone else,” Birdsong said.

He said he told the protester to put the gun away and the driver to get back into his truck.

“He got to hooting and hollering. I told him to do what you want to do, ‘but I’m telling you get in your truck.’ He sat there shaking for a minute then hopped in his truck.”

Efforts to see if there was a police report were unsuccessful.

Before the protesters headed back to the Capitol to wrap up the night, Birdsong announced on a live Facebook feed that he addressed to the people of Lansing that some protesters were “legally armed to protect ourselves.”

“If you try to hit us with a car or jump out at us, you will be met with force.”

“You made think this is a Martin Luther King type of movement. I’d like to correct you about that. This is a Malcolm X type movement. We believe in the rights to defend ourselves.”

“All power to the people.”