How cat memes and French Impressionism overlap this month 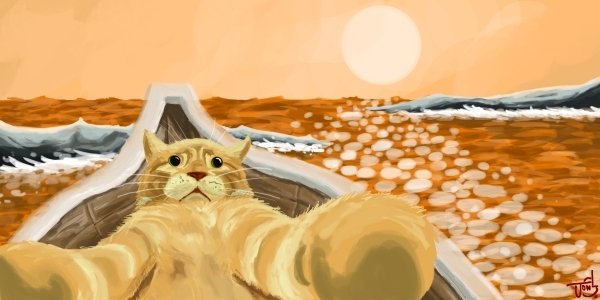 Posted Wednesday, August 6, 2014 12:00 am
Jonathan Griffith
An artist often gives away his surroundings through his art: The vast, rolling pastures of Constable’s Dedham Vale, the lush, liquid landscapes of Monet’s water lilies, the visual cacophony of Bosch’s … well, who really knows. So, given the array of animals that inhabit the paintings of Freshteh Parvizi’s new exhibit at East Lansing’s Mackerel Sky, one could easily assume she is entrenched with a veritable menagerie of creatures. But you know what they say about assumptions.

“I don’t even own a dog,” Parvizi said. Not that there’s anything wrong with that.

Her styles vary subtly from piece to piece as figures take baby steps away from realism and back again with all the work exploring color palettes right at home with the French classics of the 20th century.

Although incongruent, it’s obvious the pieces are all part of the same litter: One series of paintings contains flowers and birds, the next is all cats and flowers and then finally a pair of portraits contain a person and a cat. Parvizi denies any correlation — she said it’s all in the spirit of experimentation.

Parvizi earned a master’s degree in graphic design from Michigan State University when she moved to the states from Iran 27 years ago. Her background in graphic design aids her in digitally implementing flourishes into her work, which in turn inspires her to reach beyond the confines of her trade.

“Working in graphic design for so long has made me want to experiment outside the art form,” Parvizi said. “Now whenever I see things, I just want to paint it.”

So while the masters put their surroundings to canvas, whether they knew it or not, they passed down a visual history of their respective era. The MSU Museum debuted a new exhibit that explores how we’re all doing the same thing with “selfies,” and that photographic self-portraiture is not as new a trend as we may think it is.

“#me: From Silhouettes to Selfies” takes a look all the way back to culture’s first form of selfie to today’s. The exhibit says that it is estimated that nearly 1 trillion selfies will be taken this year alone. That’s a lot of narcissism.

The exhibit contains several pieces from the MSU historical collections including examples of daguerreotypy, one of the first photographic processes that captured images on a highly polished silver surface, and a look at the physiognotrace, an instrument that helped capture an individual’s silhouette.

Far removed from the selfie taking, social media obsessed culture of the 21st century, Saper Galleries’ new exhibit featuring the works of French painter Fabienne Delacroix. This exhibit concerns itself with a time that was less about keeping your eyes glued to the screen of your smartphone and more with keeping them trained on distant sailboats and sunsets.

“Its all about the time we wish we had,” said Saper Galleries owner Roy Saper.

Delacroix is the youngest daughter of famed 20th-century French painter Michel Delacroix, who was a practitioner of the Naif style of painting, a style that defied contemporary techniques and traditions. Where Fabienne Delacroix’s work is concerned, the apple didn’t fall far from the tree.

“Fabienne grew up at her father’s feet,” Saper said. “Painting is in her blood.”

While her father was known for painting a France he was well acquainted with — the Nazi-occupied wartime of his youth — Fabienne Delacroix, born in 1972, paints an era that predates her existence by several decades. In vibrant palettes, echoing Impressionistic techniques, she brings to life scenes from the Belle Epoque of pre-WWI France. A time of limited electricity whose leisurely activity was deliberately spent at a snail’s pace.

Scenes like “Le trios mats” and “Sous le pont” are effective in their ability to transport the viewer to another time with their loose brushwork. Furthermore, they convey an implied accuracy that makes the viewer wonder how Delacroix can articulate such lucid visions of the past onto canvas. Saper offers a simple insight on the secrets of Delacroix’s talent.

“She paints from the heart,” Saper said.

“Not what she thinks others want.”