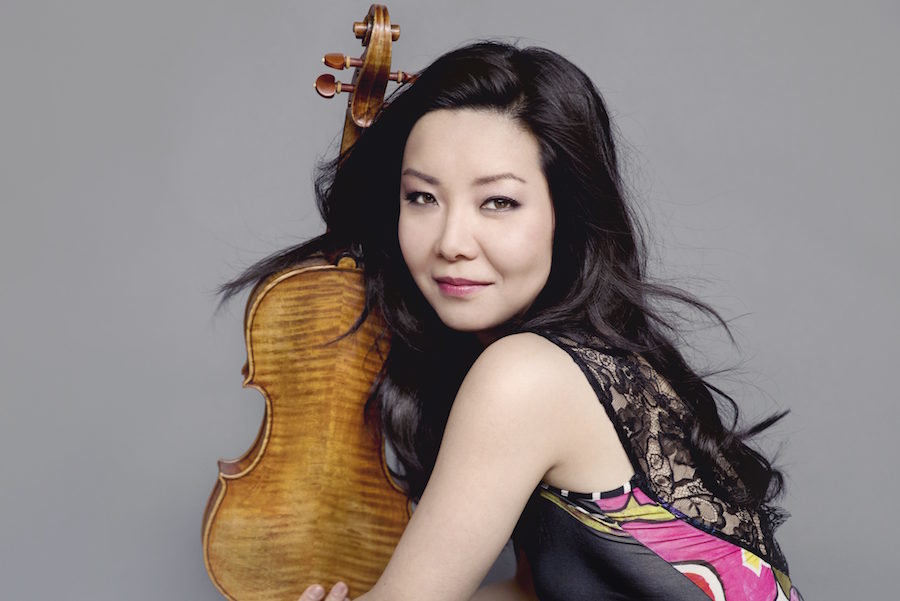 The usual symphony concert takes you to some splendid but familiar destinations. Saturday night, the Lansing Symphony was not serving up the usual.

Guest violinist Yi-Jia Susanne Hou played with a tone that was so ductile, so tender, so free of friction, it made the downiest peach fuzz seem like the unshaven chin of Popeye.

There were many levels to Hou’s musicianship, from her warm rapport with the audience to her technical prowess, but it was hard to get past her ravishing, silken tone. Was it ice or was it fire? Yes and yes. In the very highest register, where even Jascha Heifetz starts to summon thoughts of a dentist’s drill, Hou dared to linger, linger, linger, until the crystalline ring seemed to sublimate into pure thought.

She put her own stamp on the music from the first phrase, shaping and inflecting the melodies as if she were talking with you face to face, not delivering a graduate seminar on violin pyrotechnics — although she snuck that in as well.

The orchestra flexed a lot of muscle underneath Hou’s magic, grounding her lyrical flights in a stormy, Beethoven-ish landscape. It was a profoundly centered, focused performance that never drifted into idle delectation, as romantic idylls sometimes do.

For an encore, Hou spoke directly with the audience, hawking her latest CD and playing a few excerpts while the orchestra and maestro Timothy Muffitt patiently cooled their jets. The unusual epilogue poked a small pin in the preceding magic, but Hou did it with such earnest enthusiasm nobody seemed to mind.

What happened next was unusual on a whole new scale. Discovering a monumental symphony by Erich Wolfgang Korngold was like taking a trip to a spectacular national park that, for some reason, hardly anyone knows about.

Thanks to Muffitt’s bold programming and a masterful, pedal-to-the-metal performance, a rarely heard American masterpiece got a thrilling 53 minutes in the sun, right here in Lansing.

The symphony came out of shadows hard and cold, like a gun barrel, a two-note thwacking anchored by mallet percussion that quickly escalated into an existential storm. As the tension grew, principal flutist Richard Sherman floated a tender melody into the shadows, like a lost bird in a film noir alley.

Most national parks have at least one nexus of wonder that no place else can match — the geyser, the pink stone arch, the glacial lake. In this symphony, that was the volatile, kaleidoscopic second movement.

With no warning, massive blocks of sound emerged from the underlying strata of cellos and basses at sudden and surprising angles. A gorgeous brass chorale erupted from nowhere, disappeared and returned just when the memory of it began to fade. The most arresting feature in this geothermally active terrain was a weird, periodic meltdown in the strings that lasted only a couple of seconds but made my pelvis curl up into my neck every time. Muffitt and the orchestra nailed the split-second timing of all these episodes, with sudden changes in tempo and key of a degree of difficulty I can only imagine.

The second movement was the dazzler, but the heart of the symphony was its slow movement that followed, an epic elegy for President Franklin D. Roosevelt. You might wonder how purely orchestral music can paint a portrait so specific, and of course, it can’t, but that’s the beauty of it. The composer dedicated the symphony to FDR, but the cry was universal. Again and again, the orchestra returned to a noble, three-note signature theme, usually in the low strings and violins, suggesting a human soul moving through the storms, tragedies and loneliness of life. It was fascinating to hear how Korngold chiseled the flourishes from his more melodramatic film music style to craft a more serious and monumental, but no less affecting, musical language.

Muffitt excels at opening up long, epic scrolls like these and giving each granular detail its due. When the big moments came, you could feel the rumblings of the basses and brass cascade up from the floor through your legs and let your face bask in the sudden sunbursts of brass streaming over the crags. The entire symphony, especially the slow movement, was blessed with many eloquent solos, several of them from principal clarinetist Guy Yehuda.

After all the angst that came before, the last movement was almost too light in tone. It was an all-American boffo ending, buoyed by a zesty melody John Williams will surely steal some day — if he hasn’t already. But, that stomp of triumph turned out to be a familiar friend — the fragile, bird-in-the-alley solo from the very first movement, come back to roost in the sun.