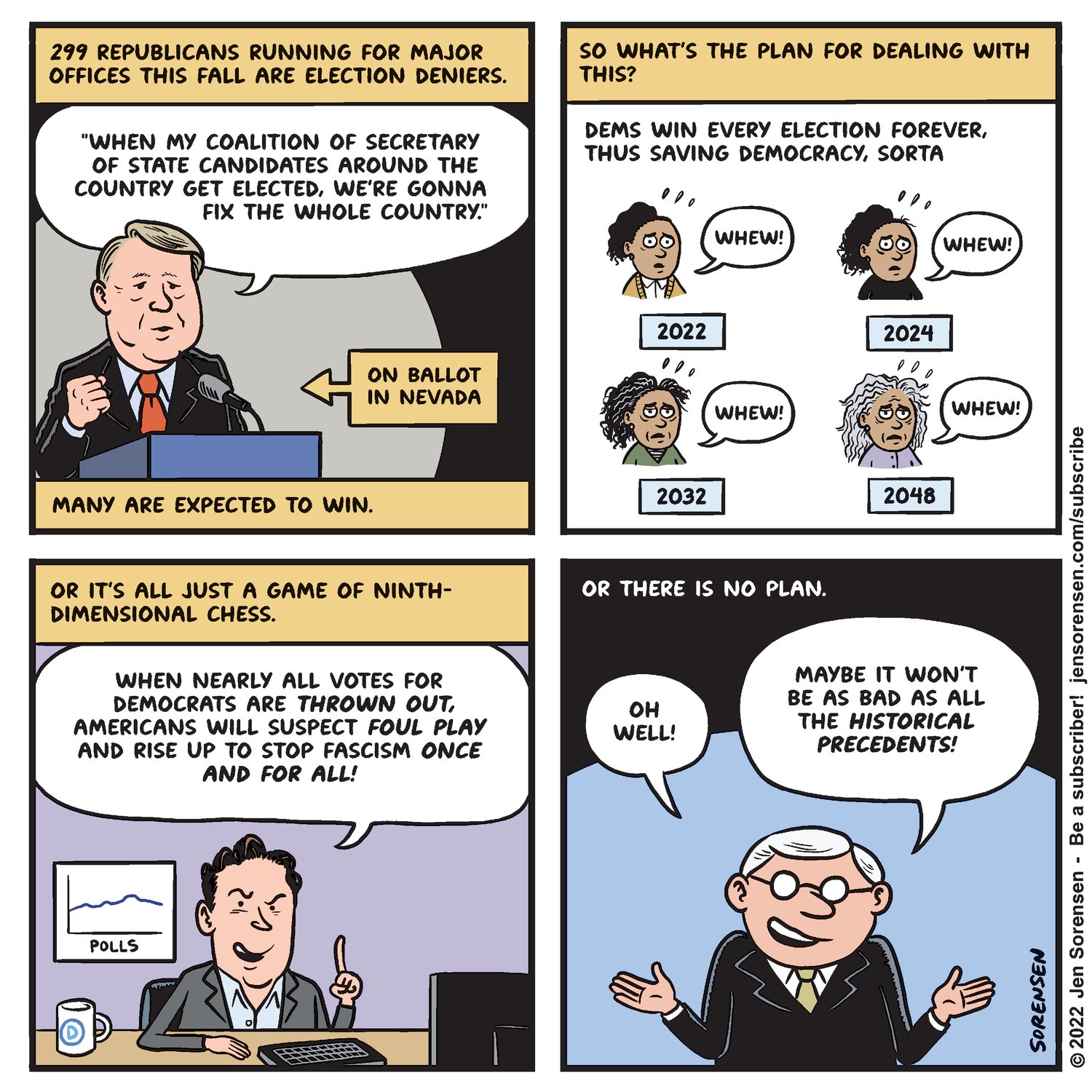 To be kind, Republicans haven’t been running the most competitive campaigns at their top of the ticket this year. Their gubernatorial candidate is sinking. A vast majority of voters have no idea who the R’s are running for secretary of state or attorney general.

The same can’t be said for Congress.

Very high on their blue-to-red list is our new mid-Michigan 7th Congressional District.

They feel U.S. Rep. Elissa Slotkin has led a charmed life. She won twice in a district Donald Trump won in 2020. She lost her Oakland County home base during redistricting. She moved into this new district, even though she’s represented Lansing for four years. She’s facing an elected official and family man who flies military helicopters in his free time.

For Republicans, there’s no better time than the present to dim Slotkin’s rising star.

We can’t let that happen.

Putting aside the disturbing vision of Rep. Kevin McCarthy handling the gavel for a moment, our Lansing region is better served and represented with Slotkin as our member of Congress.

Whether it’s putting a constituent affairs office back in Lansing, being an active member of the Problem Solvers Caucus or just being present in the goings-on of our Capital region, Slotkin is everything you’d want a member of Congress to be.

Her office is responsive. She’s engaged with what’s happening in Michigan and Washington. Her positions, whether you agree with them or not, are always reasoned. She can give an impassioned argument, as she showed at the WLNS debate when she pinned down her opponent on issues probably more times than the moderator did.

As she showed at Oakland University when she announced she’d vote for Trump’s impeachment, she doesn’t cower in face of confrontation.

She regularly makes herself available to the press, which we like. It shows she makes public accessibility a priority and she’s willing to be held accountable for her decisions.

We can’t say the same for her Republican opponent, who has gone into hiding on a few occasions when contacted by City Pulse. Tom Barrett apparently prefers to talk only to people with whom he agrees. Regardless, we’d oppose him on issues, but another strike against him is his disrespect for constituents who differ with him.

Slotkin is a Democrat, which we like, but she doesn’t let her party label drive her politics or decision making.

She boldly told “Meet the Press” this weekend that the Democratic Party needs new blood in 2024 as opposed to giving President Biden a bobblehead nod.

Instead of an automatic amen to forgiving $10,000 of college debt, Slotkin called it for what it is: a “Band-aid” of an answer to the much deeper problem of higher education affordability.

She only supported the admittedly polarizing Nancy Pelosi for House speaker after all other alternatives were exhausted.

That said, Slotkin has strong principles that line up with where most Democrats land on the issues.

She supports women’s reproductive freedoms. She understands economic incentives are, at times, needed to land good-paying jobs for our region. She sees the transition away from gas-powered engines to electric vehicles as being globally necessary and something Michigan should be a leader in.

She makes health care — reducing the cost of prescription drugs and insulin, in particular — a high priority as evident by her vote in favor of the Inflation Reduction Act.

She openly supports making sure mega-corporations such as Amazon and their $54 billion in annual profits pay their fair share in taxes. It took her opponent a couple of direct questions to concede the same.

She doesn’t believe the 2020 election was “stolen,” a belief so basic that it’s startling we even need to bring it up as a political issue. But lo and behold, her opponent inexplicably had a hard time reciting the same belief during their last debate.

Not only that, he believes the congressional certification of the Electoral College vote in 2020 necessitated floor debate, as if spouting conspiracy theories are worthy of the hallowed U.S. House chambers. Respecting that the election officials of Pennsylvania and Arizona know how to count their votes without proof of misfeasance or malfeasance is a perfunctory part of the job.

Slotkin’s opponent also is not in favor of two loving individuals of the same gender getting married to one another or legalized marijuana, which are almost immediate disqualifiers for us.

With abortion, we all saw that what the courts giveth, the courts can take away. We need lawmakers on both the federal and state level to enshrine same-sex marriage into law now.

As for marijuana, we’re well past making marijuana this boogeyman that’s responsible for societal ills. Can we finally legalize it nationally, so our pot shops don’t have to deal in cash and can bank like everybody else?

Finally, we feel obligated to address this canard Republicans are using against Slotkin about renting local business executive Jerry Hollister’s place until after the election. This is really grasping at straws. We understand why this mutually beneficial transaction between her and a government relationship professionally would raise eyebrows. But to conclude something nefarious is going on requires presumptions and imagination, a pair of traits Republicans seem to be gifted with these days.

For us, it’s hard to picture a better member of Congress for Lansing than Elissa Slotkin, which is why we enthusiastically endorse her for a third term.

Have something to say about a local issue or an item that appeared in our pages?  Now you have two ways to sound off:

Write a letter to the editor.

Contact Berl Schwartz for more information: publisher@lansingcitypulse.com or (517) 999-5061. (Please include your name, address and telephone number so we can reach you. Keep letters to 250 words or fewer. City Pulse reserves the right to edit letters and columns.)