Flash in the Pan: Squash spaghetti 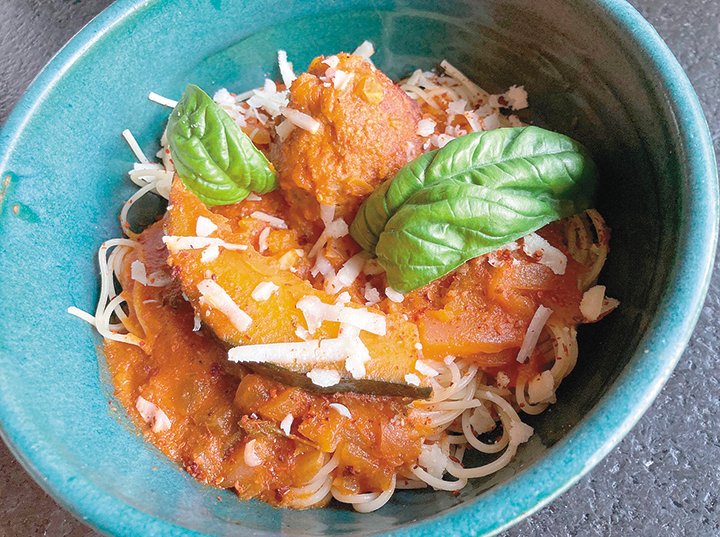 Spaghetti and meatballs infused with a helping of squash is a delicious pasta suitable for autumn.
Ari LeVaux
Posted Thursday, October 21, 2021 12:00 am
ARI LeVAUX

This grumpy farmer who lives in the foothills south of town brings the most amazing produce to market. I call him Mr. Sunshine. His blustery attitude practically dares market-goers to buy his vegetables each Saturday. But his regular customers chuckle at the vibes and focus on the produce, which is usually much more inviting than his attitude and so cheap that the other farmers grumble. Everyone, customers and grumblers alike, marvels at his productivity, and wonders how it is that he can coax such a gorgeous bounty from the Earth, all by himself.

The only people whom Mr. Sunshine appears to tolerate are my two boys, eight and 11. He showers them with books, toys and junk food while he ignores his actual paying customers. I often leave the boys in this free childcare area while I do the rounds, gathering the few items I can’t get from Mr. Sunshine himself.

Toward the end of a recent market, Mr. Sunshine made a business proposition to the boys. He’d grown more winter squash than he could handle. Amazingly, he invited them to his secret magic farm to come harvest a truckload of squash. The boys would sell it in front of our house at a homemade farm stand, where passersby could self-serve. He and the boys split the proceeds 50/25/25. Being their driver, Mr. Sunshine grudgingly invited me too — after I swore that I would not take photos.

The farm was smaller than I had expected and dense with bounty. Since the first frost had already hit, and a harder frost was imminent, the squash were in danger of rotting if they weren’t collected immediately. And there was more squash than even Mr. Sunshine could sell in the last few blustery markets of autumn.

The boys and I hit the squash patch, where we loaded boxes of the colorful, hard-shelled fruits. They have whimsical names: “Butter Baby” butternuts, “Bonbon” buttercups, “Jester” delicatas and a new breed of red kuri squash called Steph Kuri. That’s right, Steph Kuri. Available now at my family farm stand.

We also filled boxes of spaghetti squash, which I don’t like. I don’t like the flavor or the stringiness. But a lot of people do because they sure sell. But aside from the novelty, spaghetti squash is just not that useful. It’s like a Weird Al Yankovic song that’s funny once but hardly something you want to rock out to every day. And we loaded many, many varieties of kabocha, including Winter Sweet, Speckled Hound, Speckled Pup and Sunshine, which is many people’s favorite kabocha squash.

Picking, packing and even selling those squash went smoothly. There are wads of cash all over the house and squash seeds all over the kitchen. But getting my own kids to eat the squash wasn’t quite as easy.

With just plain butter, squash can quickly grow old. Add some maple syrup and vanilla and it will never get old, but it will feel like cheating. Squash is already on the edge of being cloyingly sweet, and I’ve got little interest in pushing further in that direction — unless, of course, we are talking about pumpkin pie, which I cannot resist.

But savory squash is tricky because of that sweetness, or at least it seems like it should be tricky. But the truth is you can put squash in almost anything and get away with it. The other week, I added some leftover, very soft baked buttercup to a spaghetti sauce. It fell apart and basically disappeared into the marinara, causing it to thicken. The children gobbled it up without even noticing the squash.

A few days later I made squash pasta again, but this time I briefly steamed the Winter Sweet kabocha. It wasn’t as soft, and you could see the slices in the marinara. Again, the children wolfed it down. I did too. I may not be a fan of spaghetti squash, but sign me up for squash spaghetti sauce.

With a heavy knife, carefully cut the squash into quarters. Scoop out the seeds and steam it for about 15 minutes, until it gets soft but not mushy. When the squash is done, heat the pasta water.

While the pasta water heats, fry the sausage or meatballs in the oil on medium heat. When nicely browned add the onions and wine. When the onions are translucent add about a half-pound of the squash, each quarter having been cut into slices.  Add the marinara, along with a cup of pasta water and simmer for about 10 minutes until the squash is fully cooked. But don’t let it get mushy!

When the noodles are done, toss them in olive oil and garlic. Stir these dressed noodles into the sauce, garnish with shredded cheese and serve.