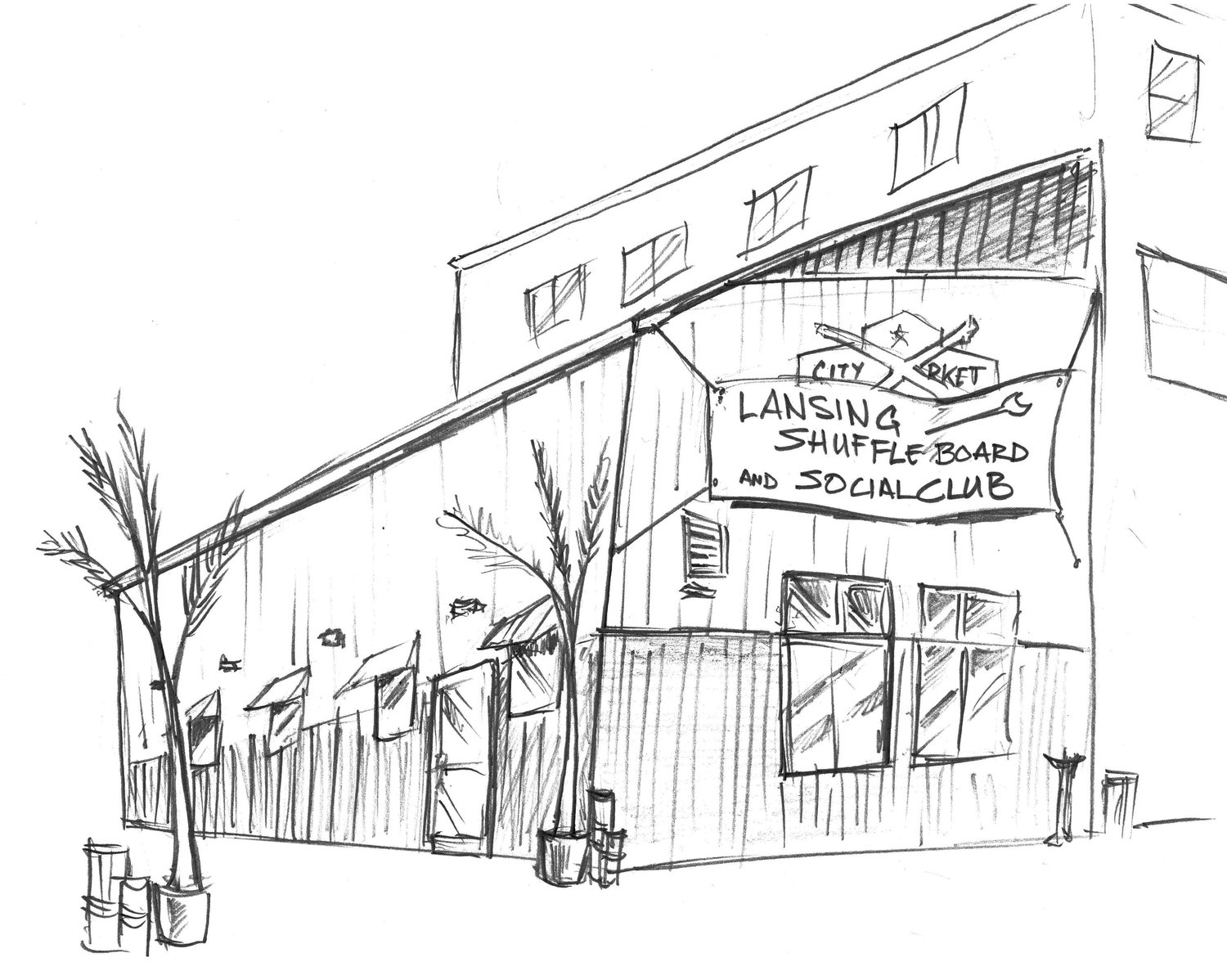 Last week Mayor Andy Schor announced his intent to open up a new chapter in the storied history of the Lansing City Market. Only it won’t be a farmers market. Schor and the city’s development partner, Detroit Rising Development, aim to transform the vacant structure on the downtown riverfront into a shuffleboard social club with food vendors, a bar and other community-oriented activities.

The plan was initially met with reactions ranging from guffaws and skepticism to curiosity and excitement. Shuffleboard? Really? Long viewed as a popular recreational pastime at Florida retirement communities, shuffleboard is evidently gaining traction with an entirely new and much younger demographic. St. Petersburg, Florida, is home to an historic shuffleboard club that reportedly attracts people of all ages, including trendy hipsters and young families. In recent years shuffleboard clubs have opened in New York City and Chicago, the latter featuring rotating food trucks and bars serving tropical-themed adult beverages. Shuffleboard, it seems, is actually a thing.

It’s an intriguing concept that could well be a good fit for Lansing’s moribund former city market building. As described by the city and developers, the combination of family-friendly recreation, food and alcohol may well be the highest and best use for the property. It has a good chance to draw more people to the downtown riverfront and even create a community of sorts for a new generation of shuffleboard aficionados.

A potential sticking point for the deal is found in the terms Mayor Schor negotiated with the developers. Under the agreement, which the City Council will be asked to approve or reject, the city’s annual rental income will start out at just $24,000 per year, potentially increasing to $64,000 annually when the deal is fully realized 40 years down the road. By comparison, the now defunct Waterfront Bar & Grill paid the city more than $70,000 annually for less than half of the 11,000-square-foot building. Lansing officials say the deal will actually save the city money by eliminating the need to subsidize the facility to the tune of $80,000 a year. The agreement also references the developers’ intent to seek a brownfield incentive, which may raise a few hackles when the Council takes up the matter.

The city will also allocate 25 parking spaces to the facility with additional spaces available for a fee. Convenient parking near the former city market building has always been a sticky wicket for city planners and customers. When it is financially feasible, we think it makes sense to build a single-level parking deck on top of one or both of the surface lots immediately behind the Lansing Center. A parking deck would provide hundreds of covered spaces that would benefit not only the new shuffleboard venture, but also the wildly popular riverfront kayaking business and other amenities in the newly enhanced Rotary Park. To tie it all together, the city should reengineer the landscape and walkways between the front entrance of the market building, the Lansing Center and the riverbank for ease of access and walkability.

We won’t belabor the convoluted and controversial history of the Lansing City Market. Our focus is looking forward, but in our hearts we would still support a plan to return the facility to its historic roots as a farmers market. We acknowledge the unavoidable reality that such a venture would require a substantial subsidy from the city to make it work, which is unlikely in light of the looming decimation of the city budget due to the COVID pandemic. While it’s not a new idea, we still believe the city could further enhance the downtown riverfront — and scratch the itch of those who want to see a farmers market in the heart of the city — by hosting outdoor farmers markets fashioned after the successful events held twice each summer on the grounds of the State Capitol. The riverfront promenade, the City Market plaza and the outdoor concourse adjacent to the Lansing Center could easily be transformed into a farmers market.

It still confounds us that Michigan’s capital city has been incapable of creating and sustaining a viable farmers market in the downtown core. Old-timers point nostalgically to the historic City Market that thrived during the downtown’s heyday in the ‘50s and ‘60s. Yet the market for fresh produce was changing long before the old market building was finally demolished, thanks to the rise of big box retailers with vast produce sections and the proliferation of neighborhood farm markets that serve the same fresh produce-seeking customer base. Add to the mix the uncomfortable truth that no one — neither the city nor the market’s former vendors — made a serious commitment to making it work. The new structure failed as a farmers market because it was more of the same, just in fancier digs.

The rule for successful urban farmers markets appears to be go big or go home. In Flint, more than $30 million in public and private investment was poured into a Health and Wellness Corridor that included 40,000 square feet for the Flint Farmers’ Market and an additional 30,000 square feet of warehouse space. The warehouse alone is three times larger than the Lansing City Market building. The Flint market also features more than 50 vendors offering barbeque, sushi, chocolate and more. The operating costs for the market are heavily subsidized, including a $150,000 annual contribution from the Mott Foundation.

Sadly, we think the opportunity to build and sustain an urban city market in Lansing comparable to the one in Flint has passed. Based on what we know thus far, we’re happy to embrace the shuffleboard social club concept as the next best idea and encourage City Council to approve the deal.