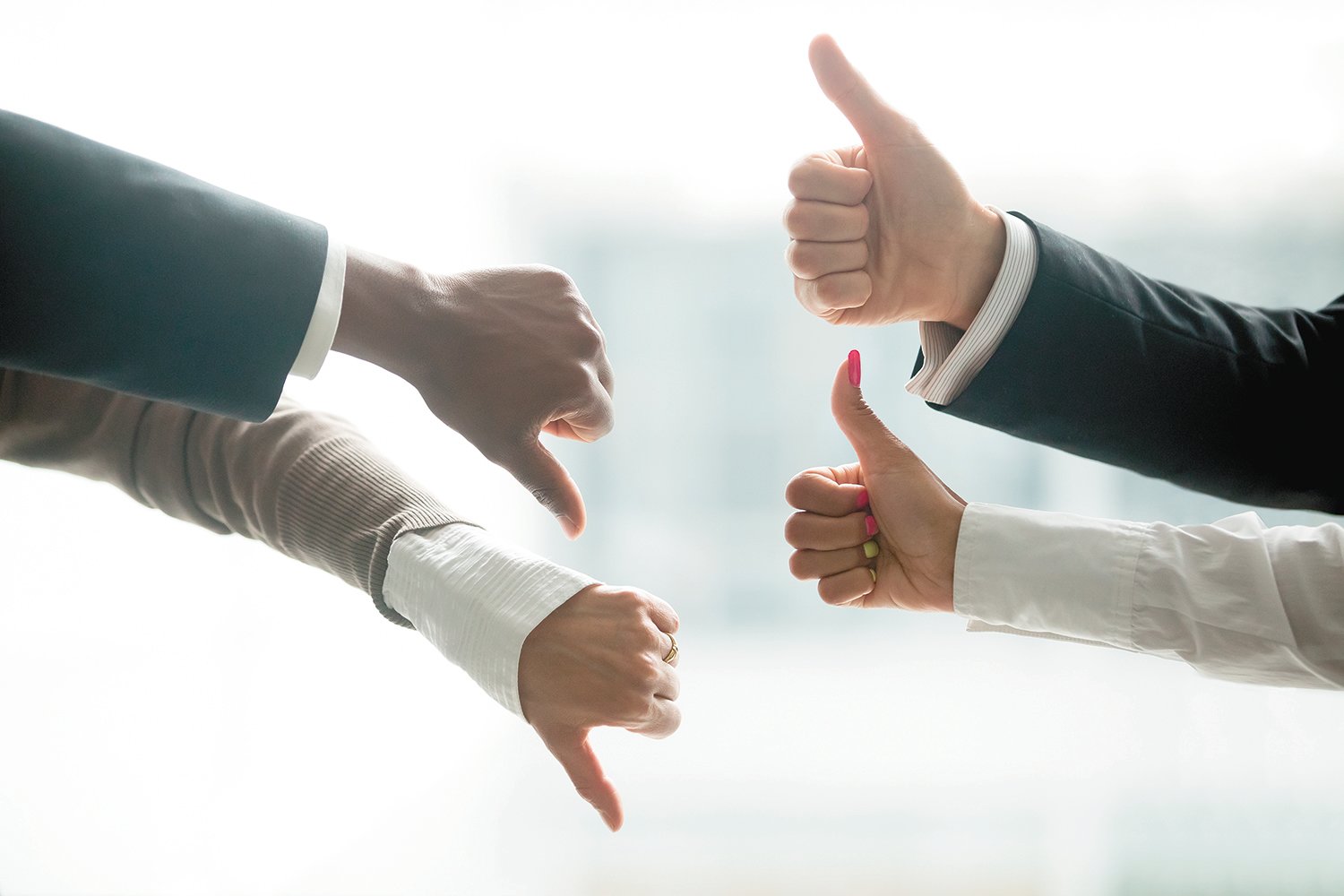 Hands of diverse business people showing thumbs up and down, like versus dislike gesture, positive negative feedback, yes and no opposition voting, confrontation disagreement at negotiations concept
Courtesy
Posted Wednesday, June 23, 2021 12:00 am
Staff

Having apparently learned nothing from the last election, Republicans in the Michigan Legislature continue to push the false Trumpian narrative that the election was stolen amid widespread voter fraud. To “fix” this imaginary problem, they’ve introduced a ridiculous package of 39 bills that are explicitly designed to frustrate the ability of voters to exercise their electoral franchise. One of the bills would have required making a copy of your photo ID and sending it in with your absentee ballot. That bit of nonsense has since been watered down, but the intent is clear: disenfranchising as many voters as possible, especially if they vote by absentee ballot and are from predominantly Democratic areas with a high proportion of minority voters. Should lawmakers get enough votes to send these malformed voter suppression bills to the governor, we expect she will veto them without hesitation.

Lansing developer Pat Gillespie and his team have almost single-handedly changed the face of downtown Lansing, from colorful apartments that add residential density to a new downtown grocery store and hotel. While we appreciate Gillespie’s passion and vision for improving his hometown, color us disappointed with his plans for one of downtown’s coolest buildings, the old Clara’s Restaurant (and former train station) on Michigan Avenue. The building has been idle since the legendary Lansing eatery shuttered in 2016. Gillespie recently announced plans to turn the iconic structure into a Starbucks. And office space. We understand that not every hit can be a home run, but we hoped for a more creative reuse worthy of the historical character of the place. Will it be successful? Probably. We’re still going to consider it a missed opportunity to do something really cool and transformational.

What’s next for Sears?

Gillespie also owns the defunct Sears property in Frandor. We’re heartened to see that he’s casting a wide net and thinking outside the box for what might take the place of the failed retailer. The property represents a huge opportunity to do something creative with the space, adding new dimensions to an area that is already undergoing a massive transformation with the Red Cedar development across the street. Gillespie has hired a top firm to help envision the future of the property, and he’s looking for tenants who don’t already have a presence in the Lansing market. Given the massive footprint of the site, we think a Trader Joe’s or an Ikea would be a welcome addition to the city’s retail landscape. Even more compelling would be a year-round Michigan Farm Market, wherein the state partners with Lansing to showcase and promote Michigan’s agricultural industry and provide greater access to fresh, healthy food. The market could be combined with a big city-style food court that encourages entrepreneurship and creates a new social hub for nearby residents.

Kudos to Joan Nelson, long-time executive director of the Allen Neighborhood Center, for her relentless drive and dedication to building a stronger community on Lansing’s East Side. Joan was recently honored by the Lansing Regional Chamber of Commerce for her visionary and impactful leadership. Now she’s leading a major apartments and retail construction project at ANC’s Kalamazoo Street headquarters that will resurrect the East Lansing Food Co-op as the Eastside Lansing Food Co-op. It’s a huge win for Lansing and for the neighborhoods surrounding ANC. Keep up the great work, Joan!

One of the unfortunate upshots of the COVID-19 pandemic is massive vacancies in downtown Lansing office space, thanks to thousands of state employees working from home. Word is that not all of them will return to their offices, even when the coast is clear, representing a potentially devastating blow to the economic vitality of Lansing’s downtown. We note that the Michigan Constitution designates Lansing as the seat of state government. We believe that means the state should locate as many of its offices as practicable within the borders of the Capital City. It’s not just the right thing to do, it should be viewed as a key component of an actual urban strategy that seeks to strengthen Lansing’s downtown business district. Rather than disinvesting in downtown Lansing, we think the state should be getting out of leased space in Meridian Township and Delta Township. State departments and agencies like LARA and the Michigan Public Service Commission are now located around the periphery of the city. Bring them downtown.

Lansing’s Community Foundation recently unveiled plans for a universally accessible destination playground for children with disabilities at Adado Riverfront Park on the west bank of the Grand River. The concept is sound and the preliminary renderings are compelling, but Scott Keith, the director of the Lansing Entertainment & Public Facilities Authority, has raised concerns about inadequate on-site parking and taking away green space that supports large community events like Common Ground. We support coming up with better use of what could be Lansing’s Central Park, but we think it might be better to locate the proposed playground in a more central part of the city, perhaps Francis Park, or Benjamin Davis Park on the city’s south side, which would make it far more convenient and accessible to residents from all corners of the city.