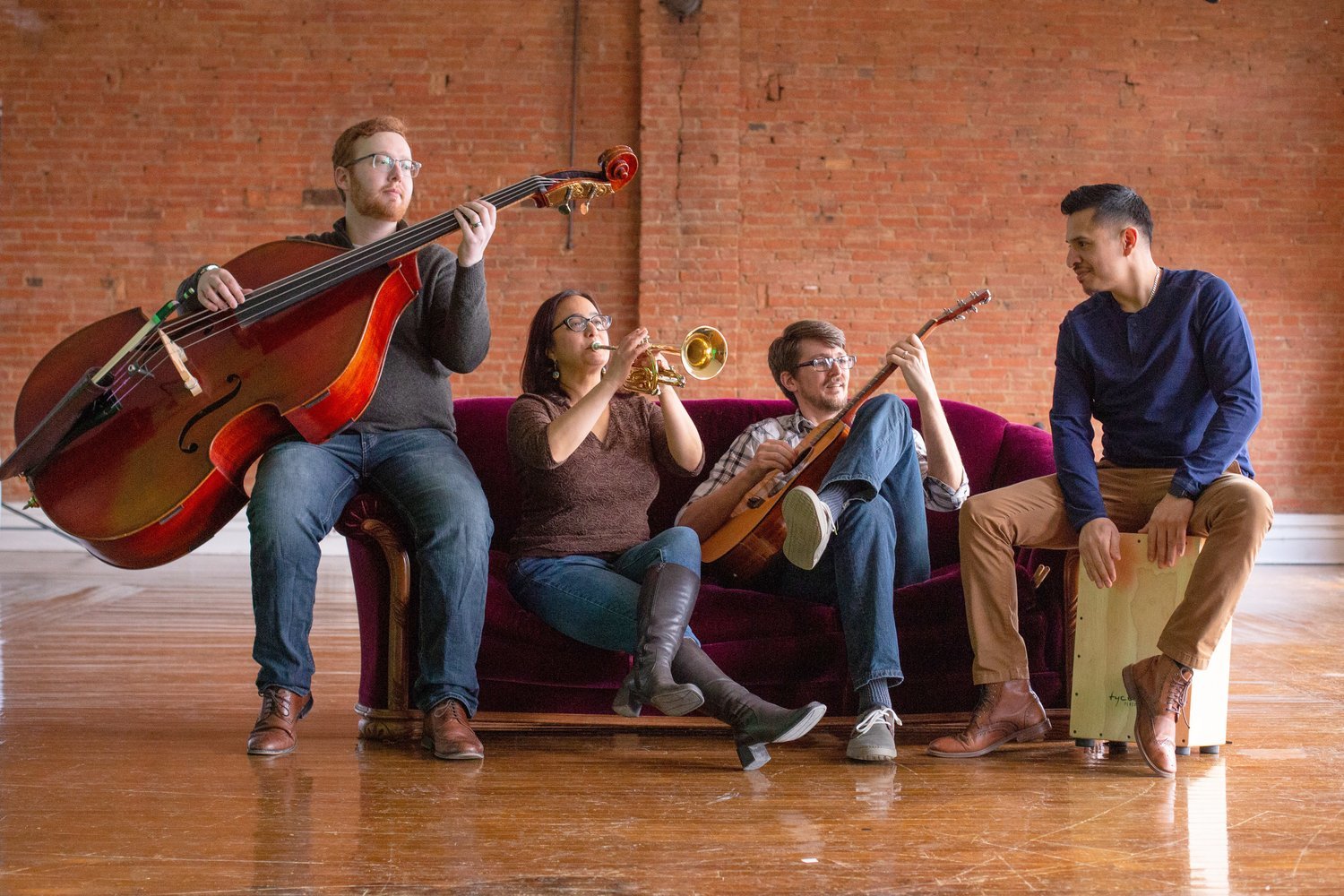 Fresh off its win in City Pulse’s Top of the Town contest for Best Folk Artist/Band, The Dangling Participles will release its sophomore album, “One More Drop,” Friday, Dec. 2, at UrbanBeat in Old Town. The feel-good, tightly-produced LP fuses indie-folk, jazz, Americana and neo-soul with the group’s signature harmonies.

Band members Austin Kaufmann (guitars, harmonica, vocals) and Tamiko Rothhorn (cornet, ukulele, vocals) caught up with City Pulse about what they — and fellow members Tim Patterson (bass, piano, vocals) and Dan Moreno (drums) — have been up to.

How’d the band first get together?

Austin Kaufmann: The original trio of The Dangling Participles all worked as ESL (English as a second language) instructors at Michigan State University’s English Language Center, which inspired the name when the group formed in 2015. Austin is now the sole English teacher in the current arrangement of The Dangling Participles, but the name has stuck. Tamiko joined in 2016, and Tim came on board in 2017, with drummer Dan Moreno shortly afterward. Tamiko, Tim and Austin all met playing in the folk and jazz bands at the Unitarian Universalist Church of Greater Lansing, and Dan was introduced to the band when he grabbed a cajón and sat in with them at an open mic.

It was a fun and easy transition to start playing together regularly. The four of us have been playing together ever since. Dan and Tamiko are Lansing-area natives, while Tim and Austin came to the area because of the university. Tim earned his Master of Arts in music composition at MSU, and Austin still works as an English instructor.

How would you describe the band’s sound to someone who’s never heard you?

Austin: The core of our identity and sound is less about genre and more about the dynamic of our alternating male and female lead vocals, our duets and harmonies. We’re not virtuosos on our instruments, but Tamiko especially has some serious pipes, and our vocals are special. Throw Tim’s third vocal part in there, and it’s goosebumps.

Tamiko Rothhorn: I usually tell people that we have an Americana-folk-jazzy-blues-pop-soulful sound. As Austin mentioned, our songwriting and arrangement style is eclectic, and so is our choice of covers, ranging from Adele to Of Monsters and Men to Brandi Carlile, Johnny Cash and Janis Joplin, to name a few. My goal for live shows is to have people feel the music, not just hear it. If we can find the soul of the song and communicate that to our listeners, then I think they will enjoy their live music experience even more. That is one of the big reasons to attend a live show. Austin and I play off of each other’s energy, and people consistently comment on how our on-stage connection makes us a fun group to watch.

Are there any songwriting processes the band tends to follow?

Tamiko: When gathering ideas for songs, I’ll hear something on the radio, a quote or passage from a book I am reading or a horoscope from City Pulse. The song “Moon Garden” was inspired by a City Pulse horoscope. Other ideas come from personal experiences that move me. I have about 200 to 300 recordings of lyrical snippets, melodies and chord progressions that I record on my cell phone whenever something strikes me as a potential nugget of song gold.

Then, I’ll get a big burst of inspiration, usually do some freewriting, free-jamming on the inspiration or topic and put the song together. Austin and I bring our song ideas to the rest of the band and then work together on arranging harmonies, instrumentation and some lyrical edits. Usually, the more we play a song, the more ideas we come up with.

Austin: For our 2018 album “Present,” I wrote most of the songs, but these days, Tamiko and I share the songwriting pretty equally. On “One More Drop,” the songwriting is split exactly evenly — six and six. We don’t really co-write songs together, though. If I write a song for the band, it’s more like, “Here’s a song I wrote. What do you think of it?” And then she’ll give me feedback or tell me the parts that aren’t working for her, and I’ll take it back and work some more on it and vice versa. Occasionally, we’ll make specific lyric suggestions for each other, but we typically do the lyric writing ourselves. It’s the music side of things where we collaborate more.

When it came time to head into the studio with this batch of songs, we took our arrangement and instrumentation quite a bit further. Tim composed some gorgeous piano parts on three tracks and an intricate string trio arrangement on “Patron Saint of Lost Things.” Tamiko arranged some saxophone parts to pair with her cornet on several tunes. I’m pretty helpless when it comes to percussion, so we usually trust Dan to do his thing on drums. But Dan also brings a great perspective to our songs. There are times when Tamiko, Tim and I will feel we’ve got a song all figured out, and then in rehearsal, out of the blue, Dan will be like, “You know, what this song needs is a jazz clarinet.” And more often than not, he’s spot on. Just listen to “Moon Garden,” featuring Chris Christoff on clarinet, as proof.

Tell me about the new record. How and when was it produced?

Tamiko: We’ve been working on the recording aspect of the album off and on for much of 2022, and we just wrapped things up last month. We are excited that the official release date is right around the corner on December 2, 2022!

Austin: It’s been since 2018 since our first album, so this sophomore album, “One More Drop,” has been a long time coming. But that has also allowed us to learn which of our songs had really stood the test of time over a lot of live performances. We recorded the album here in Lansing with Corey DeRushia at Troubadour Recording Studios. Then we had Ian Gorman at La Luna Recording & Sound in Kalamazoo do the mastering. Both were great to work with, and the band couldn’t be happier.

What lyrical themes do you touch on in “One More Drop”?

Austin: For me, songwriting serves a lot of purposes and takes me to a lot of places. Often, it’s a cathartic thing, something I need to do to help me process life’s many challenges. For example, I wrote “Where It Gets Exciting” as a personal response to the Black Lives Matter events I participated in back in 2020. Specifically, the song quotes John Lewis: “Speak up, speak out, get in the way. Get in good trouble.” I wrote it to remind myself not to fall back into the kind of complacency my white privilege affords me, even if it means — especially if it means — pushing me out of my comfort zone. “I Don’t Know How Long” is another song about dealing with life. This one was me processing the challenges of being cooped up during the COVID lockdown, about life as a parent trying to work a full-time job while juggling my kids’ educations simultaneously.

Other songs represent stories or capture snapshots from my life. “Swimming in Lake Superior” is special to me because I co-wrote this song with my daughter Anara, who was only seven then. We began writing this song together while spending a weekend up in the Upper Peninsula after swimming in the bracing waters of Lake Superior. Another snapshot song is the ballad “Patron Saint of Lost Things,” which tells the tragic tale of a bride who, while dancing at the wedding reception, loses her wedding ring, a groom’s family heirloom, just hours after saying “I do.” The Dangling Participles were the wedding band, so we witnessed the story unfold. But you’ll have to listen to the song to find out what happens in the end.

Tamiko: As I previously mentioned, sometimes I find inspiration for lyrics based on books or quotes. “Poetry in a Bottle” was inspired by a Robert Louis Stevenson quote I saw while visiting a wine cellar in France: “Wine is Bottled Poetry.” The imagery in this song plays with the love of words and flavors — sipping both with a love sitting across from you: “We’ll sip a lyrical bouquet and toast, a ta santé.”