The future is here — and it’s a frickin’ laser bong 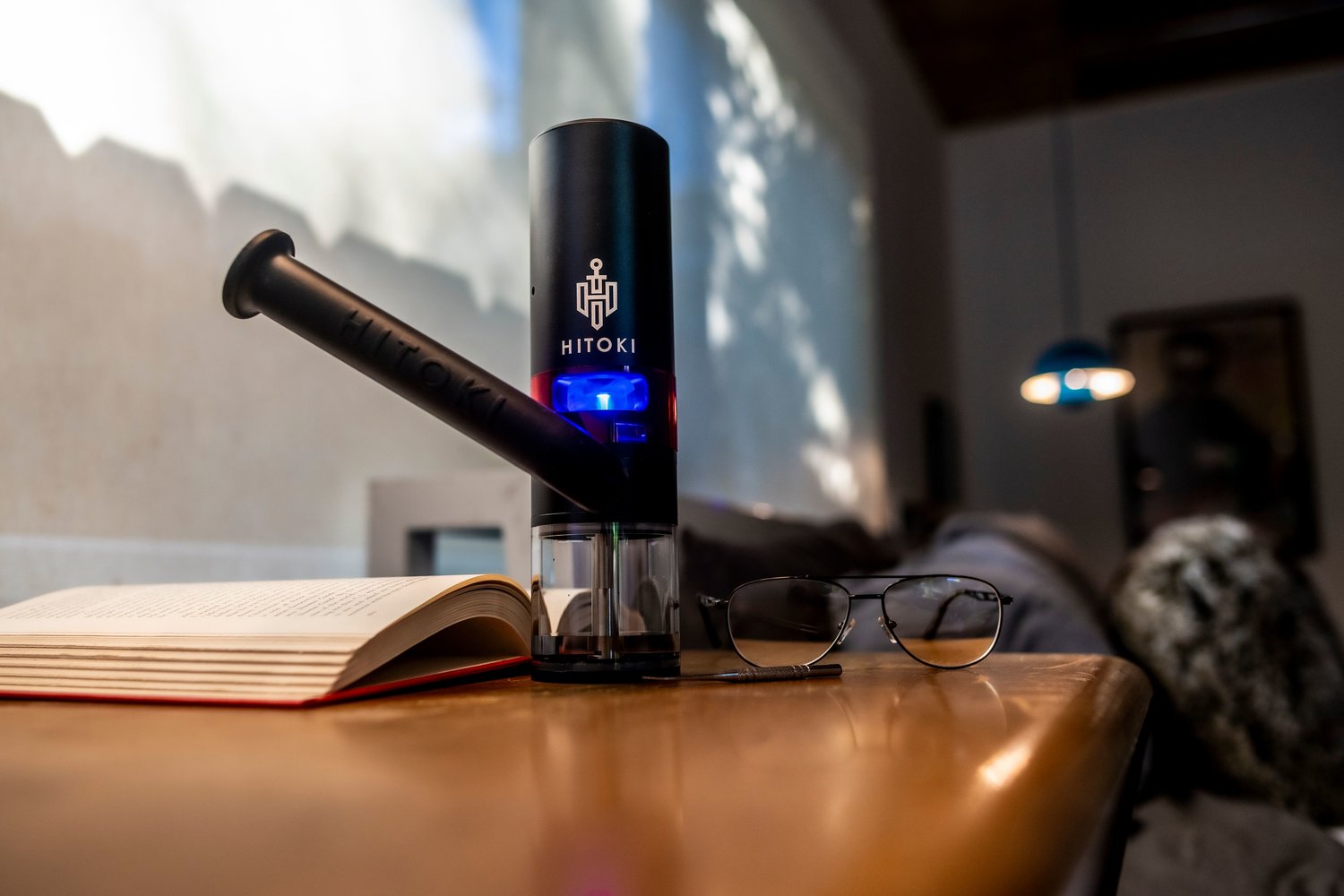 If you’re a regular reader of this column, then you already know that I prefer to keep these reviews focused almost exclusively on products from Greater Lansing. The Capital City is home to some pretty bright minds in the cannabis industry — and plenty of good weed, too. So, I rarely feel compelled to travel far in order to bring back some dank recommendations for our readers.

My spam folder must recognize this. Because when the folks at Hitoki reached out from Georgia to tell me about their latest smoking technology, it ended up going straight into my junk mail. And it would’ve stayed there too, had it not been for two words that caught my eye: laser bong.

That’s right. Hitoki somehow managed to travel back from the future to create a $500 water bong that beams down a high-powered laser onto your bowl to light your weed. The bongs over at Wild Bill’s simply can’t compete, so I figured I’d introduce Lansing to an out-of-state treat.

Joe Tran, who founded Hitoki in 2019 with his brother Jack, reportedly dreamed up the idea for the futuristic Trident bong after he smoked a joint, got really high and was inspired by those keychain laser pen pointer toys usually found near the checkout lanes at dollar stores.

But after toking on this thing for the last week, I can confirm: The Trident is no cheap gimmick. In fact, it easily takes the title of the most luxurious and high-tech item in my collection.

I’ll admit it: I was downright giddy about this sample package arriving from Georgia last week.

The bong comes in three colors: black, rose gold and 24K metallic gold. Mine was black. It also came along with a USB-C charging cable for its built-in battery and two mouthpiece attachments: a rubber, hookah-like hose and a more traditional, L-shaped silicone attachment. I preferred the latter because, well, it just felt more like a bong. It was also much easier to clean.

The assembly is cake: Just fill up the water chamber 25% of the way, plug in the battery and wait about 90 minutes for the blue light. Then, pack the ceramic chamber with ground-up bud, screw it all together, ditch your Bic and get ready to get totally baked George Jetson style.

Simply hold down the button on top of the device to send down a blue beam into the bowl that begins to instantly combust the bud, filling the bottom chamber with thick clouds of smoke. There’s also a choke button on the side for those who may have trouble clearing the chamber.

I found that each bowl lasted for about three hits. A full battery supposedly lasts about 280 hits — so long that I still haven’t had to recharge mine after about a full week of smoking every day.

That’s pretty remarkable considering this bong houses a Class IV laser beam, a cautionary category that is reserved only for the highest-powered lasers that give off enough heat to pose a fire hazard and burn risk, according to the U.S. Occupational Safety and Health Administration.

But don’t worry, paranoid stoners: The beam is totally contained inside a transparent, red-tinted plastic shell that allows you to watch the laser do its job without frying out your eyeballs. It’s also designed in such a way that it literally will not operate unless it’s securely locked in place.

It took me a few puffs to get the bowl glowing, but it really became a breeze after a bit of practice. And even though the single chamber is small, it still made for remarkably smooth hits.

Those unimpressed with the “state-of-the-art” technology may instead appreciate the cleaner combustion process. Unlike a butane-powered lighter, I felt the laser beam offered a healthier alternative to lighters and perhaps allowed for a truer flavor of the flower to shine through.

All told, this is definitely an eye-catching product that’s ridiculously fun to strut out in front of your pothead friends at parties. (I mean, how many people can say they’ve smoked a laser bong?)

It’s also great for luxury-minded smokers with some extra cash to blow on their favorite hobby.

And just in time for the holidays, Hitoki is offering 20% off the Trident from April 18 to 20, as well as other deals and giveaways throughout the month of April. Visit hitoki.com for more details.

Kyle Kaminski is City Pulse’s managing editor and a cannabis enthusiast who has been smoking marijuana just about daily for the last decade. Editor & Publisher Magazine has labeled him as “arguably, the state’s authority on everything you need to know about cannabis.”