The pleasures of parsley

This parsley potato salad is three recipes in one 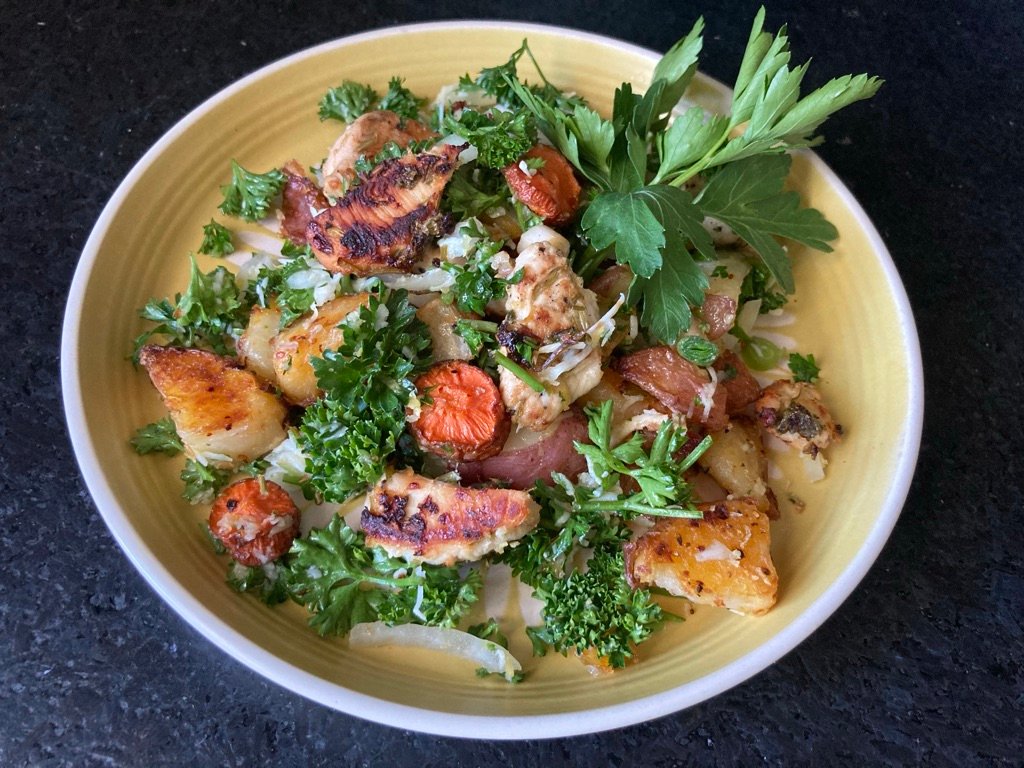 Curly parsley is widely scorned by the culinary elite. Aspiring chefs absorb this disdain from a young age, and quickly understand that getting ahead in this game requires committing instead to the flat-leafed version, also called Italian parsley. But in my parsley potato salad recipe, curly parsley does the heavy lifting.

Typecast as a garnish, curly parsley struggles to find any other purpose on the plate. It is admittedly tougher than flat, which means you have to work harder to extract the flavor. And while some eaters value an abundance of fiber in their diets, others will make a case for vegetables which lack the consistency of steel wool. Curly parsley can also be harder to clean, and the stems can curl over to make trimming them more of a chore.

Nonetheless, I have a soft spot in my heart for curly parsley because it was my first parsley. As a kid, I associated a solitary sprig of this crinkled leaf with dining out, which was one of my favorite activities. I could always count on that piece of parsley waiting on the edge of my plate. After dispatching the main event I would turn my attention to the parsley. Its chewy texture and herbal flavor was always a wonderful way to finish the meal.

Elsewhere on the menu during that era, parsley was nowhere to be found. But those were different times. Mediterranean specialty items like pesto, aioli and flat leafed Italian parsley hadn’t yet made the scene. The 98-percenters of America didn’t yet have the freedom to be food snobs the way we do now.

But now that we have choices, and the freedom to diss curly parsley, I figured I should re-evaluate my position on the subject. I reached out to a farmer friend to ask if nostalgia is the only reason to keep using it.

“Curly is underrated,” he said with the fervor of a salesman. “Chefs all prefer flat leaf. It’s wonderful, but so is curly. Unfortunately, curly’s role as a garnish at low-end chain restaurants gave it an undeserved bad name.  Old curly parsley on plates of bad late-night food is not the same as a sprig from your garden.”

My friend obviously dined at a different level than the establishments frequented by my parents and me. Poor guy probably never made it to Friendly’s, Nickerson Farms or some of the other mid-level comfort food powerhouses we used to visit, where the bread arrived warm and the parsley was fresh.

In her garden, my wife grows both flat and curly parsley. Each summer they go to seed, at which point the leaves shrink back and the plant makes babies. Some of the seeds will sprout in the cool wetness of fall, and overwinter. Some seeds will wait until spring before sprouting. “I haven’t planted parsley in five years,” she says. They are both criminally easy to grow, she says, though curly parsley is slower to bolt in summer.

At the table, she says, they both have their place. Curly parsley has more body, which is nice in a thick salad, like a summer tabbouleh. In leafy salads, the shape of curly parsley can grab onto dressing and wrap itself in flavor.

My curly parsley potato salad makes the most of the three dimensionality of curly parsley. Tossed with warm potatoes, the sturdy herb wilts but doesn’t fold, filling out the dish with its bulky flavor. This recipe includes several of my favorite techniques, including how to make insanely puffy oven potatoes, and for making my famous lemon chicken, which is a highly recommended non-vegetarian option. So basically, this parsley potato salad is three recipes in one.

This warm, hearty salad combines many of the first crops of spring. It readily accepts proteins such as crumbled bacon or browned ground meat. But chunks of lemon chicken are my favorite.

2 large carrots, cut into pieces of similar size to to the potatoes

If you’re including the lemon chicken, you can start the marinade while the potatoes are boiling, and bake the chicken at the same time that you bake the potatoes.

Add all of the ingredients to a bowl and thoroughly mix. Let marinate for about 30 minutes. Transfer to a baking dish and spread evenly. Bake for 15 minutes at 400, or until they start turning golden.