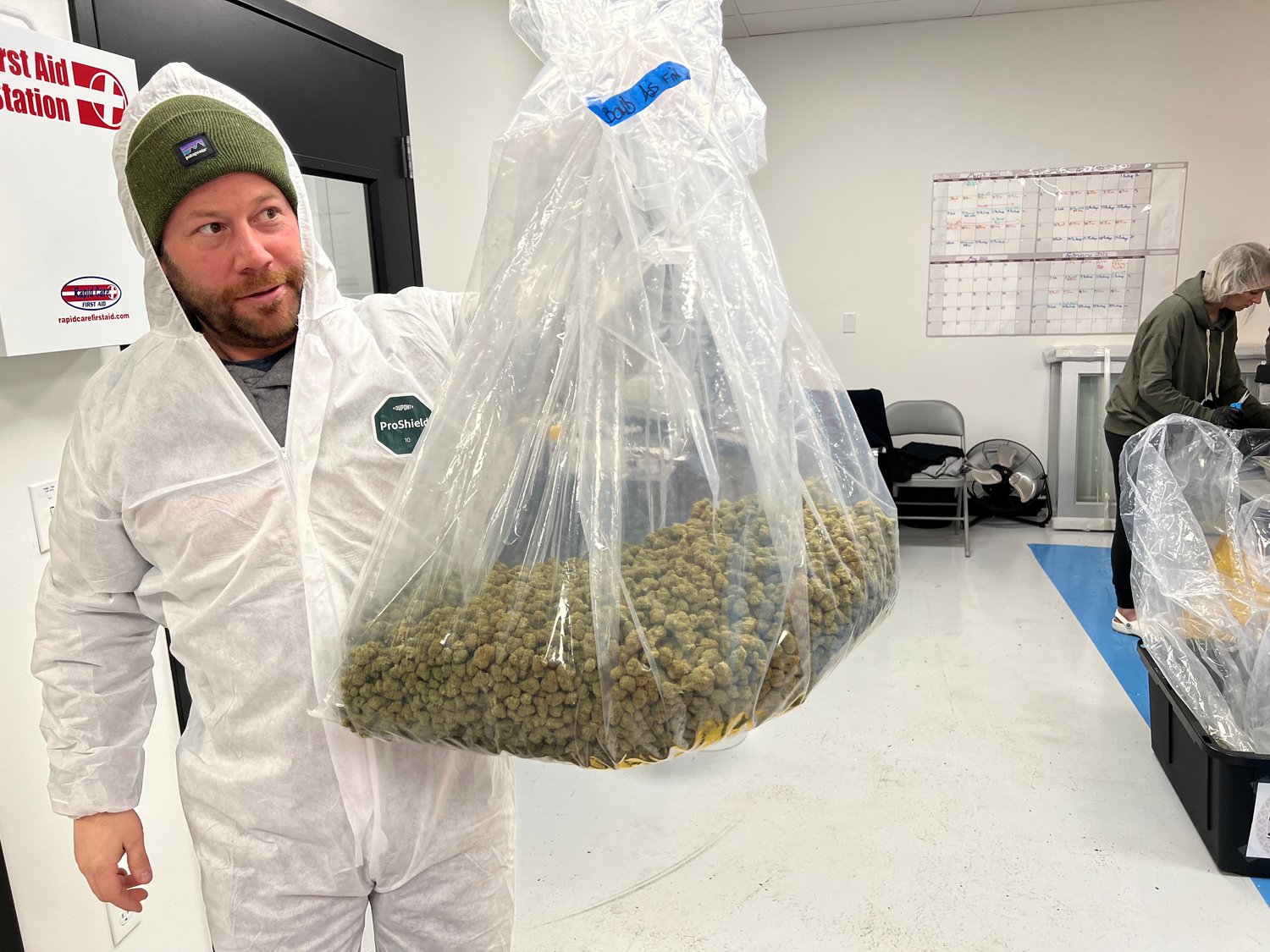 If you couldn’t already tell from the pleasant odor, there’s a bit of cannabis cultivation magic happening inside that old automotive service station on Hosmer Street across from Art’s Pub.

Inside the nondescript garage, about 4,000 marijuana plants are constantly blooming their way to the recreational pot market. About 250 lbs. of bud rolls out of the building monthly — from so many plants, that they have to be stacked inside on top of one another like dank little bunk beds.

Mike Thackeray is one of several cannabis entrepreneurs who have descended on that otherwise quiet corner of the city’s eastside along Kalamazoo Street. There’s a bit of cannabis cultivation magic happening behind his building, too. And in that ominous looking black building across the street. And behind that building. And in that large warehouse behind Art’s Pub, too.

All told, there are enough state licenses within one block of Thackeray’s shop to accommodate at least 7,500 plants. It’s a bustling operation that I now refer to as the city’s “Terpene District.” And after toking on some of the finished product, I’m ready to vote in Thackeray as its mayor.

Thackeray has been involved in the weed game for decades before it was made recreationally legal in Michigan. About three years ago, he decided to bring his talents to the licensed level with Terple Gang — a terpene-focused cultivation brand focused on high-end (yet affordable) weed. With its first harvest in September, his outfit now boasts about two dozen employees and supplies a range of provisioning centers, including Homegrown, Gage and Meds Cafe in Lowell.

“The biggest thing for us is trying to find and grow new strains with a big focus on their terpene profiles,” Thackeray told me as we wandered through towering rows of frosty white plants. “It’s about finding genetics that work well for us in terms of cultivation, but also finding genetics that work well for our customers, growing the strains that people want for whatever they may need.”

Thackeray reached out after he read a recent column in which I pledged to stop putting so much emphasis on the THC content of any given strain — which I’ve learned plays a fairly insignificant role in determining the overall dankness of your bud and the potency of the resulting high.

The quality of the stoned experience, instead, is guided heavily on the terpene profiles — the thousands of different combinations of cannabinoids that work together with THC to create a series of different physical and psychoactive effects and dictate how you feel when you’re high.

Terple Gang (as the name implies) always grows with terpene profiles in mind, Thackeray said. And that makes sense, because some of the samples tested with a terpene content above 3%.

“We’re a group that has operated in the traditional market and we’re making our transition to the legal market,” he added. “So, how do we compete with the big boys? We make a really high-end, craft product that you just can’t find anywhere else. We believe in superior products.”

An intricate array of hoses connects each row of plants to industrial-sized tanks inside the building — all of which are wired to a digital display so the staff can tinker and automate the nutrient or water levels, or adjust the humidity, temperature and light at the touch of a button.

The growing room floor is also unique in that it’s set up in two layers — with dozens of rows of plants stacked vertically like bookshelves, doubling the square footage and cultivation output.

And in true laboratory fashion, I had to gear up in a Hazmat suit for a 20-minute tour last week.

At least five unique strains from the Terple Gang have hit the shelves at pot shops across Lansing — ranging in price from $25 to $40, depending on the retailer. Thackeray said that up to 30 other varieties are set to be developed exclusively for the Michigan market later this year.

Here’s a look at a few of them:

The limonene is strong with this strain, which smelled and tasted like a lemon meringue pie with just the slightest funky diesel notes on the side. The buds, which glistened with trichomes, were also incredibly dense and sticky — enough to quickly gum up even the highest quality grinder.

About halfway through one joint, a pleasant warmth poured over me. My eyelids felt noticeably heavier. The rest of my body (including my mind) felt fully uplifted, yet somehow totally relaxed.

An energetic kick of initial chattiness quickly transitioned into a two-hour daydream — one that I spent accomplishing a mundane task in a video game and eating an entire bag of potato chips.

These buds had a dessert-like berry aroma with a mild touch of earthy woodsiness — like a combination of blueberries, mint, graham crackers, a strawberry malt, dryer sheets and grapes.

Strange as that may sound, it all made for a delectably sweet flavor profile and one hell of a smooth smoke. One joint also gave me the burst of energy needed to actually take care of some chores around the house, so I’m reserving the rest of this bag exclusively for evening dog walks.

Also: I was bummed that I finished those chips with the Bombulan. Serious munchies here too.

I saved the best for last with this fruity, indica-dominant strain — a cross between my all-time favorite, OG Kush, and Durban Poison. Aside from the pungent cherry-like flavor, the most noticeable feature of this strain was that it was almost entirely purple and caked with trichomes.

Seriously: I’ve never seen weed this frosty. I truly felt bad grinding up something this pretty.

Those berry notes — along with more lemon — came through in the flavor profile, which also had a bit of grassy earthiness on the exhale. One joint planted me deep in my couch with a dumb smile on my face for most of Sunday afternoon, culminating with a two-hour beauty nap.