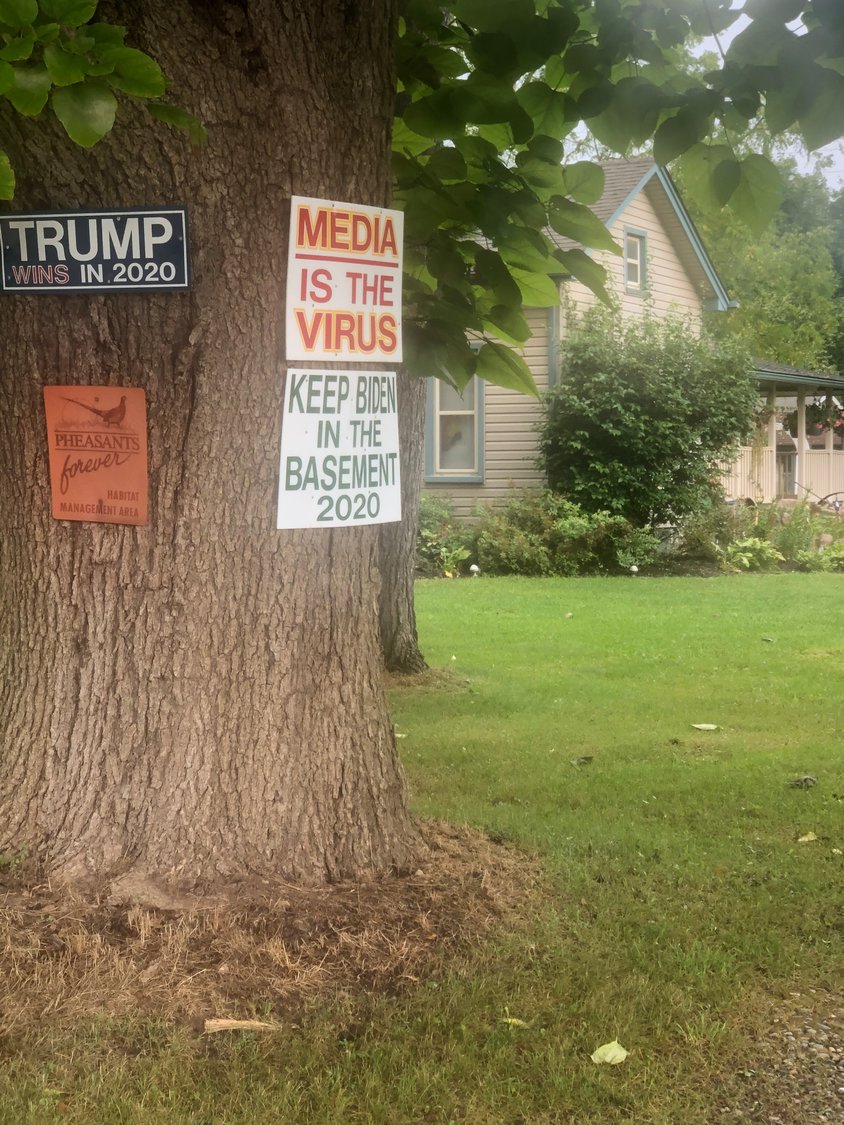 TUESDAY, Sept. 15  — Nailed to a huge tree outside a house somewhere between Eagle and Portland, I ran across a first-of-its-kind yard sign reading, "MEDIA IS THE VIRUS."

It was here, about 20 miles into my five-day, 500-mile bicycle journey from Lansing to Mackinaw City, that the political landscape I'd only passively noticed before it came into focus.

People are displaying A LOT of political stuff this year. Like, really, a lot.

Do you ever remember anyone flying a flag promoting a political candidate?

No. Because it's never happened before. There weren't flags for Bill Clinton in '92 or George W. Bush in '00. Barack Obama had his iconic "Hope" picture from '08. But nobody flew flags.

Last week, I saw dozens of homeowners — maybe even 100, I honestly lost count — from Wacousta to Bliss flying Donald Trump flags. Sometimes, more than one. Sometimes above American flags.

Forget the official stuff, other property owners made their own signs. Or spray-painted pro-Trump messages on their vehicles. The more rural the home, the further north I biked, the more likely I was to see the Trump flag.

Trump didn't have the monopoly. Joe Biden had plenty of his lawn-ornament pride, too. Much more than I ever saw in 2016 for Hillary Clinton.

It me about a half mile before I figured out what the "BYEDON 2020" sign with the blond swoosh meant. (Hey, I was at mile 105 on my third day, cut me some slack). The closer I biked to suburban or urban areas, the more I saw them.

That didn't surprise me. What did surprise me was how many pro-Biden, anti-Trump signs I saw in West Michigan, along Lakeshore Drive between Holland and Grand Haven, for example. Wasn't this supposed to a Republican haven?

And, yet, I saw just as many signs for seemingly token Democratic MI-2 candidate Bryan Berghoef as I did for incumbent U.S. Rep. Bill Huizenga, R-Zeeland.

When I stopped at my buddy's house outside of Free Soil, WZZM-13 seemingly ran the same commercials for John James, Gary Peters and Democratic MI-3 candidate Hillary Scholten over and over and over. Serious money being spent for a Democratic congressional candidate in West Michigan? Really?

Oh, the National Rifle Association had an anti-Biden ad running during the local news segment, too.

Folks are fired up about this election and not in some traditional way. Nobody is wearing cute little campaign buttons. Trump has turned his brand of Trump Towers or Trump Steaks or Trump Vodka into being a Trump American — basically, "I am what I am and if you don't like it, tough. … You say he called veterans 'losers?' He downplayed COVID-19 virus to some reporter a half year ago? FAKE NEWS!"

Trump has made being a rich, plain-spoken American so desirable, people are wearing hats and shirts bearing his name or his simple "Make American Great" catchphrase. Trump isn't just a political candidate, he's a brand that folks are throwing themselves behind like a football team or a NASCAR driver.

In Freeland last week, people sat in an hour-long car line to be at his presence.

Democrats still haven't figured out how to curb the enthusiasm. Some new blockbuster story isn't going to do it. A large paid-media campaign somehow equating the Trump brand to something undesirable might dull the shine.

Otherwise, Democrats can pin their hopes on Biden’s having more supporters than Trump. Simple numbers. It might work.

My report from the open road is there's a lot of enthusiasm out there. Just warning you, it runs both ways.

(Kyle Melinn of the Capitol news service MIRS is at melinnky@gmail.com.  His column on statewide politics and legislative issues appears weekly.)