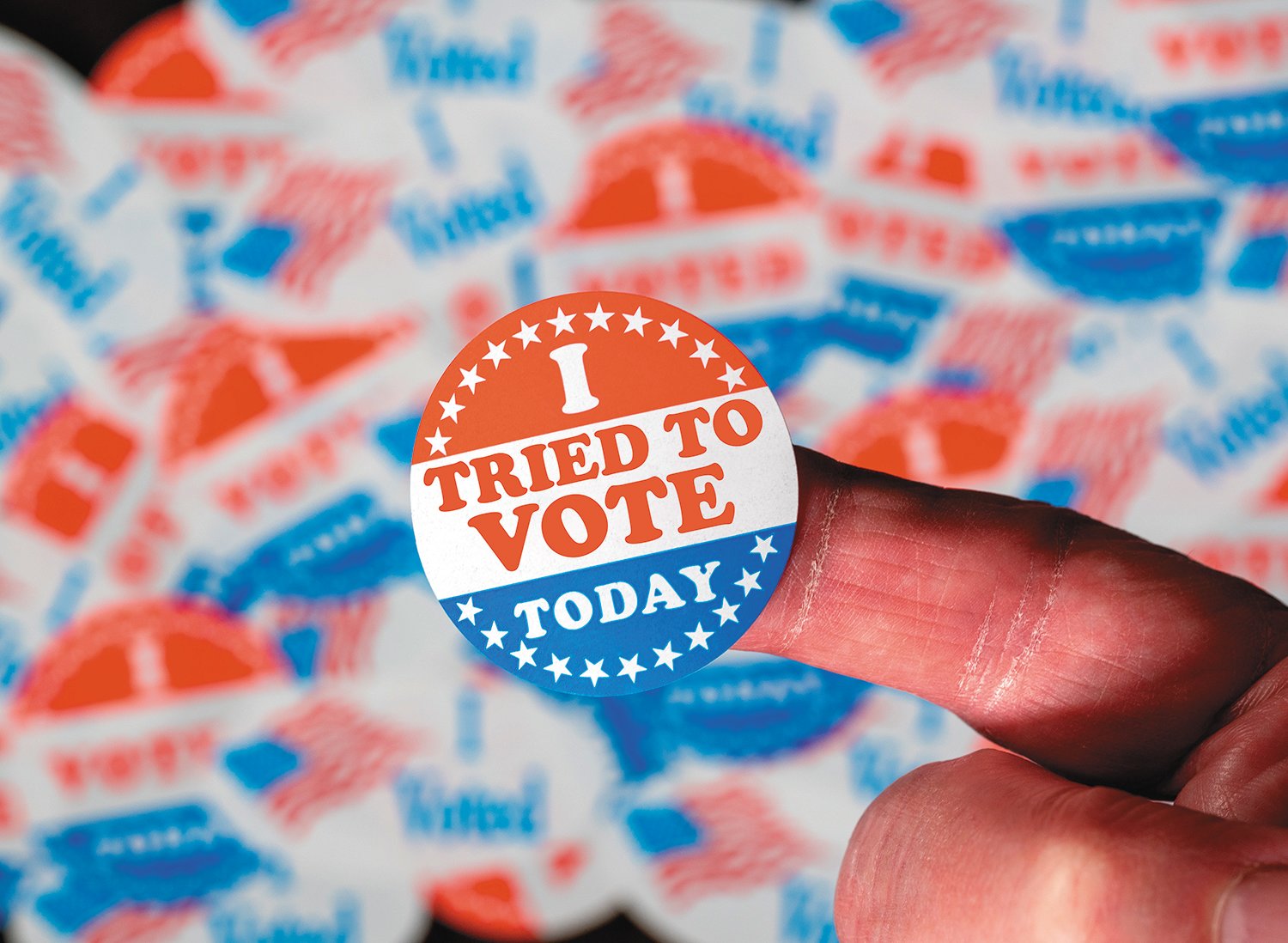 Finger with I Voted button in front of voting stickers given to US voters in Presidential election to illustrate vote suppression or rejections
Courtesy
Posted Wednesday, October 6, 2021 12:00 am
Staff

Just when we thought the Republican crazy train claiming last year’s presidential election was stolen had finally run out of steam, now comes the Grand Old Party’s latest attempt at voter suppression, this time in the form of a petition you’ll soon be asked to sign by an earnest volunteer in the parking lot at Meijer’s. As New York baseball great Yogi Berra purportedly once said, “It’s deja vu all over again.”

The specifics of the petition will sound familiar to those who are paying attention. This year, Republicans in the Michigan Legislature introduced a series of bills that aimed to restrict voting, especially by absentee ballot, knowing full well that if they made it to Gov. Gretchen Whitmer’s desk, she would relegate them to the trash bin of history with a stroke of her veto pen, which she did Sunday. By using Michigan’s unique, petition-based system for initiated laws, however, they can bypass her office altogether. More on that in a moment.

First, flying under the predictably misleading banner of “Secure MI Vote,” the new petition seeks to undermine the sweeping voter access reforms approved in 2018 by an overwhelming vote of the people of Michigan that made it much easier to vote by absentee ballot. The results of those changes were dramatic — more than 3.2 million out of 5.5 million Michigan voters cast their ballots by absentee in the 2020 presidential election. Of course, Republicans abhor absentee voting because it improves access to voting for marginalized groups that typically favor Democrats. Thus the “Secure MI Vote” cabal was convened to lead a renewed effort to disenfranchise these groups.

Approved last week by the state Board of Canvassers, the group’s petition would prohibit the secretary of state and local clerks from sending unsolicited absentee ballot applications to eligible voters, even though both political parties and countless candidates routinely do the same thing. The plan would require Election Day voters to show a photo ID, eliminate their ability to sign an affidavit and require those applying for absentee ballots to include their driver’s license or state ID number, along with the last four digits of their Social Security number. It would also prohibit clerks from accepting donations from third parties to help underwrite the cost of election-related activities like deploying additional absentee ballot drop boxes or hiring more poll workers.

If the petition sponsors are successful in obtaining the signatures of 340,047 registered Michigan voters — equal to 8% of the votes cast in the last gubernatorial election — their plan will be presented to the Republican-controlled Michigan Legislature, where it can be approved as a new state law with nothing more than a simple majority vote, and with no opportunity for a gubernatorial veto. In essence, it’s a method by which a relatively small number of people can impose their will on the rest of the state by circumventing a statewide vote.

In fairness, we note that this peculiar provision of Michigan’s ballot initiative process has benefitted some of the causes about which progressives are quite passionate. Two such initiated petitions were elevated to new laws by the Legislature in 2018, one that increased the minimum wage and indexed it to inflation, another that required employers to provide paid sick time to their employees. Two other initiated petitions, one to repeal the state’s prevailing wage statute and, most recently, rolling back the governor’s emergency powers, were advanced by conservatives and became law without going to the statewide ballot.

One might say what’s good for the goose is good for the gander, that if progressives can advance their agenda through the initiated law process, so can conservatives. We have a different perspective. Regardless of their political leanings, the ease with which a motivated minority can make new laws for the entire state, provided they have a cooperative legislature, would make the Founding Fathers roll over in their graves.

Even though progressives have used petition drives to change state laws just as much as conservatives, we think it’s a loophole that should be closed. While we support the long-held power of the people of Michigan to bypass the normal legislative process through a statewide ballot, the Legislature shouldn’t have the option to circumvent a vote of the people by adopting the petition as law through a simple majority vote. If they choose to do so, Michigan’s Constitution should subject the proposal to gubernatorial review and possible veto, just like any other new law. This would preserve the essential checks and balances that make our system of democratic government work best.

If the “Secure MI Vote” voter suppression effort succeeds, there is no stopping the radical right from pursuing all manner of retrograde rubbish via petition drives, including draconian restrictions on abortion, further eroding or even eliminating the governor’s emergency powers, and whatever else they think they can get away with.

There are three ways to stop them: The first is for Democrats or another public interest group to launch a statewide ballot drive to amend Michigan’s Constitution, getting rid of the language that allows the Legislature to bypass the Governor’s Office and unilaterally pass initiative petitions into law. All valid petitions with sufficient signatures would have to be placed on the statewide ballot. Another is to elect a Democratic majority in the House or Senate, which would prevent Republicans who control both chambers from rubber stamping the next wave of deranged petitions.

In the short term, the third option is the only one we’ve got, which is to refuse to sign the “Secure MI Vote” petition. As sure as the sun will rise tomorrow, petition circulators will use every trick in the book to make their voter suppression plan sound eminently reasonable in an effort to get you to sign it. Don’t be fooled.