What’s all the fuss about caregiver cannabis in Michigan? 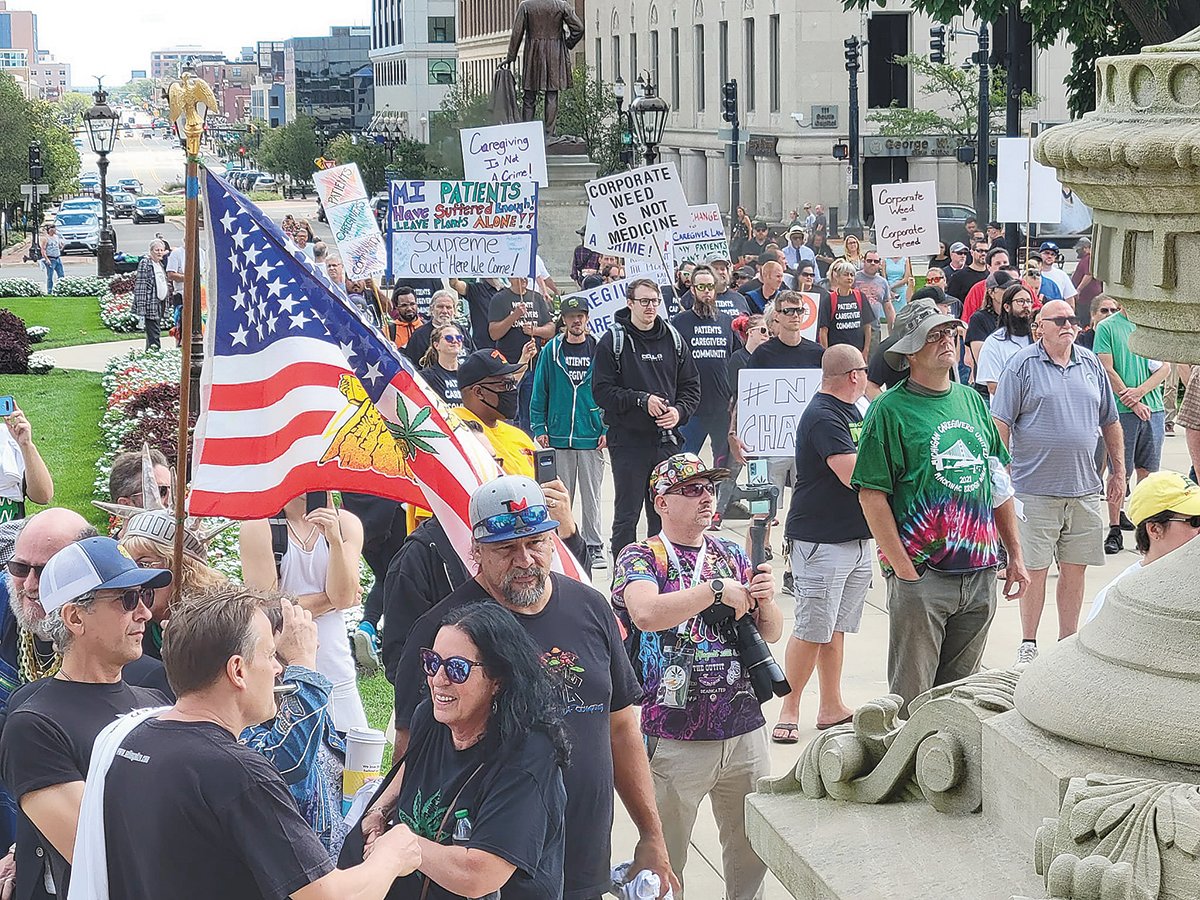 Cannabis activists gathered at the Capitol to protest proposed legislation that reduces the number of plants and patients marijuana caregives can have.
Courtesy/Rick Thompson
Posted Wednesday, September 22, 2021 11:27 am
KYLE KAMINSKI

Hundreds of cannabis activists gathered at the State Capitol last week to push back against recently proposed state legislation that aims to reduce both the number of plants that medical marijuana caregivers can cultivate as well as the number of patients they can serve.

In the meantime, average pot-smoking customers across Michigan have been left wondering: What’s the point in this legislation? Does any of this affect me? And why should anyone care? As a service to our curious readers, I tapped the brakes on plans for a product review this week to break down the details — and potential impact — of the recently proposed state legislation.

State law allows licensed caregivers to cultivate up to 12 marijuana plants or purchase up to 2.5 ounces of product for up to five patients — enabling a harvest of up to 72 plants if the caregiver is also registered as a medical marijuana patient. Unlike licensed retailers, caregivers are not required to submit lengthy business plans to the state or pay as much in licensing fees. Their products also don’t have to be tested at one of the state’s 17 licensed state laboratories.

State records showed there are about 30,000 caregivers servicing more than 250,000 patients outside of the $1.47 billion licensed retail market in Michigan, including more than 1,200 caregivers and 8,600 patients across Greater Lansing in Ingham, Eaton and Clinton counties.

State officials said about 72,000 patients statewide are connected to a licensed caregiver. The other 178,000 patients can either grow from home or shop at medical and recreational stores.

House Bill 5300, 5301 and 5302,  introduced last week, comprise what lobbyists have labeled as the “Michigan Cannabis Safety Act.” The legislation would limit caregivers to growing a maximum of 24 plants by March 22, 2022 — 12 for themselves; 12 for one patient.

With 30,000 caregivers, that would reduce their maximum yield from 2.16 million plants to 720,000 plants that could be grown simultaneously among caregivers in Michigan. It would also reduce the legal limit on how much product they can each store at home from 15 to five ounces.

Additionally, the proposal would also require that cannabis cultivated by caregivers only be grown indoors and also be tested for product safety at a licensed laboratory. The legislation also sets up a new process for caregivers to sell their overages to licensed retailers and requires the state (and individual municipalities) to sign off on a new “Specialty Medical Grower” license.

The bipartisan bills were introduced by state reps. Jim Lilly, R-Park Township; Ronnie Peterson, D-Ypsilanti; TC Clements, R-Temperance; and Richard Steenland, D-Roseville. If the legislation makes its way out of the House Committee on Regulatory Reform, it will require a supermajority vote among lawmakers because they seek to amend a voter-approved initiative.

The Michigan Cannabis Manufacturers Association, the trade group leading the charge on proposed changes, is led by Steve Linder, a lobbyist and longtime GOP operative with a history of advocating for more stringent cannabis regulations. Among its board of directors are executives with High Life Farms, Skymint, LivWell and Common Citizen, which Linder has described as the “General Motors, Fords and Chryslers” of the weed business.

A public relations firm hired by the MCMA has refused to specifically identify its members.

The new rules are designed to promote safety, transparency and accountability for those participating in the state’s regulated cannabis market. They would also “rein in” the unlicensed cannabis industry, which “threatens the health of all Michiganders,” Lilly said in a statement.

The bills have also been sold as a way to cut back on “black market” sales, which account for more than $2 billion in unreported revenue annually, according to an MCMA-funded study.

The MCMA also funded a recent poll of 577 likely voters that found 82% of respondents had supported additional testing for caregivers, as well as 78% of respondents also supporting subjecting caregivers to the same level of state regulation as medical and recreational retailers.

At least 300 cannabis companies across Michigan have come out swinging against any changes. Several companies have also distanced themselves from the MCMA after its plans went public — including Pleasantrees CEO Randy Buchman, who resigned from its board.

The state Department of Licensing and Regulatory Affairs is not promoting any changes. The Michigan Cannabis Industry Association (and its 300 members) also vowed in June to oppose the legislation before it was introduced. MCIA Director Robin Schneider said brands affiliated with the MCMA are “idiots” — namely for “spending a bunch of money and trying to ruin other people’s lives and your brands simultaneously,” she said on an episode of Jazz Cabbage Cafe.

Activists have argued that there is very little (if any) evidence to suggest that untested caregiver-grown pot creates any sort of public health risk. Rick Thompson, executive director of NORML of Michigan, said the bills were instead motivated by greedy corporate cannabis brands who would rather not have the competition from caregivers.