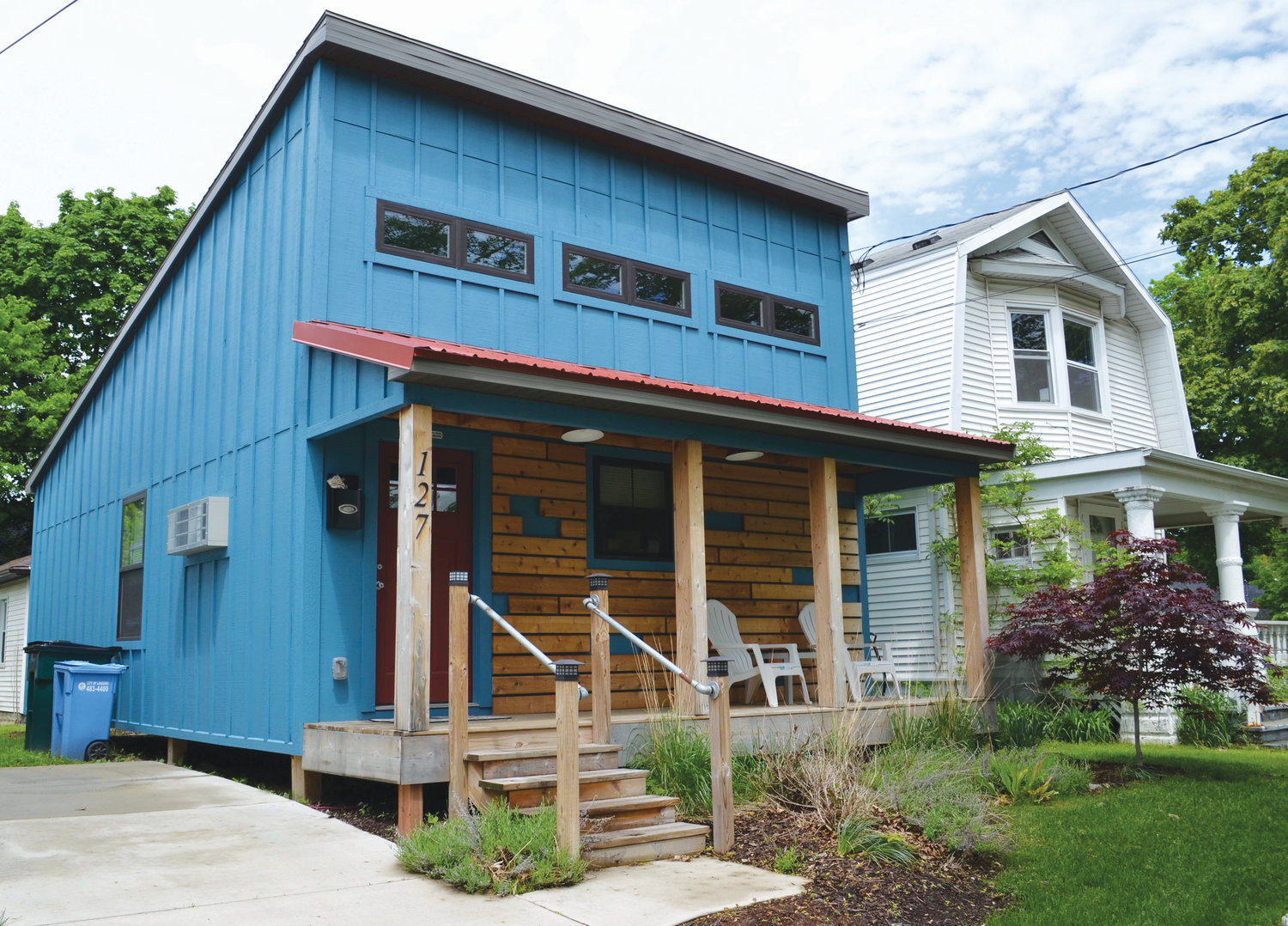 Developer Brent Forsberg is eager to tap further into the smaller-home market in Lansing after the successful construction of this 600-square-foot, one-bedroom home on Elm Street in REO Town.
Kyle Kaminski 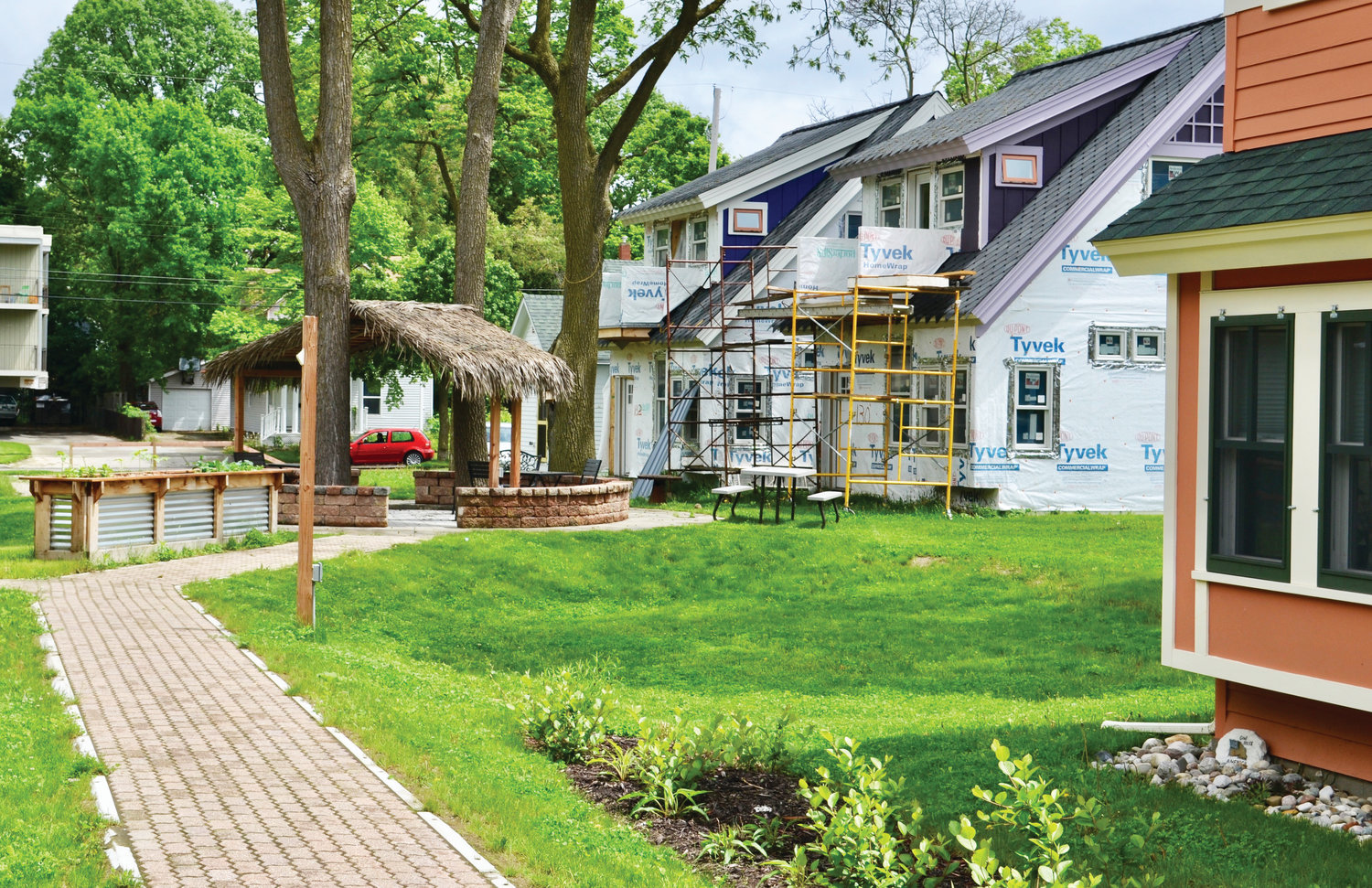 Cottage Lane is home to several small cottages on Lansing’s eastside. Local builder Dave Muylle hopes to have the project wrapped up in the next four years as he navigates his way around local ordinances and codes.
Kyle Kaminski
Posted Wednesday, July 3, 2019 2:44 pm
Kyle Kaminski

Take a stroll far enough down Regent Street and you might forget you're still in the city of Lansing.

Wedged into the east side’s conventional, single-home and single-lot grid is a small village created by local builder Dave Muylle. It's a neighborhood within a neighborhood, with a shared garden space, a cabana and a landscaped brick walkway to connect several, smaller cottage-homes — all of them smaller than 1,000 square feet.

Muylle doesn’t necessarily like the phrase “tiny homes.” They’re small. They create a sense of community. The real estate world would call them quaint. But zoning restrictions might be more quick to label them a headache, he contended. While Muylle is passionate about his project, he admits he’d never try something like it again.

“No typical developer would try to do this either,” Muylle added.

“It’s just too much work to justify the effort it takes to make things like this possible. There’s this crazy system that everyone has to wade through to get to this point. It’s nobody’s fault. It’s just the way the rules are written.”

Zoning ordinances, by nature, are designed to impose restrictions on land use and development. Brian McGrain, the city’s director of planning and economic development, said those rules — along with the building code — help ensure structures are built safely, add value to the city’s housing stock and conform to local neighborhoods.

But a lot of it hasn’t been updated in decades. And a growing voice is calling for a modern-day facelift.

Some local developers contend that restrictions within zoning ordinances, along with the often-convoluted process for variances and municipal approval for construction, can pose a hindrance to homebuilders and would-be homeowners — especially for newly built homes with a smaller-than-typical footprint.

Muylle started construction on Cottage Lane in 2007. More than 10 years later, he’s still working. Most cities aren’t conducive to tinier homes, at least those that fall below minimum foundation sizes. In Lansing, most homes need to measure at least 24 feet by 24 feet. Smaller lots, on occasion, will allow for 20-foot-by-20-foot developments.

Bigger, as they say, is usually better. The system is built on the idea. And any exceptions are a long shot.

“I don’t really know how you could make a case for a variance,” said Lansing’s zoning administrator, Sue Stachowiak. “If anybody really wanted to pursue tinier homes in the city, they’d have to contact a City Council member and see if there is any support for a change in the ordinance. It really would be difficult otherwise.”

“There’s just not as much allowance for creativity anymore,” Muylle said. “Things have been moving in that direction for a while. We all want to build safe houses, but the process is just so burdensome, and it tampers down a lot of that creativity. It seems people without a lot of resources just can’t build anything anymore.”

Added McGrain: “A lot of times, people want to do things that just don’t fit into our building and zoning codes. These exist, on one hand, to lead to consistent and attractive development patterns in the city. From a building standpoint, it also contributes to safety and livability in these places.”

Developer Brent Forsberg is eager to build more smaller-scale homes after the success of his 600-square-foot home on Elm Street in REO Town. It only has one bedroom with no upper or lower level and no garage, but there’s a renewed market interest for small-scale urban homes, he said.  Not everyone needs that much space.

“We’re looking at basically a reboot of the industrial age bungalow and the smaller, workforce house in the 600-to-900 square-foot range,” Forsberg said. “We’ve been working on approval for this for eight months and we just received notice about this foundation restriction. It just throws up another barrier to development.

“We’d like to look at a diversity of housing stock, but ordinances like this are standing in the way.”

Plenty of published research points to economic benefits in smaller-scale living. Tiny homes — although often much smaller than 600 square feet — are also growing in popularity with the rise of TV shows like HGTV’s “Tiny House, Big Living,” among several others. They can also be more affordable and environmentally friendly.

“Smaller homes can be reinvigorating to a neighborhood,” added Developer Jeff Deehan. “They bring fresh energy, creative spaces, and younger people that want to have more options for financial viability. There are a lot of people interested in these products but a lot of our city’s housing stock are these aging, larger buildings.”

Grand Rapids limits single-family homes to a minimum of 750 square feet. In Ann Arbor, every dwelling unit requires at least 225 square feet of habitable room space. Some municipalities also allow smaller homes — depending on their size and location — to qualify as an accessory dwelling unit or “granny flat,” as often labeled.

The construction of smaller homes could lead to a wider array of affordable housing options for residents, especially first-time homeowners looking to live and work within their cities, Deehan said. They can also cost less to build and fit into smaller parcels, using less energy and improving overall affordability on the local market.

But the system of codes and rules — especially with foundational minimums — is stalling development.

“A lot of it just comes down to the idea that doing something different is difficult,” said Developer Scott Schmidt. “There are a lot of advantages to smaller homes with shared green spaces, but the biggest barrier is the approval process and a system that doesn’t want to allow for change and almost seems to be resistant to it.”

Added Deehan: “A lot of people are looking into smaller homes. These developers are being told the city does not want smaller homes. They only want larger, family-style homes. They’re just not issuing permits for anything else. These are the types of rules that can be seen as arbitrary and sometimes harmful policy measures.”

Mayor Andy Schor wants to see “all options” for housing in Lansing but he hasn’t weighed in one way or another about streamlining the construction of smaller homes in the city. His only requirement: The building needs to meet codes and city ordinances. Some are concerned about smaller homes being lower quality, he said.

“We have several smaller homes that are not in good shape, which could be due to less quality and could be due to less upkeep. So, some may make an argument for not repeating the mistakes of the past,” Schor added. “I have yet to hear a complaint or a proposal (for zoning changes). If someone has a proposal, I’m willing to look at it.”

City Councilman Adam Hussain, who chairs Economic Development and Planning Committee, labeled the movement toward tinier homes a “fad.” He said their affordability is tempting, but a lot of that savings could be lost in self-storage rentals. Besides, Lansing already has plenty of affordable options.

“There are folks that are intrigued by the idea but I don’t believe it will last,” Hussain said. “Tiny homes are, well, tiny, and they are very impractical. Individuals can’t start families in these homes and families can’t grow in these homes." Hussain believes tiny homes don't have the same appeal in Lansing as they might have in other cities.

Added Lansing City Council Vice President Peter Spadafore: “Affordability is important, but we have to be careful not to kowtow to fads in construction designs. In 10 years, is this going to be something we regret? I don’t have much of an opinion, I just don’t know this is something that needs to be addressed in Lansing.”

Muylle, in the meantime, plans to keep pushing the boundaries of existing zoning restrictions as he continues to charge forward with his project on Cottage Lane. If all goes well, he hopes to be finished in the next four years. But, as his experience has showed, he knows not to keep his fingers crossed for an expeditious timeline.

“Unless you’re a big developer and have engineered drawing and architects to design it, it’s very difficult to build in Lansing,” Muelle added. “In a lot of neighborhoods, people can’t afford to bring in that expertise. We need to figure out a way for people to invest in their communities. It’s good for the neighborhood and helps everybody.”