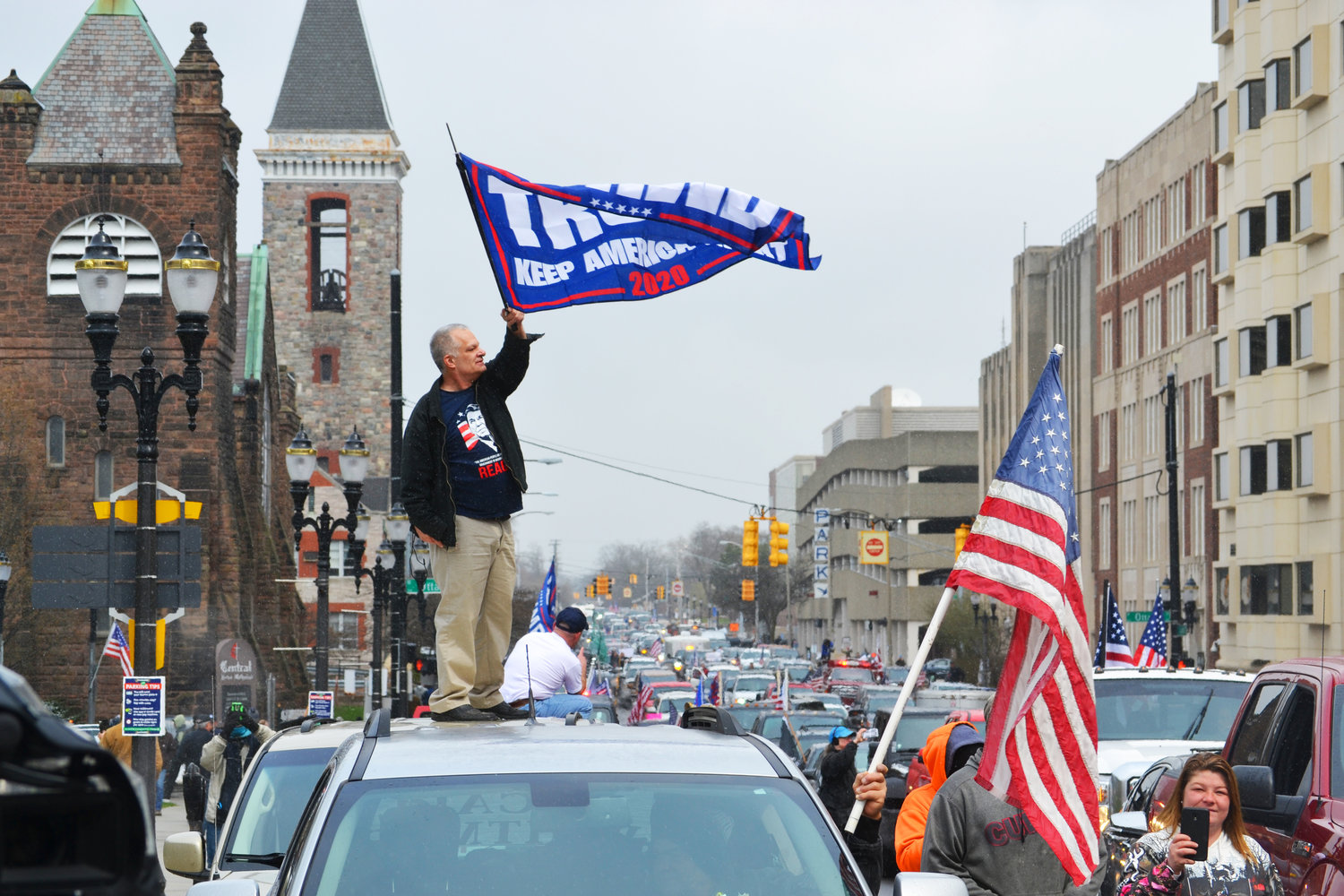 A man waves a Trump flag atop his vehicle.
Skyler Ashley 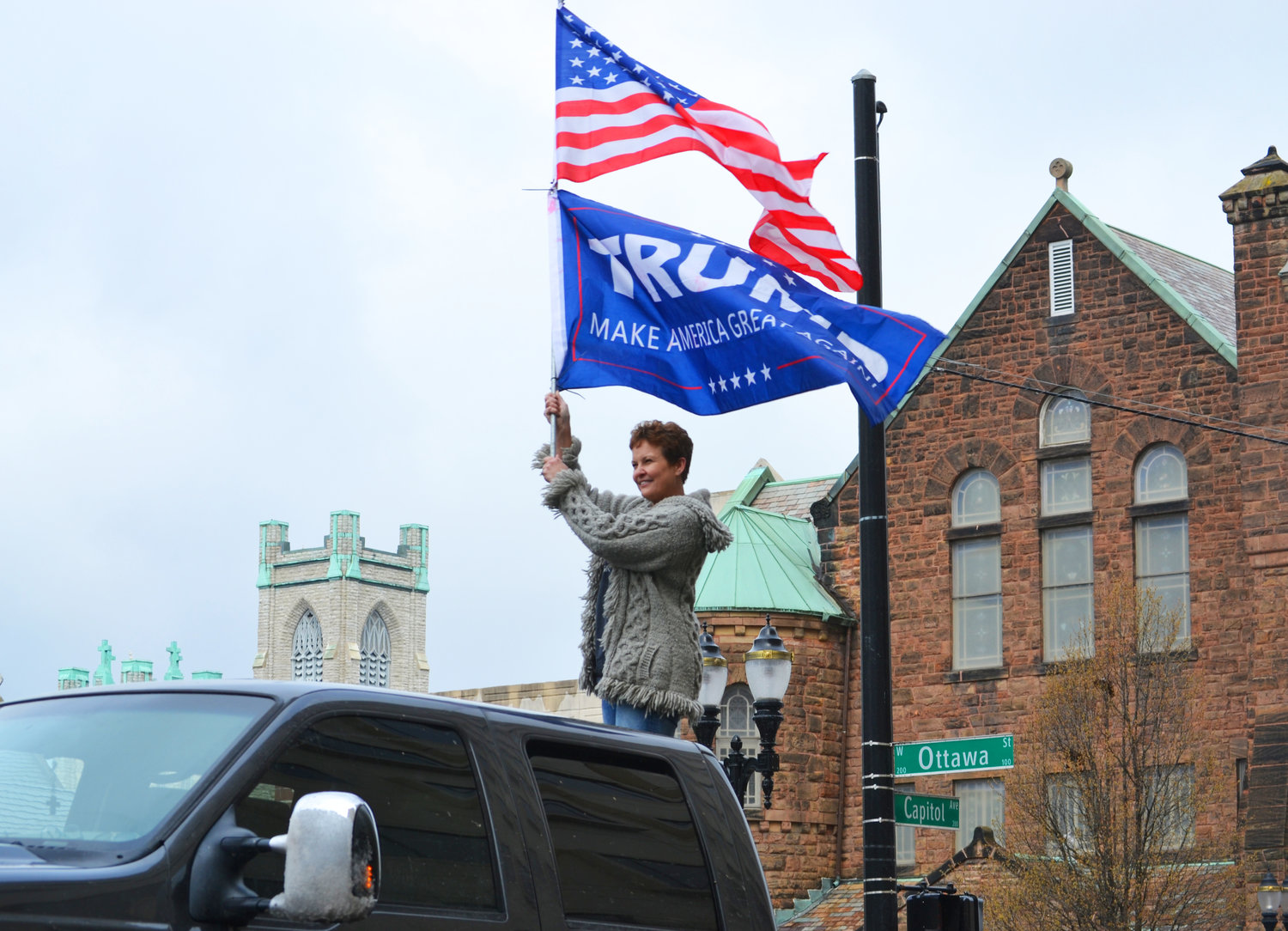 A woman flies and American Flag and a Trump flag from her pickup truck.
Skyler Ashley 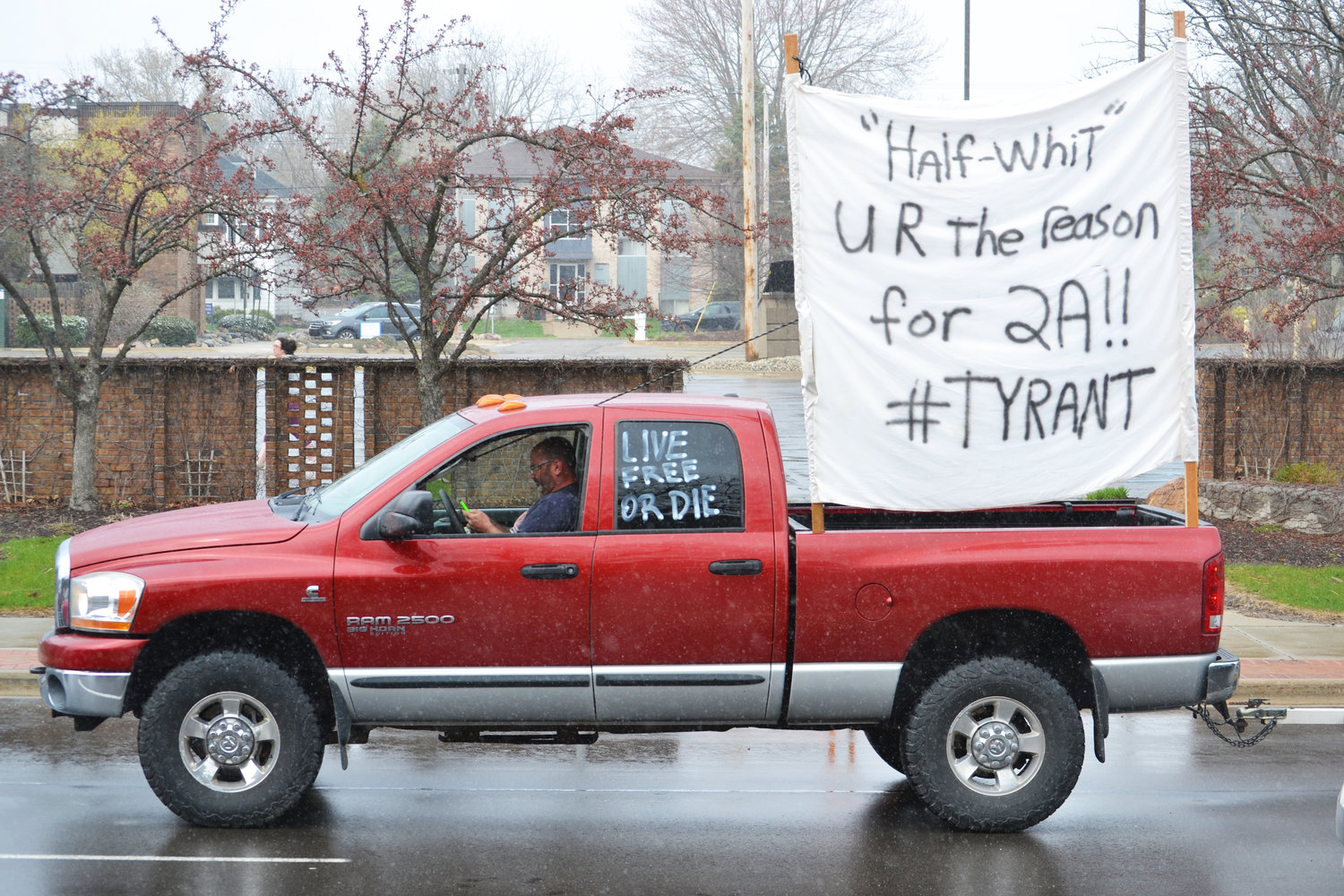 A protester at the capitol today.
Skyler Ashley 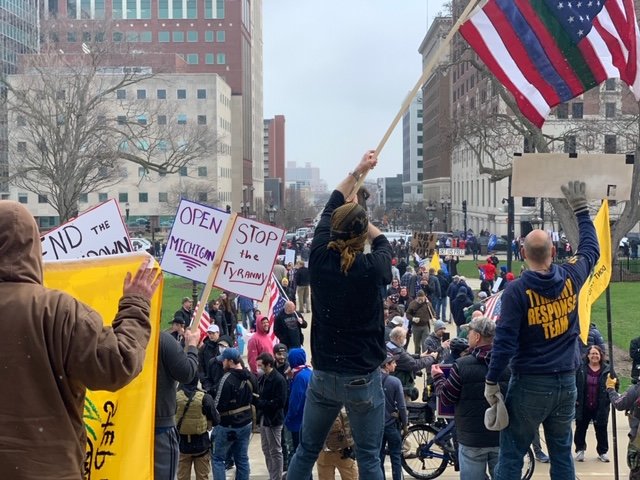 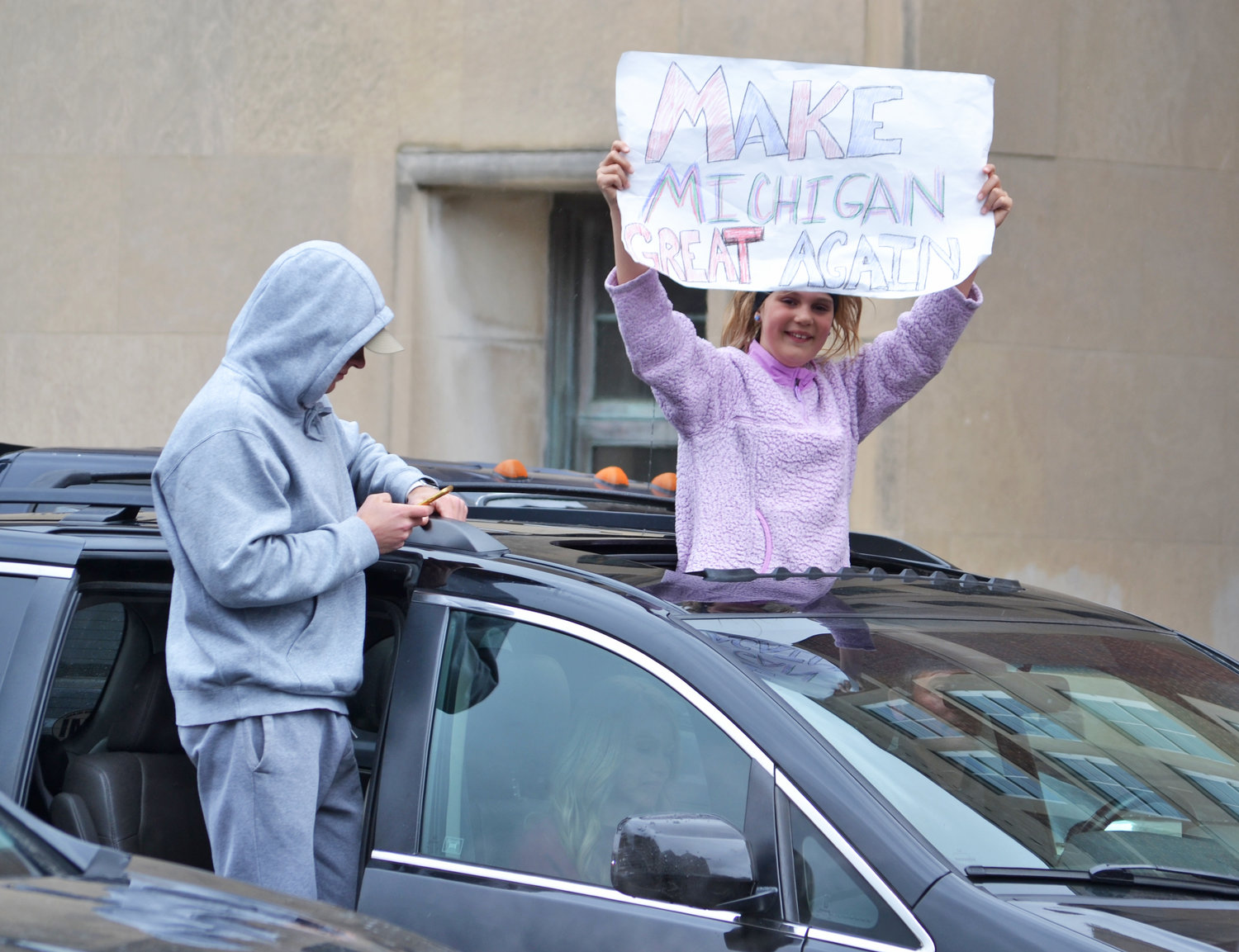 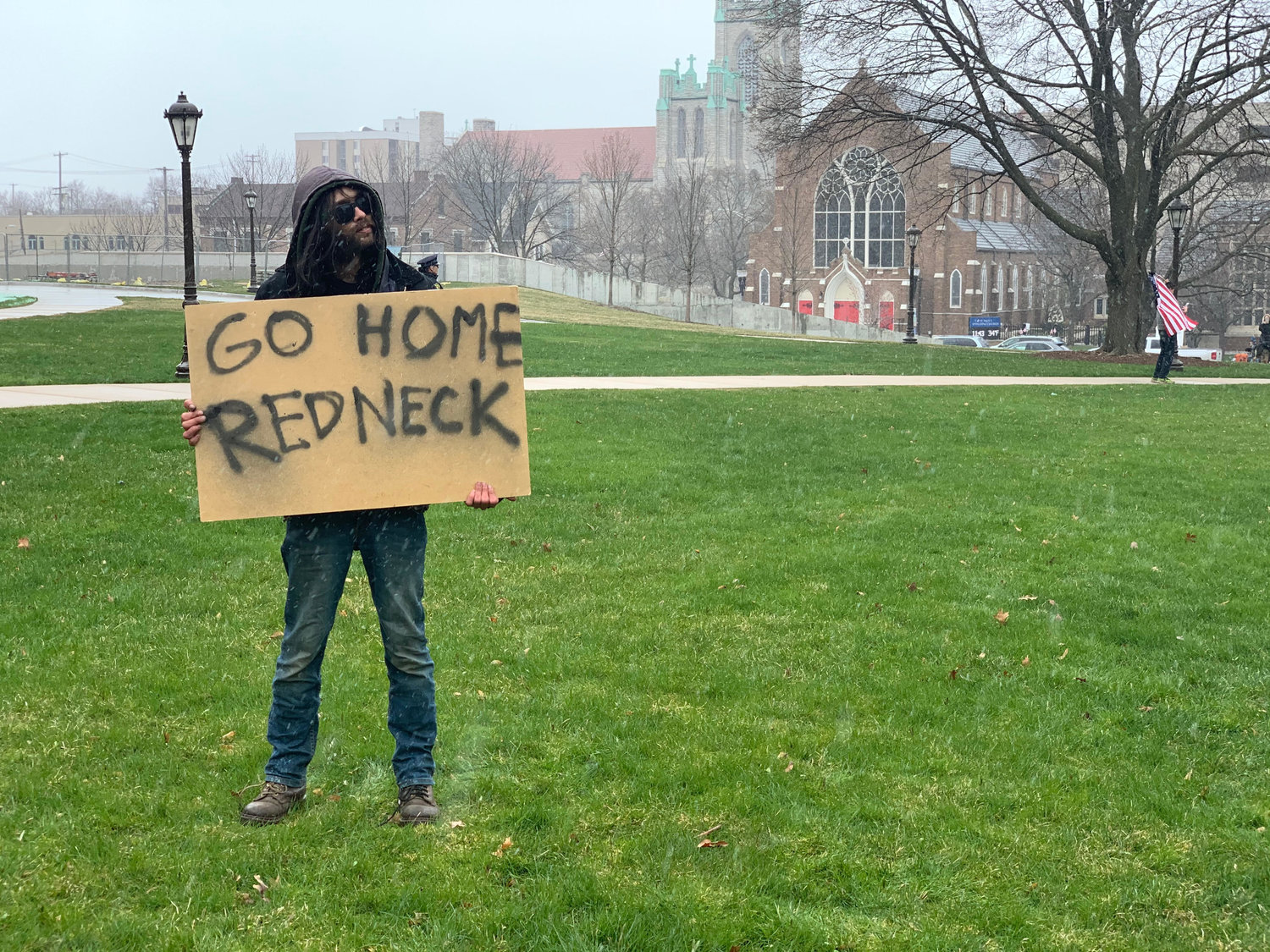 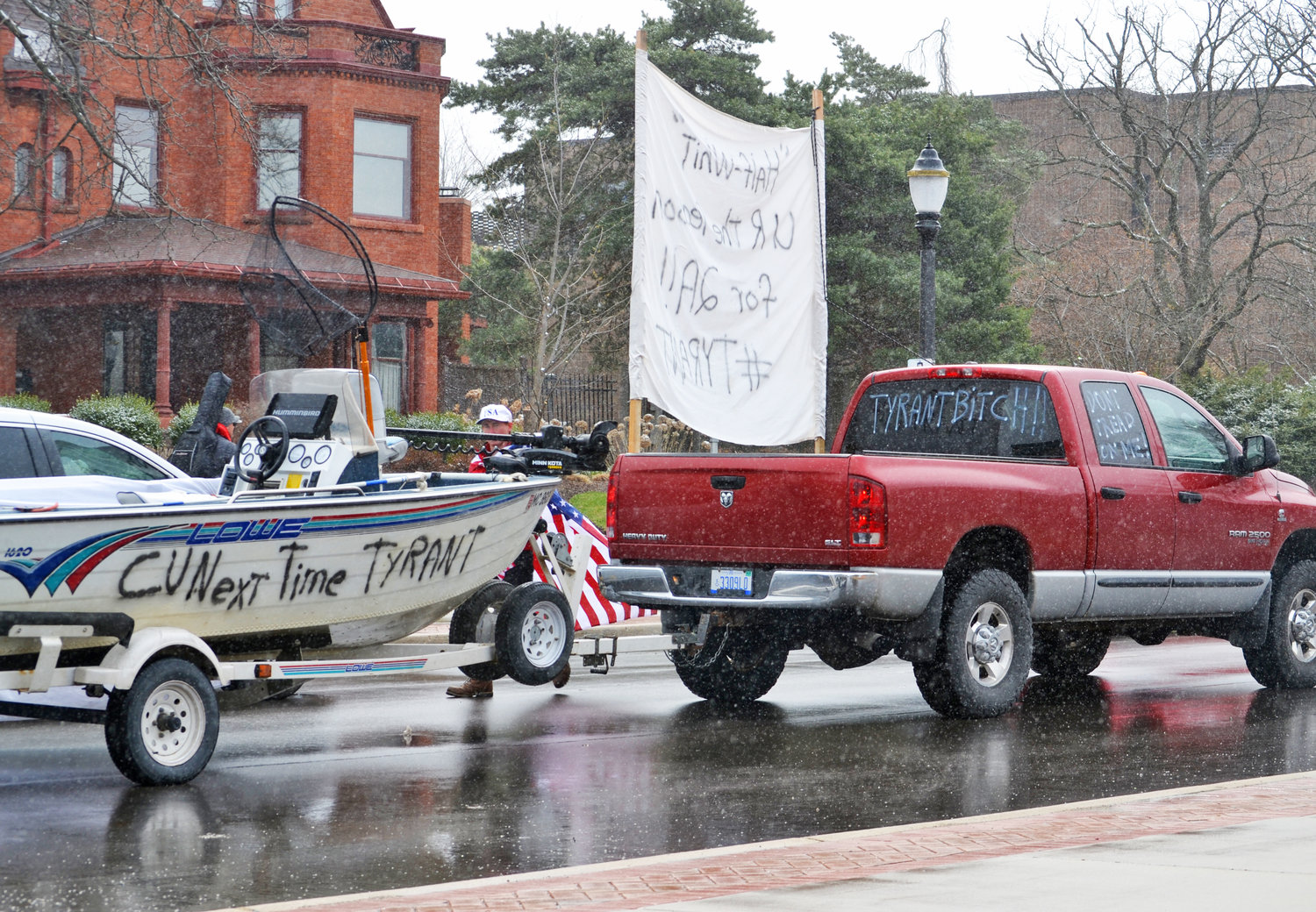 A protester at the Capitol today.
Skyler Ashley 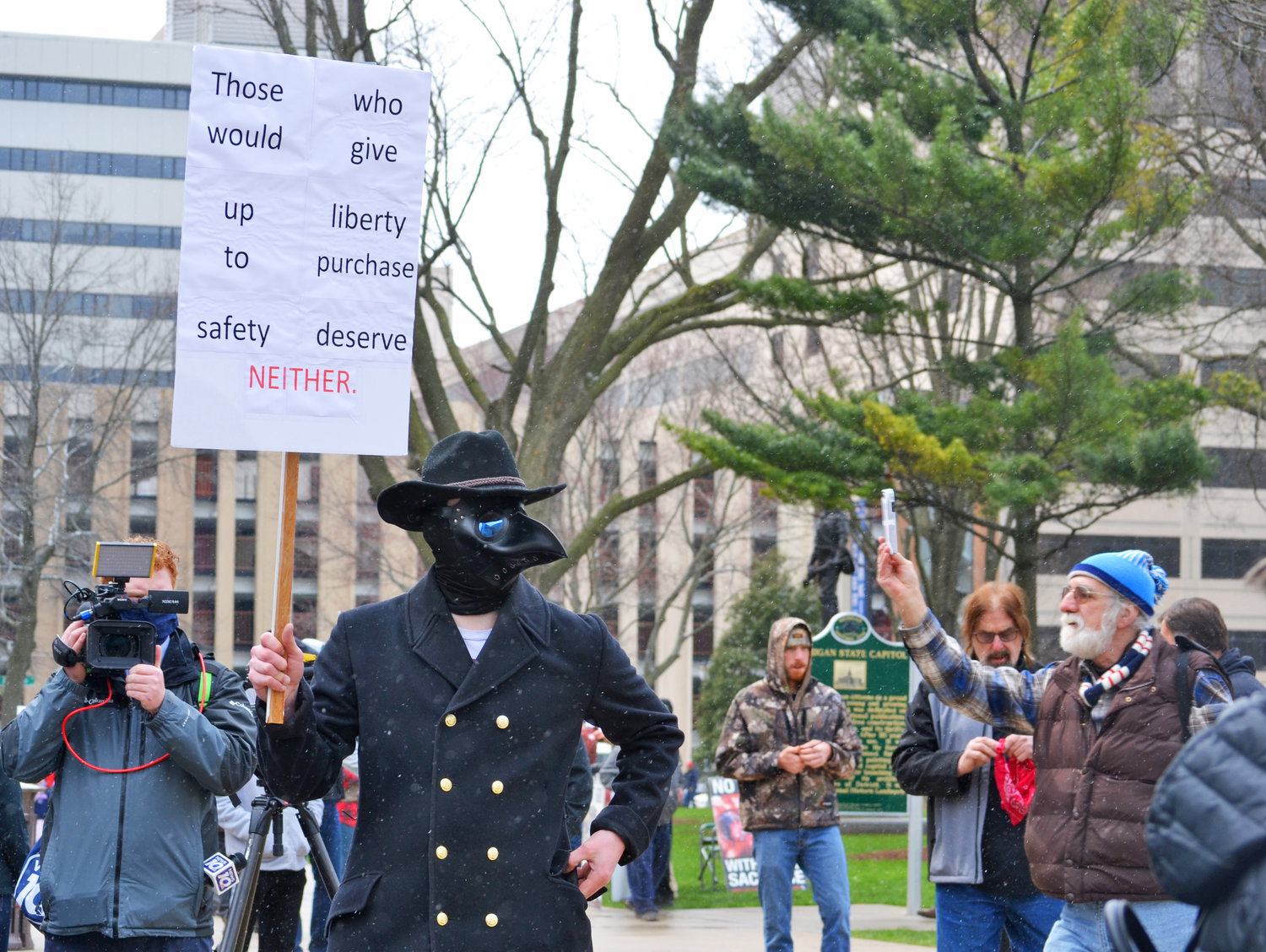 A man dons a plague doctor outfit at the protest today.
Skyler Ashley 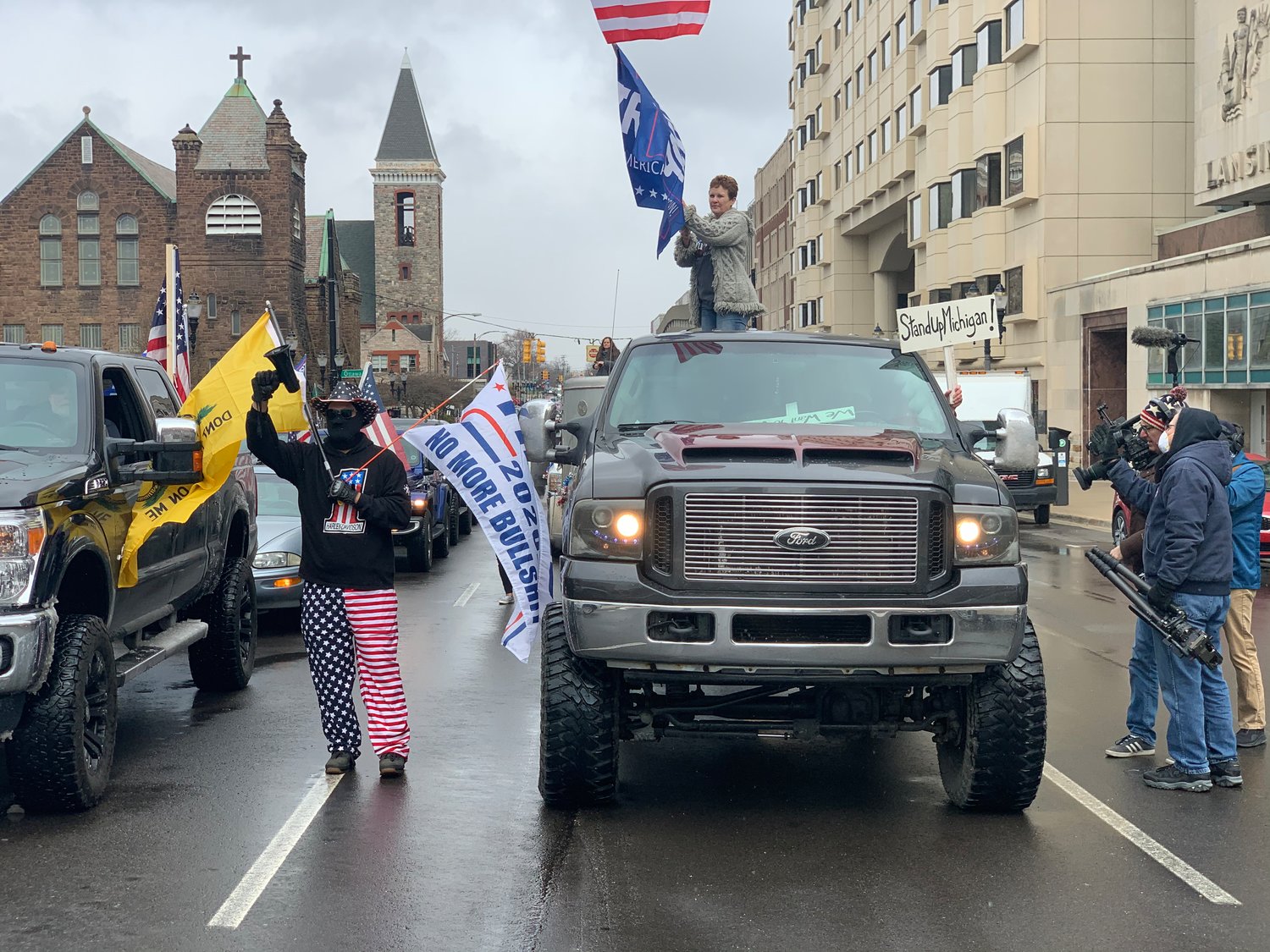 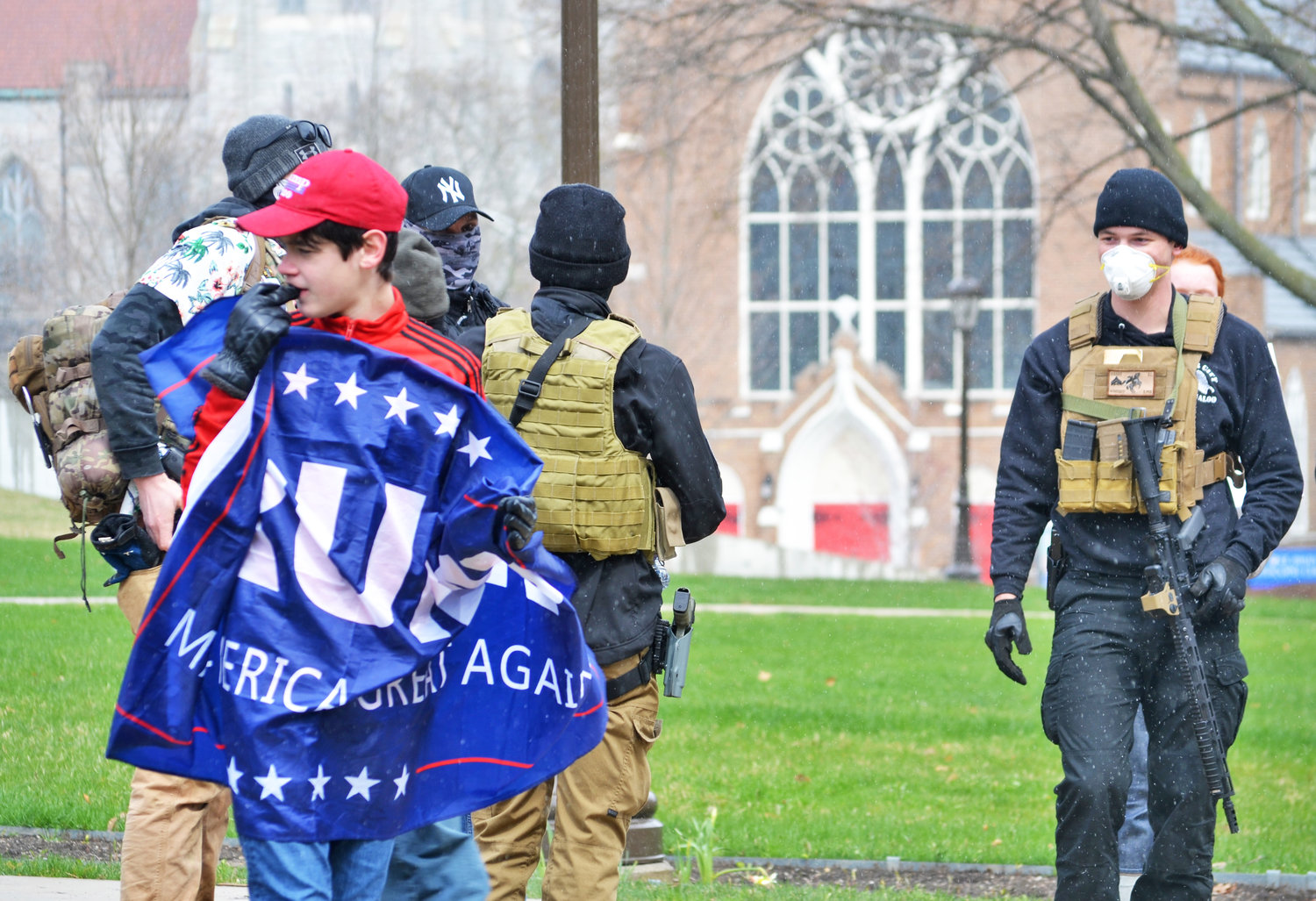 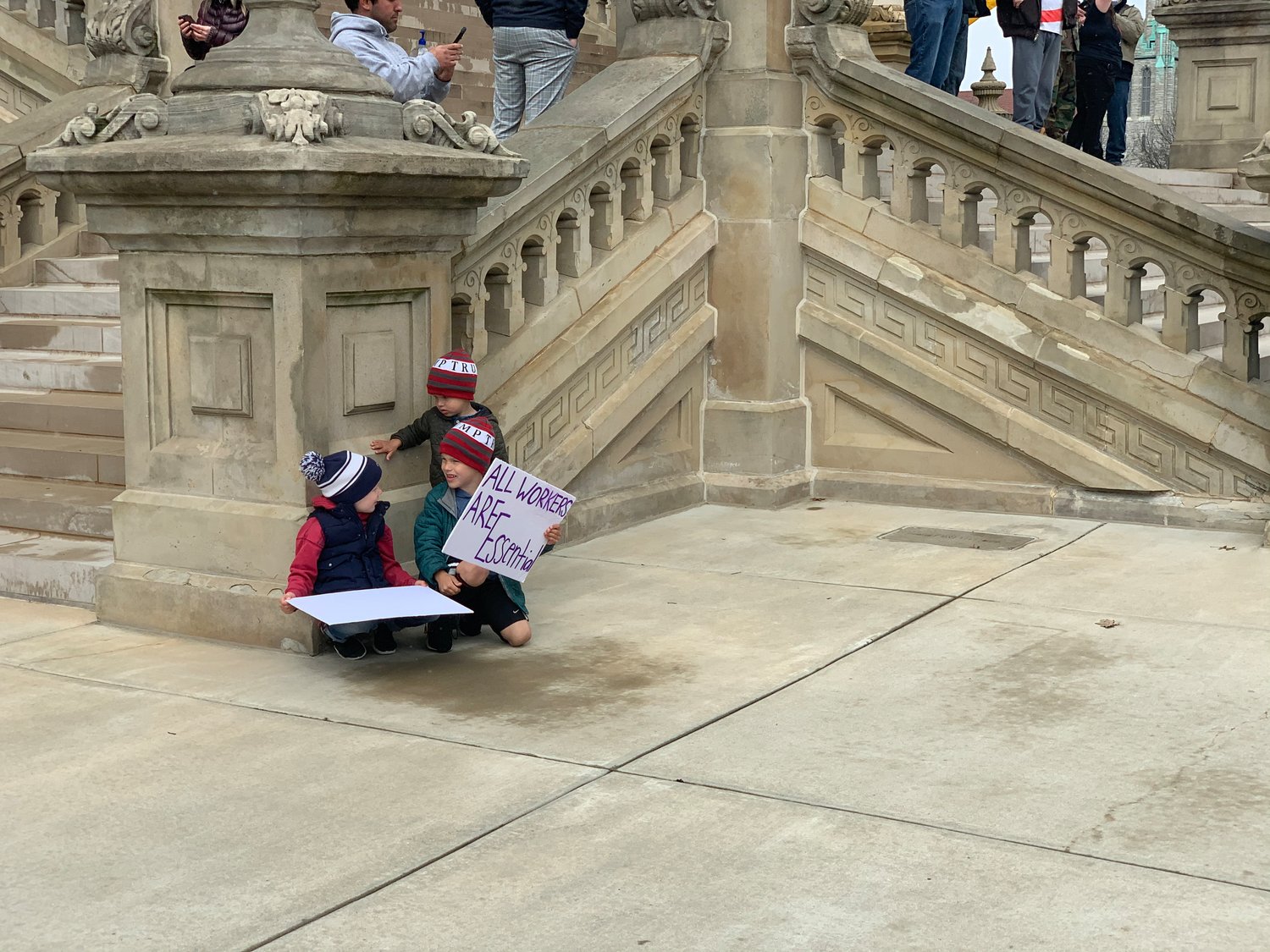 Police at the Capitol.
Kyle Kaminski 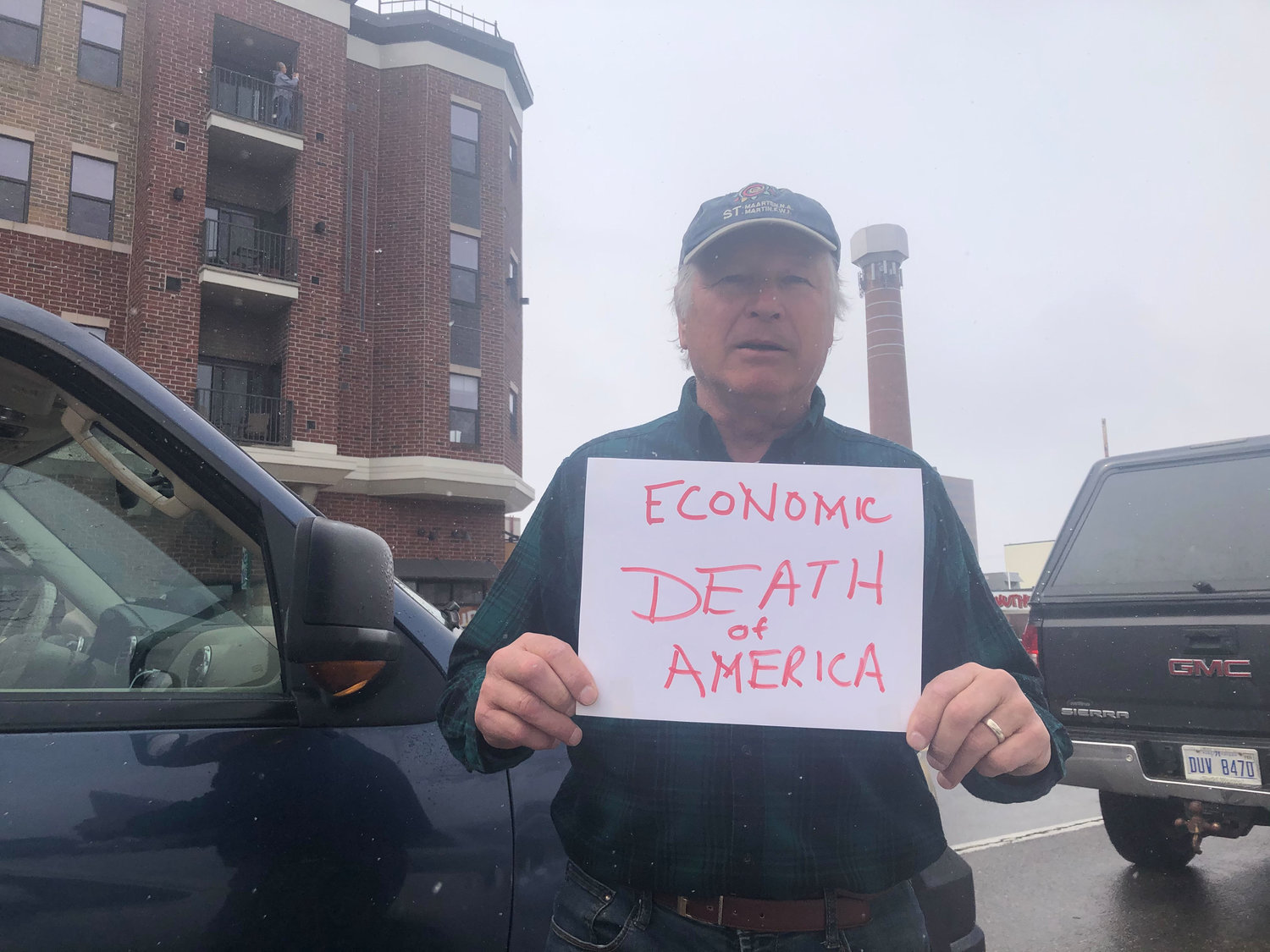 A man at today's protest with a sign reading "Economic Death of America."
Cole Tunningley A protester with a doll that makes Gretchen Whitmer appear as Hitler.
Kyle Kaminski
Previous Next
Posted Wednesday, April 15, 2020 11:37 am
Staff

Many defied social distancing mandates in Whitmer’s order, crowding closely together with rifles and signs supporting Donald Trump. Others stayed in their cars and trucks, some pulling construction gear, landscaping equipment and motorboats. Music blared from loud speakers.

Hundreds ignored guidance from the U.S. Centers for Disease Control and Prevention by not wearing masks or face covers, shouting about how Whitmer needs to be removed from office.

Rich Freiburger, owner of Rapid Concrete in Grand Rapids, parked his truck, complete with a Gadsden flag — with the slogan “Don’t Tread on M” — and Trump 2020 banner, at the Cooley Stadium as crowds formed. He said he’s missing out on at least $60,000 worth of business because construction is nonessential.

“I can buy liquor. I can buy lottery tickets. It just doesn’t make sense,” Freiburger added. “I’m capable of putting myself out of business. I don’t need any help from the governor. I really just want to survive. I didn’t work this hard in all this to be shot down and put out of business.”

Freiburger was among thousands who drove from across the state to demonstrate in downtown Lansing today as part of “Operation Gridlock.” The goal: cause a massive traffic jam and let Whitmer know that her executive lockdown has gone a step too far in Michigan.

Organizers at the Michigan Conservative Coalition told City Pulse last week that the order curtails far too many personal liberties and has crippled Michigan’s economy in the process. Hundreds just want to get back to work. Some want to travel freely across the state. Others want to buy guns, play golf or go boating. And many are just tired of being told what to do.

“It doesn’t make any sense to be bankrupting companies and industries and not consider the resulting impact on families as part of the public health crisis in Michigan,” a spokesman for the Coalition told City Pulse. “We’re the most restrictive state in the union right now.”

Whitmer’s order extends restrictions on many nonessential businesses operations and orders residents to mostly stay at home until at least April 30. Public and private gatherings have been restricted. Travel between homes — except to provide care for another — has been prohibited.

Others still sided with the “Woman from Michigan.” A protester with a “Go Home Rednecks” sign shifted the lockdown blame to the national level, instead pointing his finger at Trump:

“This is very unsafe. The only reason they’re not working right now is because their president did a horrible job resolving this issue in the first place. They can only blame themselves.”

Whitmer, in response to complaints, said that exceptions to the lockdown would only increase the chances that the virus could spread. Last week, she said it’ll be at least a few more weeks before Michigan can contemplate a return to normalcy as COVID-19 plagues the country.

“We are writing the plan so we can re-engage safely,” Whitmer said. “I want you to have your freedom. I want to have mine too. We’ll get to a place where we can be with our friends and family again, where restaurants will open again, where we can go back to work safely again.”

But assurances from politicians only go so far, at least with Michigan’s conservative crowd. Many of today’s protesters today likened Whitmer’s order to the authoritarian rule of Adolph Hitler — some have referred to the governor as “Whitler” — in Nazi Germany. Their goal: return Michigan to everyday life — and quickly.

Republican candidates campaigned to the crowd. A Fox News crew set up a camera in the back of a pickup truck. A pair of horses roamed the sidewalk near Lansing City Hall. A “MAGA” themed version of “YMCA” blasted from a large “Trump Unity” trailer blocking Capitol Ave.

Lansing Mayor Andy Schor said city and state police were there monitoring, but because the cars appeared to be moving, protesters were considered to be “legally driving on city streets,” he said. And local police — under a directive from Attorney General Dana Nessel — were subsequently not allowed to pull drivers over for suspected executive order violations.

Fire Chief Mike Mackey dispelled rumors that a patient had died in an ambulance that was stuck in traffic, noting that emergency vehicles had been strategically placed across the city to ensure that first responders weren’t stuck up in traffic and could still respond to scenes quickly.

Still, some elected leaders in Lansing pushed back against the temporary chaos downtown. Lansing City Council President Peter Spadafore called it a “brazen display of selfishness.”

“While visitors' lives may be affected by this order, their actions will have a ripple effect through Lansing and our state,” Spadafore told City Pulse this afternoon. “They are not practicing social distancing. They are not staying in their cars. There is a very real possibility that visitors will now spread the virus to all corners of our state and the epicenter will be this protest.”